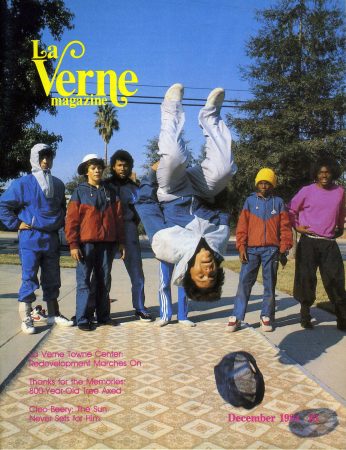 It’s 5 p.m. in Pomona’s southside, two clubs prepare to battle in the streets. Each group has eight teenage Black and Latino male members. The group from Ontario challenged the hometowners to the battle.

No guns, no chains, no knives and no physical contact was used to settle this score, only the smooth moves of dancing – breakdancing.

This acrobatic form of rhythmic movements is taking the place of gang violence for many in the streets, an idea inspired by rock star Michael Jackson in his music videos.

In La Verne they can be seen spinning on the floor at a Bonita High School dance. But the winning breakers in the area are a group of boys from Garey High School in Pomona.

“Last spring Vans Tennis Shoes called us up and asked us if we wanted to compete in the breaking competition at Knott’s Berry Farm;’ explains John Rizzi, activities director for Garey High School.

The school had no team, so, according to Rizzi, it had a tryout with about 40 competitors. Some local professional breakdancers did the judging.

“These eight won, got together and started practicing on their own,” explains Rizzi. “They came up with some routines.” 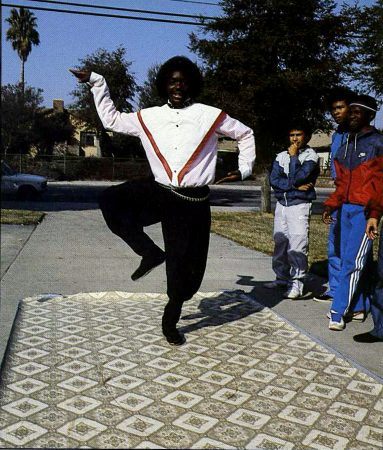 The first competition for the G Rockers was June 9. “They competed against about 10 or 12 schools and came in the top three,” Rizzi says.

Those top three and the top three winners from an earlier competition went against each other June 15, on the televised Knott’s Berry Farm competition.

“We won,” says the proud director.

The team spends a lot of time practicing, and still does. Members take this art very seriously.

“We practice every day for three to four hours,” says Gatson. “The outcome is worth it.”

“It gets us in shape and keeps us out of trouble,” ex­plains Sanders. “If we didn’t do this most of us would probably be in jail right now.”

Are there any risks involved in breakdancing?

Dr. Victor Ambrosini, a La Verne chiropractor, ex­plains that the spinning on the head routine by breakdancers is a possible danger.

“The entire body weight is focusing on the seven smallest vertebrae of the spine, which in turn can com­press on the spinal nerve,” he says.

Possible symptoms of damage are headaches, dizziness, nervousness, sore neck, tingling and numb­ness in the arms, hands and fingers, says Dr. Ambrosini. If these symptoms are felt, consult a physician for a proper diagnosis and treatment, he advises.

The G Rockers don’t have these symptoms because, as they say, “We know how to do it right.” 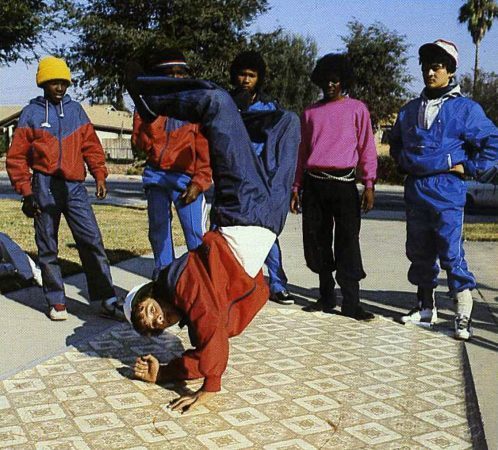 In the handstand position, Castro prepares for the Hand Glide. / photo by Tom Comeau

Breakdancing originated in the South Bronx, New York, in the poverty areas where built-up energy in the younger people was released by gang rumbles, riots and a heavy dose of crime. It has  been around for years. Its popularity sprouted in 1983 when the movie “Flashdance” came out. This movie and the film “Breakin’,” which followed about a year later, literally got the kids dancing in the streets.

“People pay to watch us dance in the streets,” says Gatson. People have written books on the techniques, the “how to’s” of breakdancing. Others have taught classes. The real way to learn this art of movement is the way the G Rockers and most kids learn.

Because of the floor contact, the spinning techniques, the proper attire is important.

“We wear loose clothing like sweats,” says Watkins. Because doing head spins on concrete is painful, not to mention idiotic, other types of floors are necessary.

“We use a slippery surface;’ comments Baker.

“If we break on the concrete we use a piece of linoleum, but if we are on carpet or a surface like that, we use a cardboard,” explains Gatson. 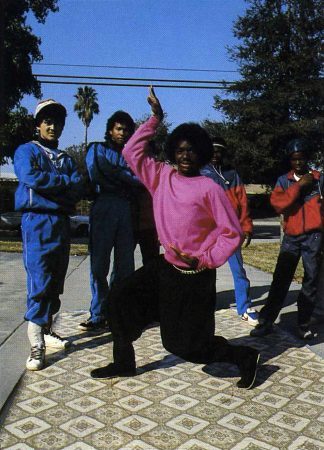 The group gives Sanders credit for being the best at “pop.” / photo by Tom Comeau

Pop is another kind of dance related to breakdancing. Sanders, who has been popping for five years, describes it as a “freeze frame” type of movement, jerking and “popping” type motions.

In competitions, Sanders does popping, because, he says, he does it best.

“You can only be good at one. If you try to do both you get too tired. You won’t progress any,” explains Sanders.

Since the winning of the contest the boys have seen a few changes.

“Since it’s happened, they are always here (school), and going to classes. They are recognized around school. It ‘s letting them be more well known,” comments Rizzi.

Recognition of their talent is what they want.

“We want to be in movies,” say the hopeful G Rockers in unison. At present they are looking for an agent to give them the chance.

After several windmills, a few airplanes and a flurry of head spins and some popping, the spectators applaud loudly for the hometown boys. The Ontario breakers return home in defeat. 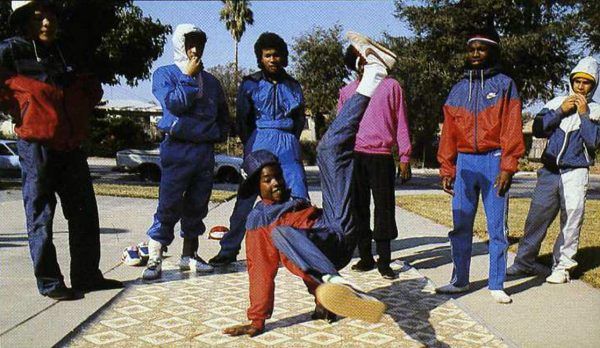 The youngest member of the group, Tyrone Baker, shows his “Breakin” talents. / photo by Tom Comeau

When you hear these terms and see these moves, you know you are in “Breaking Country:”

Fake or Weak: Not that good

The Head Spin: The dancer spins on his head with his hands in the air.

The Back Spin: Balancing on his upper back, the dancer pushes off with his hands and spins, then crosses his legs at the ankle and tucks them into his chest.

The Windmill: The dancer rolls on his upper back, spinning and making a scissors motion with his legs.

The Moonwalk: The dancer shifts weight from one leg to the other and slides backwards. This gives the appearance of forward walking on air.

The Hand Glide: The dancer balances on one hand, with the rest of the body in the air, and spins.

The Turtle: The dancer spins in the air while both hands are on the ground and legs in the air.

The Wave: The dancer moves all of his body, legs and arms in a rolling motion to make it look like a wave going through the body.

Locking: The dancer appears to laugh and pauses to lock joints between moves.

Popping: The dancer tenses one part of the body muscles and pops one joint out of line and back again. 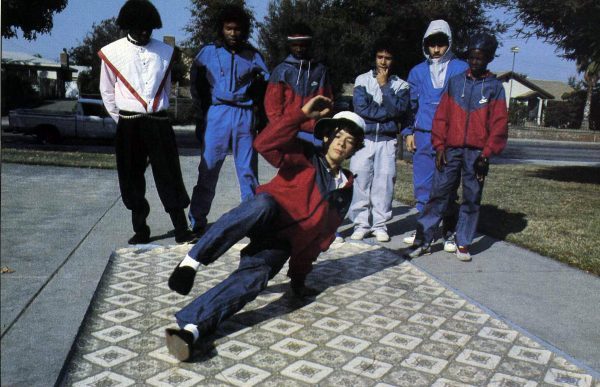 Noel Castro winds up to do a backspin. / photo by Tom Comeau 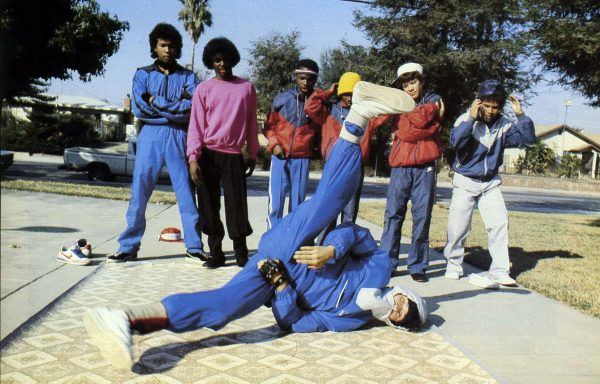 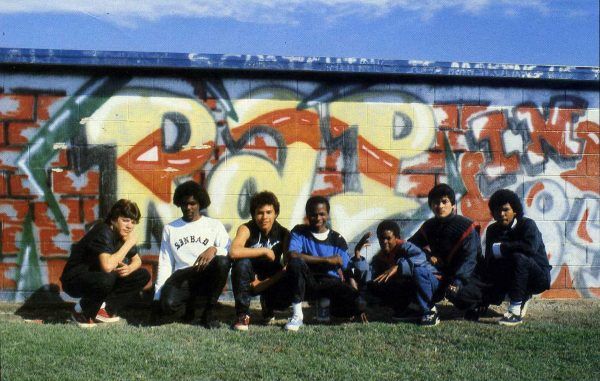 The G Rockers pose in front of a mural they painted at their school. / photo by Tom Comeau 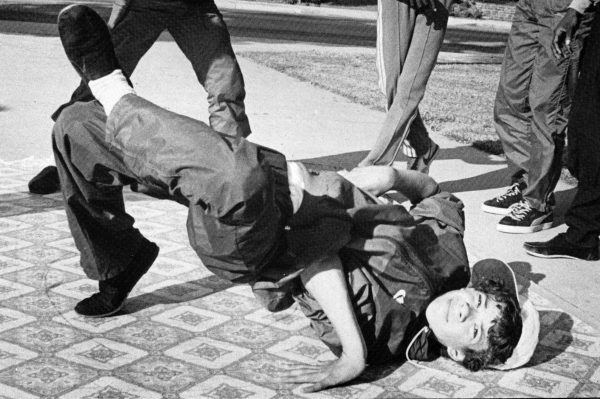 Coming out of a back spin, Castro completes it with a pose. / photo by Tom Comeau

Sanders shows he can “break” as well as “pop.” / photo by Tom Comeau 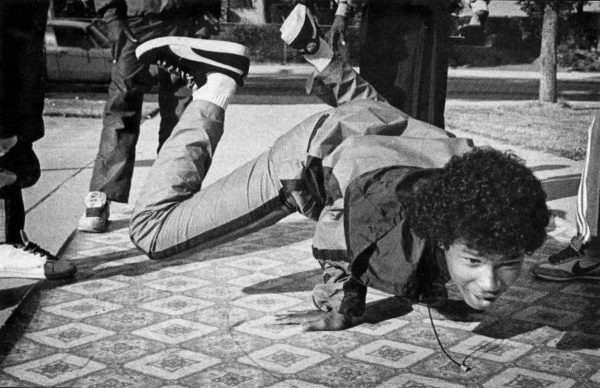 The Turtle Master, Tommy Watkins, does his stuff. / photo by Tom Comeau 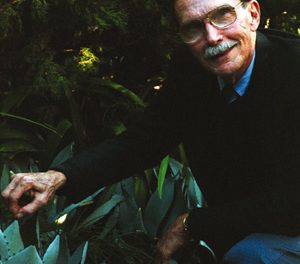 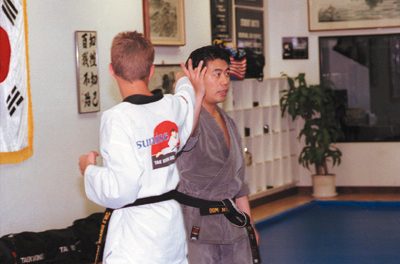 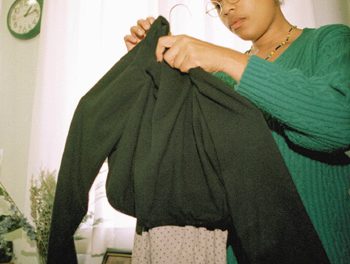