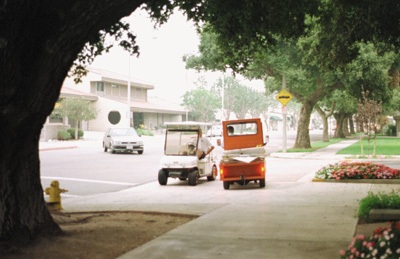 8:00 a.m. While making morning rounds, a blaze of orange and white carts streak the campus. Maintenance and security workers plow through their endless work orders and safety issues but stop just long enough to say hello. / photo by Heather Morales

Damp air and a still coolness stalk silently around the University of La Verne campus. With less than half an hour until sunrise, the University starts to yawn and blink her eyes. It is just the beginning of another day, but already there is activity, and people are busy on campus.

Security patrols the grounds for one last glimpse before the sun comes up, and individuals can be seen arriving one-by-one in the shadow of dawn. Faculty and staff who feel the need to get a jump on their day arrive at the baseball parking lot with an unhampered choice of any parking spot. After all, it is only 6 a.m.

The drowsy silence is suddenly broken as a trash truck appears to pick up the campus garbage that stays hidden within a secret “trash closet” in the new library building. Another day, another hundred garbage bags.

Dr. John Gingrich, dean of the College of Arts and Sciences, arrives for a game of tennis and parks in the shade of Miller Hall. He readies his equipment and then heads, racket in hand, to the tennis courts, his knee braces swinging down below his calves.

Three joggers, each on a different campus path and going different ways in life, breathe in the cool morning air during their daily workout. Davenport workers roll the Spots’ daily food allotment on carts to the Student Center.

Bob Rivera, assistant professor of speech, arrives in his powder blue suit with six students gathering around him for a 6:30 a.m. Toastmasters debate. Transfer student John Keller, although already 10 minutes late, takes his speech class seriously. “This one’s for Bob,” says a still sleepy Keller, as he scurries on his way.

A shrill horn blasts through the campus as the Metro rail carries commuters to their Los Angeles destinations and daily grind.

Armen Ananian, Davenport manager, smokes complacently, cup of coffee in hand. His day of food services begins yet again. After all, it is only 7 a.m., and Ananian has been on the job since 5 a.m.

More cars arrive, and commuter students can be seen facing their early morning classes, armed with a backpack and a cup of coffee. It is a trade off, that extra hour of sleep for that easy-to-find parking space.

Ian Davis, a sophomore from Rialto, likes to leave an extra half hour early to beat the west bound traffic on the Interstate 10 freeway. He arrives a little early every day. “I’m not particularly a morning person. It’s just something I have to do. I don’t mind the freeways at this time of day,” says Davis.

Davis wanders to the Student Center to spend time before class; yet another jogger is headed toward the ULV track. An elderly couple, both with walkmans on, tread slowly behind him on their mecca of a morning ritual.

By a quarter after 7, the campus is nearly teeming with life, but the crows are still placidly picking at worms on the lawns, virtually unaware of the impending busy day with bustling students who will soon chase them away.

The Toastmaster group disbands in a flurry of book bags and notebooks, as early morning debate is finished for at least another Friday. The President’s Dining Room will undoubtedly host another meeting before the day comes to a close.

It is almost 10 minutes after 7, and only one spot is left in the “C” street lot, a tiny space where a compact car can squeeze its way in between the masses of cars parked between the Wilson Library/Landis Academic Center and Miller Hall.

A glance toward Davenport, always busy at this time of morning with deliveries, reveals baked goods arriving from the “Old Country Bread” semi-truck.

A journalist’s work is never done as Andrea Gardner, junior, and a Campus Times Arts & Entertainment editor, finds her way from the Oaks A-top to the Student Center to help distribute the paper for readers at 7:20 a.m. Her adviser Eric Bishop, assistant professor of journalism, arrived earlier to disappointedly find his “spot” nabbed once again by an overeager commuter who pulled in just two minutes before him.

“I still can’t get the spot I like to get,” says Bishop, shaking his head as he unloads books from his car and heads to the Journalism Department in the Student Center.

Four cars wait impatiently as the once ample spots closest to all buildings are taken. It is only 7:30 a.m., and virtually every on-campus spot has been filled by staff, faculty and commuter students. The student who finds himself or herself commuting to a later class will have to search off campus or wait for a place.

The “Old Country Bread” truck driver causes more problems for desperate student commuters as he attempts to back out of the tight loading zone near Davenport onto C Street.

The wet dew dampens the grass and the air. The sun is up now. It is 8 a.m., and it will be warm in La Verne today. Lawrence Dawson, a freshman psychology major is late for class. He heads to World Civilization with Dr. Kamol Somvichian, professor of political science. “I plan on playing basketball this year, so I like to start my day early to get my classes out of the way,” he says.

Nine o’clock rolls around, and Rob’n Lewis, ULV switchboard operator, finds that the morning stillness can be measured in waves of sights and sounds. “It’s great. The solitude gets me ready for the day. It preps me. I feel like I have a jump on everyone else. It gets really noisy around 8 a.m. when faculty and students are passing through,” says Lewis, a third year CAPA student psychology major, who attends night and weekend classes.

Ananian enjoys yet another cigarette behind the dining hall as the morning rushes by. Dr. Gingrich, leaves the courts with his friend and heads to his car for his change of clothes, a fresh shirt and a busy day. 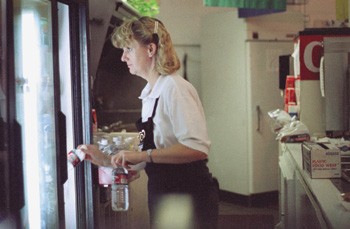 7:30 a.m. The pulsing iridescent glow of a new day reminds Jill Coverdale, the Spot’s supervisor, that she must ready food items for consumption during the breakfast hours. / photo by Heather Morales 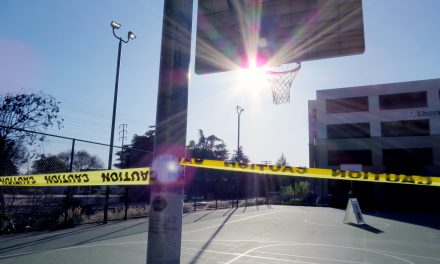 The Enemy Hidden in Plain Sight 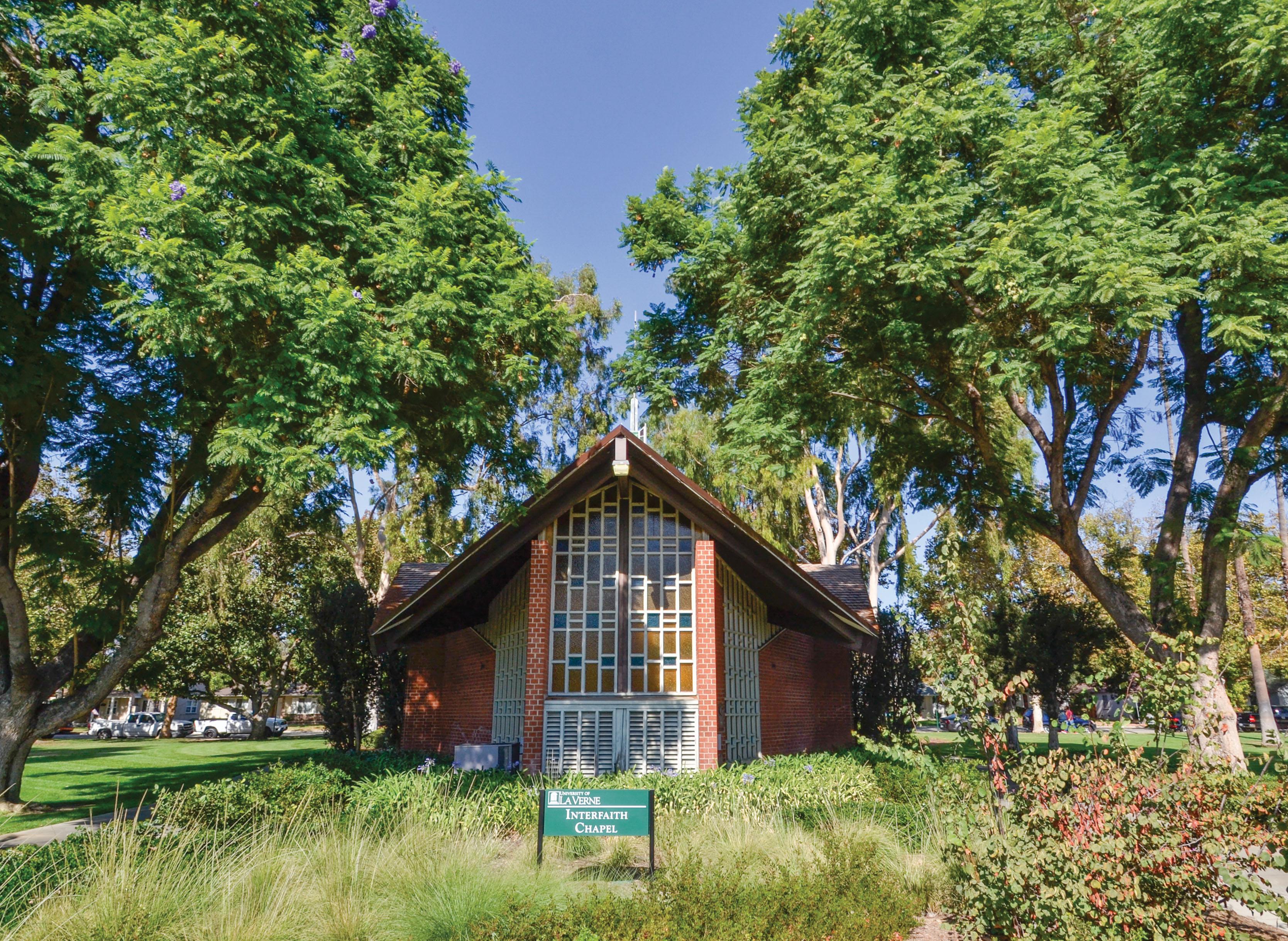 ‘A Space That Will Match Us’ 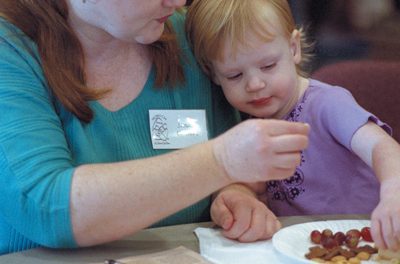