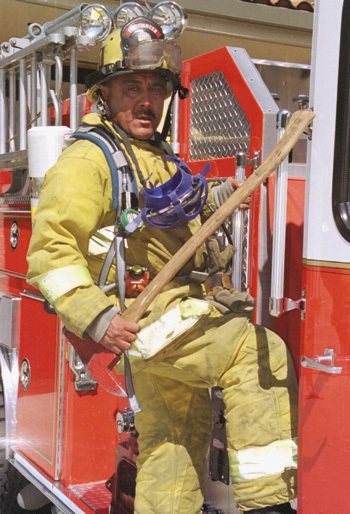 Proud of the community that he serves, La Verne firefighter David A. Castañon is fulfilling his lifetime goal. Castañon, a family man, chose to raise his family in La Verne after experiencing the benefits of growing up in this community. / photo by Rhidian Maehl

Inside the toy chests of American homes is usually a shiny red fire truck – complete with ladders and sound effects. For David A. Castañon, playing with this miniature version was not enough. He wanted to play with the real thing.

Following his childhood dream to become a fireman is exactly the goal that La Verne firefighter Castañon accomplished.

Castañon, 39, who was born and reared in La Verne, has held his position as a fire fighter for six years. He says he became motivated to join the fire ranks through his involvement in the ROP, a work opportunity program at Bonita High School. According to Castañon, this program was transferred from the San Gabriel Valley, and it offered a class that provided an orientation on fire technology. “During the first hour, it inspired me,” he says. “I got adrenaline right away, more than in any other class. The instructor was real good.” He recalls the instructor’s advice as being, “If you have the desire, you’ll make it; just stick with it.”

Besides this inspirational experience, Castañon also remembers, as a child, the sight of Santa Claus riding on a fire truck giving out candy to the children in the La Verne community. He proudly says that this tradition has stayed alive for 70 years.

After graduating from high school in 1977, he began to take as many classes as he could at Mount San Antonio College. He is still working on his associates degree in fire technology. “We always tell our young individuals who are trying to get on our fire service that in [this] service we’re constantly taking classes,” he says. “School does not end.”

Castañon took on the opportunity to work 10 years in the Metropolitan Water District as a mechanic until he became a reserve fire fighter and was eventually hired full time.

Although he had previous jobs before getting into his present career, Castañon never lost sight of his goal. “In my heart, I knew I was going to be a fireman in one way or another,” he says.

A major factor in Castañon’s decision to work in La Verne was that he grew up in the city. “That kind of opened the door for me and set me off to this [field],” he says. “I already knew exactly what I wanted to do in my life. I actually started here. This was the original station before they rebuilt the whole public safety building. Growing up in a small town community has been fun and very interesting, because everybody knows everybody here in town,” he says.

“I have ventured off to other cities, and this city is very special, because everybody takes care of everybody in this city. I love La Verne.” Castañon, whose father is from Texas while his mother was born in La Verne, says that his mom has been here since the city was called Lordsburg.

“She has seen a lot of things change in La Verne, from orange trees to the buildings and freeways coming through here,” he says. “La Verne’s gone through big transitions. I think we’re the tops as far as our local cities. La Verne’s battled the good and bad, and it is still a good, quiet community to live in,” he says.

By choosing to stay in La Verne, Castañon has developed a role with the community. “I am there to help out in any community function,” he says. These roles include working with the Drug Abuse Resistance Education, (D.A.R.E.) program, the Humane Society, fund raisers, Christmas programs and Fire Prevention Day, which takes place in the fall to offer the community awareness on public, earthquake, fire and home safety.

“I give back to the community what it has given me,” says Castañon. “I am just another supporter who is keeping the community alive.”

Castañon has never regretted his chosen career; on the contrary, he enjoys it to the fullest. “I love my job,” he says. “I look forward every day to come to work. There’s never been a day that’s been the same; it’s always different. It’s challenging, rewarding, and it motivates me more and more.”

Castañon’s self-fulfilling job consists of a full day that runs from 7:50 a.m. to 9 p.m. At 7:50 a.m., he meets for briefing. Here, the Department discusses the tasks that need to be done during the day with the first shift.

Castañon’s actual day begins at 8 a.m. At this time, he conducts discussions with his shift partners, as well as receives the plans for the day from his captain. This gathering is followed by 30 minutes of physical fitness.

After he showers, the team is assigned regular house duties, which rotate every four to six months.

Castañon’s personal duties on this given rotation are to take care of the downstairs area, including the parking lot, the conference room, the captain’s room and the chief offices.

After he receives his duties, Castañon normally does his regular station maintenance tasks. This task runs until lunch time. According to Castañon, his afternoons conclude at 5 p.m. after doing company inspections and special drills.

At 5 p.m., the crew usually shuts down. Then, they get ready for dinner and are in bed by 9 or 10 p.m. In the morning, they are ready to begin the day again.

Besides responding to fire calls, Castañon says that he also assists on all medical calls. “We’re EMT, so when we go on call, whether it is medical or fire, we work on patients,” he says. “We set up and pull the drugs out for the medics.”

Even though Castañon loves his job, he understands that it comes with some strings attached-the work shifts. La Verne fire fighters work two days straight and rest four.

Married to his wife Kathy and the father of two boys, Jeremy, 8 and Brent, 4, Castañon says that although he misses his children and his family on those long work shifts, they were prepared for all of the duties that a firefighting career entails.

“I knew that [the work shift] was going to take place,” says Castañon. “It’s just the way of life. I have no problem. They [the children] also understand dad’s a fireman.” He says that his wife agreed to his hectic work schedule when they first met and has been very supportive ever since. “She is highly motivated to back me up,” Castañon admits.

Aside from understanding and being prepared for the work shifts, Castañon is also fully aware of the risks that the career of a fire fighter faces.

“We’re in a dangerous job. But we’re all a team, and we all back one another,” he says. “So I have the confidence that nothing is going to ever happen, but, unfortunately, you always have that one percentage that something will happen. That’s the nature of the job.”

“I was more frightened for the residents that we pulled out on a big fire of that magnitude. It was frightening for the people in the houses that needed to be evacuated. We even had an evacuation plan ourselves, just in case the fire did jump the line and was going to burn us, as well as our fire trucks. I guess when you get something of that magnitude, it was a little frightening. But through training and experience, we were able to stop the fire at that point.”

In contrast, Castañon talks about his best experience-the day that he was hired as a firefighter for the La Verne Fire Department.

“I still get chills on my skin when I think about it,” he says. “I worked so hard on it. I put a lot of community service in the town, and my enthusiasm that I dedicated to the city paid off.”

Throughout Castañon’s career, he has had the support from not only his wife, but also his parents.

“They were very supportive as far as always heading me in the right direction,” he says smiling. “They made sure that my education was always there, as well as the community involvement.

“They’re proud of me for where I’m at, what I’ve done, and what I’m still doing.” Besides showing support, Castañon’s parents also provided him with the value to respect others.

“It’s unfortunate that the word ‘discrimination’ is there,” he says. “I never had a problem with it. I was raised that you get along with everybody, so I just took this attitude.”

“I would have tried to tell that individual that we are all together in this,” he says. “There is no use for this. It’s not going to go nowhere. It’s just going to become hatred and cause problems. “I had no time for that, so basically, I kept moving on.”

This was the attitude that he carried throughout his high school years. According to him, Bonita High School at that time had approximately 40 percent Latino students enrolled.

He was involved in a variety of activities and organizations, including Mecha Club, photography and sports.

Castañon’s commitment and participation played a major role in the process of traveling through his path of success. “What inspired me was a lot of dedication in community service,” he says. “I saw the light at the end of the tunnel. I enjoyed it [what I was doing] at the same time. I wanted to be a tool within the system.”

He adds, “I’m still not done. I am very high spirited and often give more of what’s expected of me, but it’s just me.”

Castañon also feels grateful toward his parents for raising him with not only the English language, but also Spanish.

“I feel it’s part of my heritage,” he says. “It’s part of me. I’m glad I can use it in society. The more languages you know the better. I thank my parents for that; for teaching it to me.”

Aside from the advice that his parents offered him, Castañon also acquired other valuable advice from fellow retired firemen.

“They gave me some words of wisdom,” he says. “I call it the four E’s. If you have exposure, education, experience and enthusiasm, you will succeed in this world. You’ll come on some stumbling blocks, but you just jump right over and keep going.”

With all the helpful advice that Castañon has acquired throughout the years, he gives out his own advice to today’s youth.

“Stay in school and get involved with the community,” he says. “Make yourself a part of the community. Make more contacts, because the more people that help you out, the more goals you will be achieving.”

Castañon is currently working at becoming an engineer, which is a higher level in the Department and whose job is to be in charge of the entire fire truck. He plans to eventually retire after putting in many years as a fireman.

In the meantime, Castañon continues to enjoy his desired profession, which involves operating a real life size fire truck. 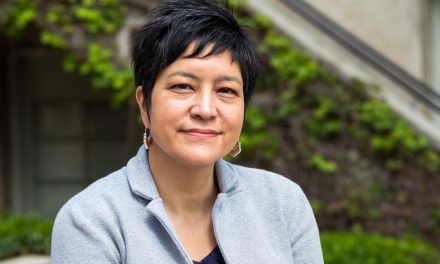 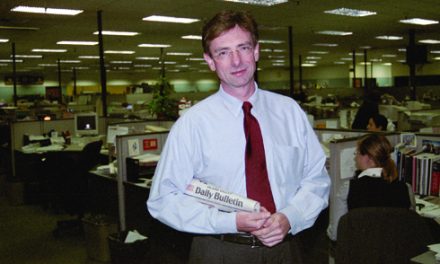 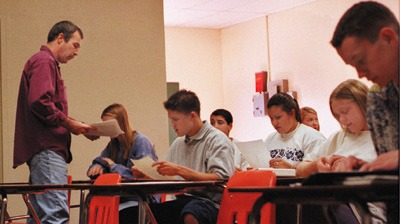 Booze … A Little Goes A Long Way at Bonita 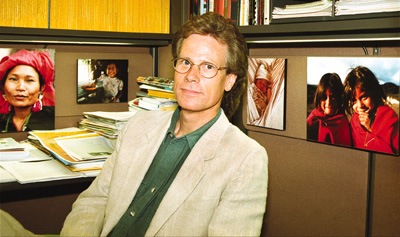