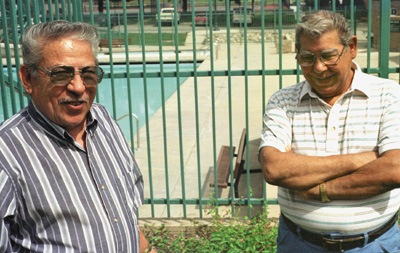 Locked out no longer, Pete Morales and Angel Castellano recollect a time when these bars that enclose the Ganesha Park swimming pool had more significance to race than on safety. / photo by Michael P. Bailey

“It was the coldest water you have ever been in. Man, it was cold!” For Pete Morales, ice cold water is but one of many memories that flood back when he looks at the Ganesha Park Pool.

The sun may be shining on this warm spring day, but the pool is closed. It is not the first time Morales and Angel Castellano, friends since childhood, have had to look through the fence at the water, unable to touch it.

The area has changed a bit since the last time these two friends have been here.

“It looks like they remodeled. It’s been redone, Pete,” Castellano says, pointing to the numerous new changes that the pool area has received in the past few years.

The pool, itself, is somewhat larger now, and the area where both men remember people sunbathing is now occupied by an enormous slide.

Yet, for Morales and Castellano, the very same gates that are closed today in spring remind them of the gates that were closed to them for most of their childhood.

Castellano and Morales both remember these days vividly- days when the gates were open, but Latinos were anything but welcome to “dive in.”

“We used to go there on Fridays,” Castellano recalls. “The Anglos used to go on Saturdays and Sundays. We found out later that this was because they would drain all the water on Friday with all the ‘dirt from the Mexican kids.’ Then, it would be refilled with clean water for the Anglo kids to swim in.” 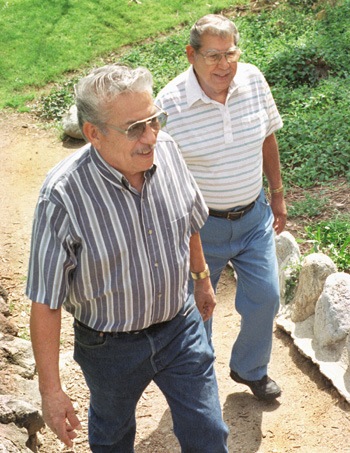 Retracing their footsteps to a painful segregated moment in the past, Pete Morales and Angel Castellano recall the time when Latinos could not swim with the Caucasian children at the Ganesha Park Pool. Latinos were forced to adhere to a “Mexicans only on Fridays” policy, while Caucasians were allowed to swim all weekend. / photo by Michael P. Bailey

It was that first fateful day when Castellano and Morales decided to take a swim that they realized the “closed door policy” awaited them.

“The girl who was taking the money said, ‘Wait, wait, wait a minute. You can’t go swimming in there.’ I just looked at her,” Morales explains. “I was only 9 or 10 years old at the time. I asked why I couldn’t go swimming, and she pointed at a sign that said, ‘Mexicans on Friday only.’ So, I turned around and said, ‘But my cousin just went in!'”

Castellano recalls the uproar caused by this. Morales’ cousin, Elias Lopez, a Latino, found his way into the pool-unbeknownst to the Caucasians who were swimming at the time.

“He was a Latino, but he was blond and blue-eyed like an Anglo. We used to call him ‘Chief.'”

The staff watching the pool allowed Lopez in but excluded Castellano and Morales because they, according to Castellano, “both looked like Latinos.”

Upon learning that there was a third member of the party with Castellano and Morales, a virtual manhunt ensued at the pool by the lifeguards for the Latino intruder who dared swim in the same water as the non-Latinos.

“Oh, my God! [The pool attendant] called the lifeguard, and she called three other girls who were working the pool at the time,” he says. “And they’re going all over that pool looking in the water. You’d think there was a snake in the water!

“And man, they were so mad because they must have spent about an hour trying to locate which kid they should throw out of the pool. ‘Chief’ finally got tired of swimming and got out. Boy, that was funny!”

It was this incident that first caused Morales to question racism and segregation.

“When you’re 9 years old, you don’t understand, you know? I couldn’t understand why,” says Morales. “I couldn’t go in and swim, so I thought to myself, ‘Maybe they thought I didn’t know how to swim.’ Why would they do this?”

Perhaps it was simply the wide-eyed innocence of children that protected them up until then.

Regarding the separated swimming days for Latinos and non-Latinos, Castellano chuckles, ” I used to think it was great that they would put a special day aside only for us!” 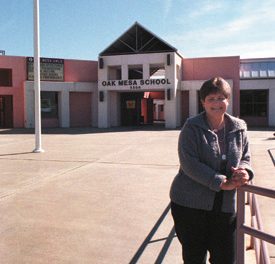 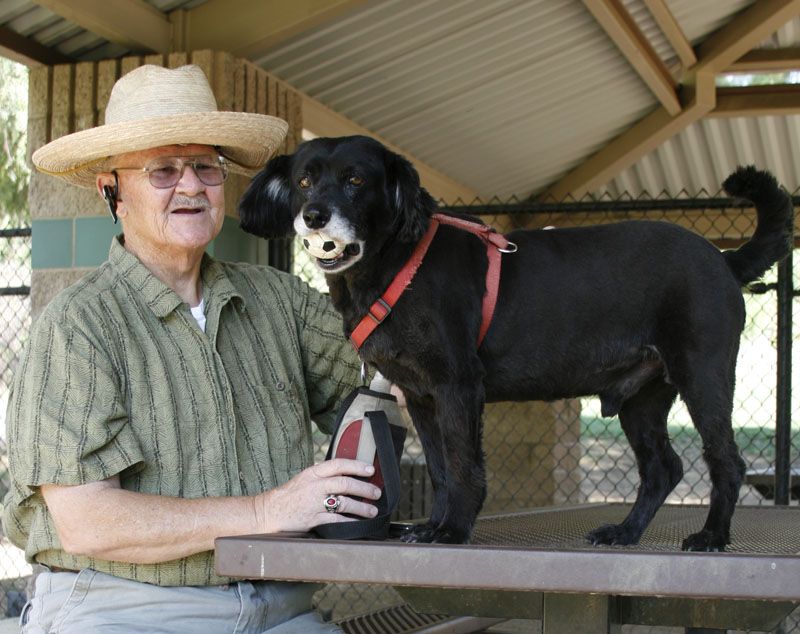