by Rob Strauss
Editor in Chief

The big fishpond with the goldfish swimming playfully… the relaxing beanbags… the closet full of crackers that would provide an entire day’s snack for a hungry stomach. These are my most vivid recollections of the visits I used to take with my sister to my grandmother’s business when I was young. “Esther’s Typesetting” was my grandmother’s career, but to me it was a 7-year-old’s playground.

Typesetting was the industry that heralded the computer graphics industry. My grandmother put in long hours trying to make it a business of which she would be proud. Using two Compugraphics machines — one for body type, another for headlines — she would set type for fliers and posters, which would eventually be sent to a printer for reproduction. With its home in the hot, dusty city of Palm Desert, Calif., it provided a small-town touch where the owner was not only a businesswoman to her many customers, but also a friend.

This was what made me fall in love with La Verne on my first visit to the University in 1994. The red and white stripes of the barbershop and the neighborhood police and fire stations provided the small-town touch and sense of Americana for which I had been searching. It gave me the feeling as if I had walked into a past era where I could go down to the street corner and visit a soda shop with its long slick counter and a jukebox playing the day’s hits.

This was not 1962, though. It was 1994, and the local soda shop had been replaced by the corner pizza parlor. There was also a small doughnut shop, a dry cleaners and a now defunct old book store that added to the “everybody knows everybody” atmosphere.

The employees knew the customers by more than just their faces. The workers knew people’s names, and they knew them through the various conversations they had. I would walk into many a shop as a complete stranger but not feel that way coming out, as many of the employees would try to make conversation with me. For me, it was reminiscent of seeing my grandmother with her clients. The customers were not just numbers or another source of profit. They were more special than that.

So what became of my grandmother’s enterprise? As happens with many small businesses, “Esther’s Typesetting” is no more; my grandmother is now retired. The business lost out to the computer revolution in 1989 and a print shop now stands in its place. She now only has one business card remaining as a reminder of the company she used to own. Technology has been the demise of many businesses as they strain to stay even with the ever-changing scientific world. Some, like Z Graphics have been able to change with the times and, as a result, stay competitive.

That business on 73744 Highway 111 in Palm Desert will always remain a special memory to me. Every time I walk through the streets of downtown La Verne, I think of the many times I sat on a beanbag with a Ritz cracker box in hand, watching my grandmother do business the old fashioned way. 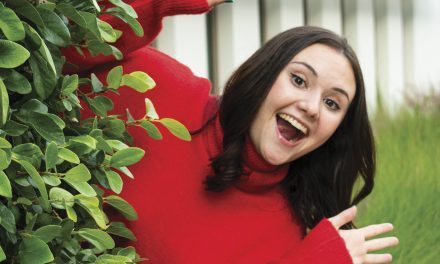