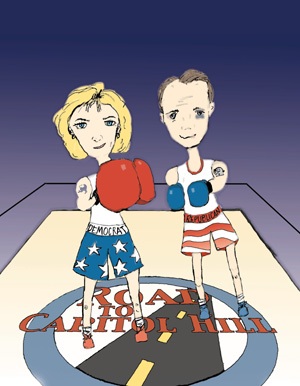 As he speaks, he props his elbows on the table in front of him; his hands meet at the finger tips. Congressman David Dreier (R-San Dimas) sits coolly in his seat in the office of San Dimas’ mayor, a temporary repose from his legislative duties. He is confident, self-assured. For nearly 20 years (10 terms to date), he has represented California’s 28th Congressional District.

It is a diverse area physically and ethnically, stretching from Los Angeles County’s east border at Claremont, west to parts of Pasadena, and from the San Gabriel Mountains south to La Puente. La Verne falls on the east side. Dreier feels he is poised to keep his seat well into the next millennium.

But in comes the competition. Time to cue the “Rocky” theme song. She is a medical doctor and professor of pathology at Los Angeles County’s USC Medical Center with ambitions to unseat the long-time incumbent. Janice M. Nelson took on Dreier in the 1998 election and lost. She is primed to take him on once again in 2000. She is the long shot with nothing to lose.

“I will win her by an even larger margin because of the job I’m doing,” Dreier says of Nelson – but not, perhaps, without a fight.

When Dreier first set foot in the Capitol Building as congressman to represent the 28th Congressional District, Hill Street Blues swept the Emmys, and, a month later, Lady Diana and Prince Charles of Wales announced their engagement. Dreier took office at the same time the first movie-star president was elected.

Before cable television and the World Wide Web, when Madonna was a non-entity, and Star Wars meant the movie, Dreier was a young 28-year-old fresh out of Claremont McKenna College and ready to take on the world. Since then, he has witnessed the crumbling of the Berlin Wall from his seat on the floor of the House and the historical impeachment of President Clinton. The Missouri-born Congressman has steadily climbed the leadership ladder to take a prominent role as chair of the House Rules Committee. As a self-described traffic cop of sorts, he sets the agenda for the 435 representatives and by proxy the American people. He can summarize his agenda for the American people extemporaneously, preordained by him and the powers that be-the Republican Congress. On the agenda for the 106th: improve public education, offer tax relief to the working class, save Social Security, mediate reasonable defense capabilities.

The once young figure has aged well. His press photos do not reflect the signs of age, the gravitation of gray to the temples and the hairline creeping ever so slowly backward.

He is pleasant, even cordial to his staff and constituents. When he addresses them at a small business exposition organized by his local staff, he uses statistics to illustrate his ideas. “99.7 percent of job creation comes from small businesses,” he says to the audience. He transitions into conservative speak. “I’m one who believes we should reduce the size of government and free up small business from burdensome taxes,” he says to the modest gathering. “I’m just one who believes small business is limitless.” He thanks his staff by name and leaves the expo to its agenda. He is sporting his patriotic red and blue tie with chunky diagonal stripes, a white dress shirt and dark suit. When he walks out from the assembly, he spots one of his staffers and realizes he failed to mention her name in the list of thank yous. He acknowledges his faux pas and apologizes to her. He is sincere, and she assures him that it was no problem. On to the next item.

Just like bankers must love money and poets words, Dreier’s pastime is politics. It weaves the threads of his life, half of it having been spent on the floor of the House. He exudes confidence pushing arrogance. Grocery shopping…nah. Fast food…maybe. D.C. power lunches…definitely.

“I like working in public service,” he says. “I’m fascinated with politics in itself.” The former high school student body president interned with a congressman when he was attending Claremont McKenna College. “I felt strongly about some political questions,” he recalls of his decision to run. His college friends encouraged him to make his bid for office. He lost to the incumbent in his first attempt in 1978.

Dreier is succinct, serious. In his own matter-of-fact way, he says he knew he was representative to the district when they told him he won 52 percent of the vote.

While the district has generally voted conservatively, neither the Republicans nor the Democrats hold more than 50 percent of the voters. About 14 percent of the registered voters are independent, according to Martin Weinberger, editor and publisher of the Claremont Courier and immediate past president of the California Newspaper Publishers Association. He has observed the changes within the district as the Courier’s top guy since 1955. “It [the district] is not as conservative as our congressman, who is one of the most conservative members of Congress,” he says.

Weinberger discounted Dreier’s prognostication of an easy win in 2000. “Janice is very energetic. She’ll do better,” Weinberger predicts of Nelson’s chances, “at least in the 40s,” he says. “She has a very big nut to crack because it’s very difficult to oust an incumbent because of the money. He’s been able to collect a lot of money through congressional contacts.”

Time has also brought changes to his district. The demographics continue to shift. The composition reflects diversity – 24 percent Hispanic, 13 percent Asian, 10 percent “other” and 6 percent Black. In the past, the district has been considered a safe haven for the Republican incumbent.

Dreier talks about how the nation is reaping the rewards of the Reagan legacy today. “It’s true the deficit went up . . . but because of the spending on defense, we are able to spend $150 billion less because of Reagan and the Cold War,” he spins. Back in his early years, most information came across the fax. Dreier acknowledges the burgeoning role of the Internet. “It’s a very important force,” he says “and one that needs to be encouraged. I want to take every step I can to broaden and encourage that.” 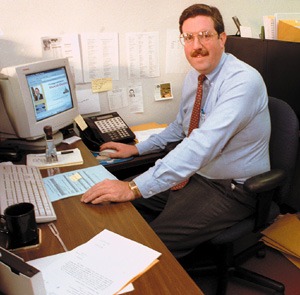 Mark Harmsen, 43, started work at David Dreier’s Covina office in 1985. Calling it “a tremendous honor” to work for the congressman, Harmsen serves as Dreier’s district representative, supervising the office and handling his schedule. / photo by Jaime Ortega

The impetus for Dreier’s first bid for public office was his belief that his predecessor was not addressing the needs of his constituents. “He had a pattern of saying one thing in California and doing something in Washington,” Dreier says of his previous competition. It is that same contention that Nelson, Dreier’s competition, believes he is guilty. “Dreier has a way of saying something exactly the opposite of how he votes,” she says.

Nelson offers stark contrast to Dreier’s agenda. She’s in her late 40s, two years Dreier’s senior. A frosty blonde, Nelson dispels any stereotypes associated with her hair color. She reads five papers daily. She is married with no children. In her first bout, she took home 39.3 percent of the popular vote to Dreier’s 59 percent. She spent $122,000. He spent $893,000. “[This district] needs to improve education and have better access to quality health care,” she says. “We still need to work on pollution — both air and water.”

“Dreier is one of the holdovers of the Reagan Administration,” Nelson says. “People are sick of partisan politics; they’re sick of talking heads,” She is bound to her cause. “Some believe we’re going to break through the Republican glass ceiling.”

She talks about her campaign issues. They have a decidedly democratic slant. “Health care is going to be the No. 1 issue,” she says. As a physician at Los Angeles County’s USC Medical Center, she says she has seen first hand the need to separate government from imposing restrictions on decisions made between a doctor and her patient.

Claremont’s Weinberger sports a brown bow tie as he delivers the grim reality Nelson faces against her GOP competitor. “For now, it’s going to be quite difficult,” he says. “His name is quite familiar. He has a lot of money. He does a lot of marketing. Generally, he reaches a lot of people. When you add up all those things together, it makes it difficult for a challenger.”

But as Dreier himself proved 20 years ago, the task is not impossible. 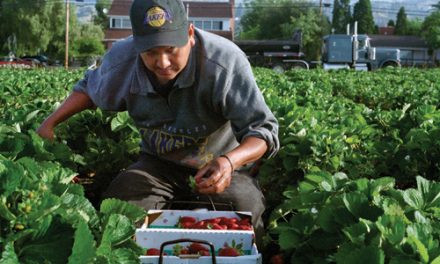