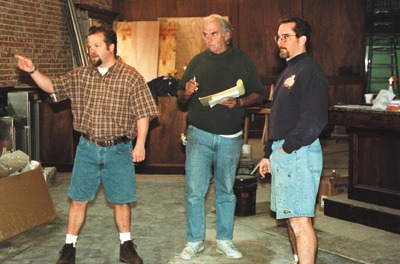 Boyhood friends Jack Franklyn III (left) and Tony Spencer (right), co-owners of the new downtown restaurant Heroes, discuss plans with Larry Richardson (middle), a sign artist. “I’ve been wanting to own a restaurant for 10 years,” says Spencer. “The small size of this store is perfect,” says Franklyn III. The co-owners are getting help with the construction from their families and friends, and are giving the restaurant, formerly the University of La Verne Bookstore, an antique look. Heroes was scheduled to open in early May. / photo by Naoko Yokota

What once was the University of La Verne Bookstore in Old Town La Verne has become an upstart restaurant named Heroes, which is co-owned by longtime friends Jack Franklyn III and Tony Spencer.

“I’ve been wanting to do this for 10 years,” says Spencer.

Both entrepreneurs grew up and met in Orange County, where they found their love for the restaurant business early on.

Taking separate routes after high school, Spencer went on to earn an associates of arts degree while working at a Sizzler in Orange County, while Franklyn III immediately dove into the restaurant scene through bartending and waiting on tables at Magnolias Peach.

“It’s something me and my buddies all did, because it’s decent money for not having an education,” says Spencer.

“If he [Tony] had the money, he would have done it [built a restaurant] in Claremont,” says Roy Spencer, Tony’s father.

Now the two friends have come together in hopes of making a third Heroes restaurant in Southern California a success.

“It is the thrill of accomplishing something,” says Franklyn III. “I have built all my own stores with the help from family and friends.”

Franklyn III, originator and owner of a Heroes in both Fullerton and Claremont, agreed on the perfect fit for Heroes in Old Town La Verne when city manager Martin Lomeli informed him about it.

“I told them it was becoming vacant and he [Franklyn III] said ‘you’re kidding,’ ” said Lomeli. “I put him together with the property owner and they negotiated the lease. I then put together a proposal agreement for redevelopment assistance, and it was ultimately approved.”

Even though there are six other restaurant in the Old Town area, Lomeli believes that Heroes will compliment the others.

“I think they compliment each other tremendously,” said Lomeli. “It’s a neighborhood bar and grill, and La Verne is a family-oriented, community-oriented environment that I think they [Heroes] will do fine.”

Lomeli remembers his childhood days biking to Old Town La Verne and going to the Frosty Freeze and Five and Dime stores. Now he is trying to recreate that old feeling by maintaining the history of the area.

“I am trying to recreate that feel for all of La Verne,” said Lomeli. “I hope Heroes assists me in my goal, and I think they will.”

The location and size of the 5,000-square-foot area and patio is opportune because of its historical background and its dimensions.

“This store is the perfect size,” says Franklyn III. “I am a firm believer of keeping it small.”

Heroes is a family restaurant and bar that has a 100-year-old look and feel. When one walks into the restaurant, a warm varnished glow envelops the eye as the glimmer of the booths and bar tops glisten. Accompanying the old-time feel will be New Orleans Blues filling the restaurant.

“I want families, everybody, we are going to have a half dozen high chairs,” says Franklyn III. “We are a restaurant first, then the bar takes over.”

Heroes will specialize in lunch and dinner, not breakfast, according to Executive Chef Phil Bribiesca. Working for Heroes the past 10 years has been a great joy for Bribiesca, who has been given free reign to create unique meals and specials.

“It’s exciting, it’s definitely a different challenge,” says Bribiesca. “The menu is a base menu that we have that rotates around a lunch menu and a dinner menu. I always bring in different specials, and a lot of my time is spent looking at new recipes. My favorite thing to cook is probably the pastas.”

Some of the new recipes could be considered exotic, although Bribiesca humbly denies it. For example, part of the dinner menu concentrates on fish, which includes: halibut, mahi mahi, blackened salmon and New Zealand snapper dishes. The other main course for dinner includes steak dishes: porter house, top sirloin, prime rib and a refined meat loaf. Don’t worry about the portions, because Bribiesca assures that they will be huge.

“Big is an understatement-huge, huge portions of food for a great price,” says Bribiesca. 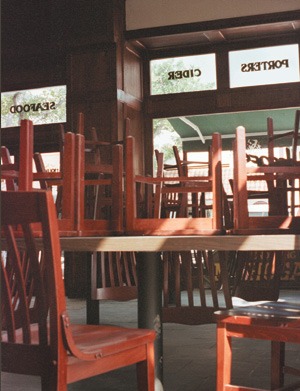 “We want the inside to seem like it’s been here for 50-60 years,” says Tony Spencer, co-owner. “We want an old-fashioned comfortable feeling. Heroes is a home away from home where friends meet,” says Jordan Frank, manager. / photo by Naoko Yokota

Quality and quantity mesh as Bribiesca understands his clientele is the working individual and their family. For lunch, Bribiesca’s recipes call for the traditional soup, salad and sandwich. Everyday sees a different special as he tries to mix up the variety. Bribiesca credits knowing his customers wants and desires as the reason for his success.

After attaining the location, Spencer and Franklyn III worked to remodel the inside to make it look old fashioned. This task was accomplished by varnishing the plywood infrastructure, while arranging copper-colored metal as the background of the bar. The chairs and tables, although not plywood, are also varnished.

The glow of the restaurant has a feel best displayed by the late 1980s hit sitcom, Cheers.

“We are not professional stainers or painters, but it gives it that warm feel to it that makes it seem like its been here for awhile,” says Franklyn III.

Both owners encourage patrons to bring in their old black-and-white wedding pictures to add to the atmosphere and spirit of the restaurant. The reason for the pictures correlates directly with the name of the restaurant-Heroes.

“Where Heroes comes from is my parents,” says Franklyn III. “I look at my folks and go, Man I got through life, it’s awesome.”

Spencer and Franklyn III, both of whom are in their mid-30s, did not want to go with a sports theme even though the name may suggest it. Heroes will still bolster six televisions and a few black-and-white photos of sports figures, according to Franklyn III.

To top it off, the bar offers 65 different draft beers as well as spirits and wine. Spencer and Franklyn III began remodeling last November with the help of family and friends, and hoped to have their doors open in April to the surrounding community.

Spencer, who is married and has a young son and daughter, has never owned a restaurant. His experience in managing came when he helped Franklyn III run the Heroes in Claremont.

“He is an honest, straight laced guy – good looking – what else,” says Franklyn III humorously. Franklyn III is also married and has two young children of his own.

“Both of them are extremely honest, good people,” says Roy Spencer.

Paper work and “red-tape” can be a great hassle for new businesses, but these two owners handle it with ease.

“You have to be patient, because there is a lot of paper work,” says Spencer. “You have to go through the Alcoholic Beverage Control to get your license, and all the other things before you get started.”

Hard work is nothing new for Spencer and Franklyn III, who have put many hours into constructing the interior of Heroes.

“I have about four or five hundred hours in this place myself,” said Spencer, in early April.

The co-owners rounded up family and friends to help with the construction so that they could keep the price of “hired hands” down.

The family spirit Heroes promotes also extends to the public, as it gives to charities and fundraisers. “We do give back quite a bit to the community,” says Franklyn III. “Whenever there is a fund raiser or charity drive, we are the first ones in line.”

A tradition among restaurants is to have an official team, so Heroes has decided to follow suit.

Both owners believe in opening slow. This means that there will be no advertising, so that the staff will not become overwhelmed.

“I am a firm believer of opening up slow,” says Franklyn III. “It’s just to make sure we do everything right. “One of the nicest comments I have ever heard was from a party of four women that said, ‘It’s refreshing going into a restaurant for the first time and they have their act together.’ ”

The co-owners will undoubtedly use the slow but progressive approach. For them, a new chapter in co-ownership will blossom as their lives’ working for Heroes continue. 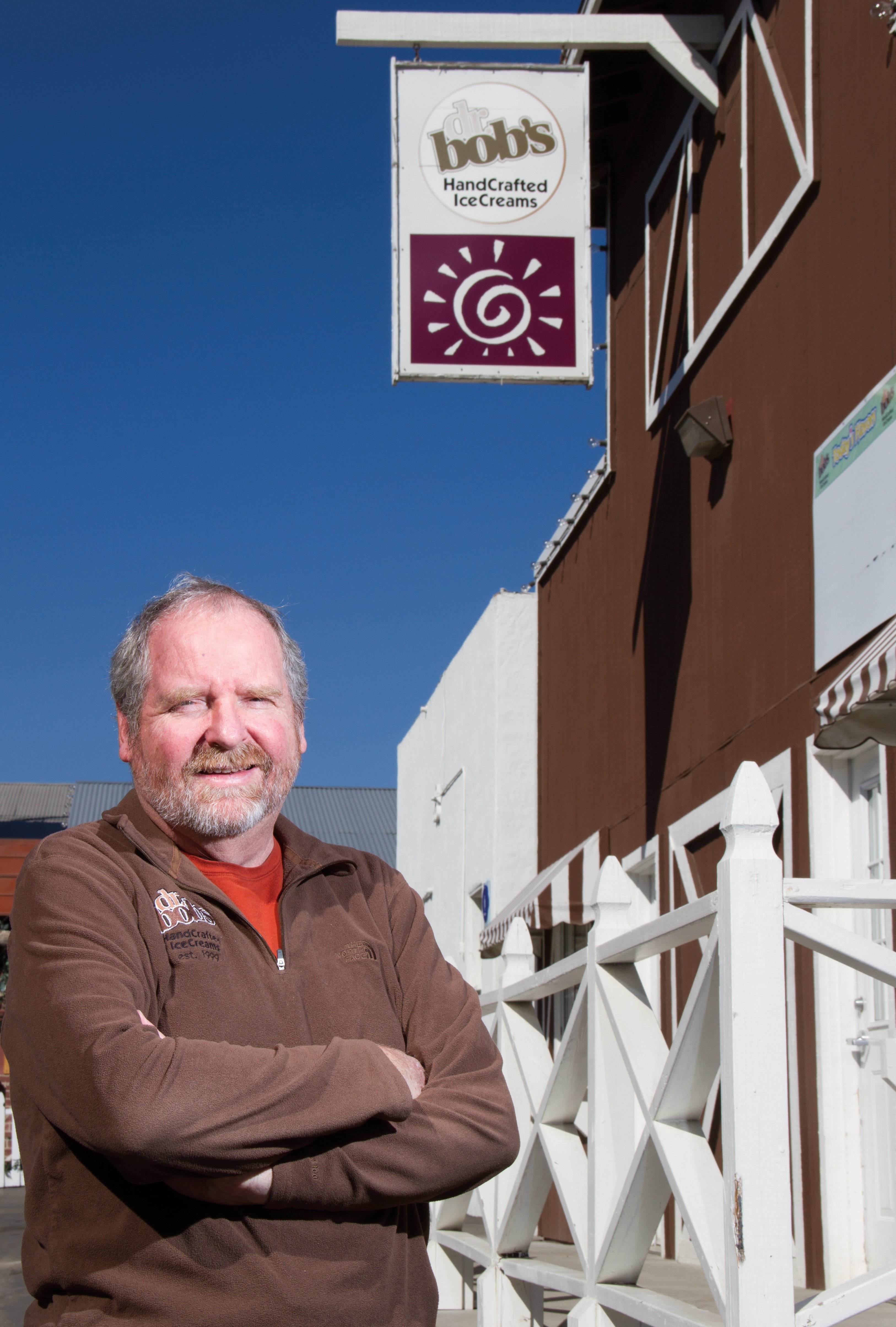 The dean of ice cream 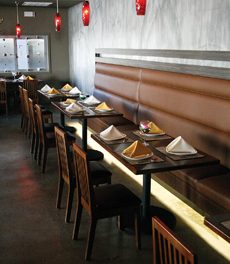