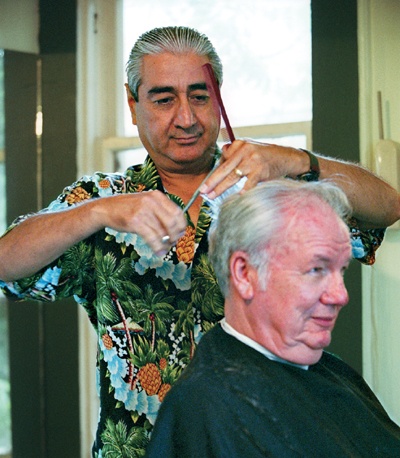 In his downtown red Bonita Avenue house is where La Verne hair stylist Abel Gandara can be found between clients like Orval Kidwell (above). Abel, a barber for 36 years, graduated from San Bernardino’s American Barber College. A 1966 Bonita High School graduate, he received a $100 Bonita scholarship toward his trade school education. / photo by Liz Lucsko

Just east of D Street, at 2138 Bonita Avenue, is a century-old, two-story house, with picture windows that act like reflecting eyes. Inside a former living room, now colored with green painted floors and green walls, sit two barber booths, diagonal from one another. “Oldie” tunes play on the radio in the back room, softly traveling to the front area where salt and pepper haired Abel Gandara sits silently reading. Here, he patiently awaits his clients and appointments. On bright and sunny days, he may be caught porch sitting, reading the paper, waving and talking to locals as they stroll by.

Consciously or subconsciously, inner feelings sometimes compliment outer appearances. When sitting in the chair for La Verne’s good friend, Abel Gandara, a complete transformation toward a more positive outlook is something encountered at “Hair Beauty and Beyond.”

Talking to him for the first time is like talking to an old friend. He has a natural coolness about him, and it seems that it is in his nature to be so friendly. Though his thick dark eyebrows punctuate his face with an expression of seriousness, he admits that being friendly and maintaining good relationships with one’s employees and clients is important. “In this type of business, if you don’t get along with the people you work with, it’s, ‘See ya later,’ ” says Abel.

Abel, 55, La Verne native, has been working as an area professional barber for 36 years, but has only been on Bonita Avenue for two. Richard Heminez, 15 year client, explains the comfort, commitment and friendship developed with Abel through the years. “I enjoy the fact that I can say whatever is on my mind. Abel’s a really great guy, and it has come to be more of a friendship beyond the business.” He adds, “Abel’s outgoing personality and shared laughter make going to the shop like going to a comfort zone.” Eddie Contreras, good friend and 10-year client, admits that he has received nothing but the best of service. “He makes you feel at home,” Contreras says. “Abel’s willing to bend and work later times, putting his clients first; his service is friendly, and he makes you feel good.”

His other clients summarize what distinguishes this shop from the rest: excellent service, exclusive atmosphere and, of course, the friendly Abel. There is no doubt that Abel is a professional at sculpting the outer appearances of people while also bringing out their inner beauty. With his charming and humanitarian personality, it is no wonder his clients have maintained their long-term relationships. Abel is committed to his clients, and this commitment, along with the exclusive atmosphere of the shop, makes his barber shop and this man authentic.

Confidentiality is also an important aspect of his client relationships. To be able to sit in a chair, escape troubles or worries while being pampered, to be able to vent and let out one’s emotions to someone who’s really listening, is something that everyone may need from time-to-time. So while cutting away on the outside, Abel and his clients also cut away at the inside, sharing inner stories and exchanging conversations with words that remain only where they are spoken. “What gets talked about in my chair remains in my chair,” says Abel with certainty. “It’s a stress reliever, and it works both ways.” To thank his clientele for their patronage, for the last 14 years, Abel has sponsored a free cookout with bacon cheeseburgers and beer in front of the Bonita Avenue salon. This barbecue is held on the July fourth weekend. He started this tradition back when he owned his shop in San Dimas and has been doing it ever since, he says.

Memories abound as he reminisces on his growing up years in La Verne. He returned home in 1969 from the Vietnam War after being drafted into the army and serving two years. As he walked down La Verne’s residential streets as a courageous man of honor, uniformed, duffel bag in hand, he remembers, “I could see all of the housewives in the neighborhood looking outside of their windows with fear in their blurry yet anxious eyes, to see whether I was one of their sons.” His dark eyes stare deep into the past. He holds an impressive ability to remember things as if they occurred just yesterday. With memories of the past so vivid in his mind, Abel can recall insight that may seem insignificant to some and yet mean a great deal to others. “It is the conversations like these that make my job most interesting,” he says.

Prior to working at Hair Beauty and Beyond, Abel served in several other shops, including his own San Dimas salon, “Abel and Friends,” which he owned for 11 years. Unfortunately, rent increases forced the shop’s closure. “I was fortunate, though, because I was known around town. Owners would come up to me and offer me a spot in their shops.” So when Michelle Vasquez, owner of Hair Beauty and Beyond, approached Abel with a place to practice, he accepted.

Abel has clients of 36 years running and has watched their transition from boys to men-men who now bring in their own boys for hair cuts. “In this business, they come and they go,” Abel says sadly. “It’s sad when clientele of many years pass away.”

Since he was 15 years old, Abel says he has wanted to be a barber. “There weren’t any styles back then-men couldn’t get perms or waves-and I wanted to be able to add style to barbering,” Abel says. “Many barbers didn’t go to school, so they missed out on knowing how to style.” He remembers Foothill Boulevard being lined with barber shops but hardly any men getting perms. Seeing the Los Angeles Rams play at the Los Angeles Coliseum and seeing how their hair was done in styles was fascinating and inspired his goal to be a barber, Abel admits. “Since men usually do not want to come to get hair cuts where women are present,” he added the “macho spin” to the salon, placing an outside barber pole to attract the men.

Outside of work as a barber he is also a husband. Overwhelmed and excited when asked about his wife, he tells the story of how he was married Sept. 29, 1997, a day before his 50th birthday to Jennifer Gandara. Although his decision to get married was a spontaneous one, Abel delightfully expresses how wonderful marriage is. “If I would have known marriage was going to be this great, I would’ve gotten married a long time ago, and I’m not kidding!”

Cooking is another passion of his. He can name recipe after recipe from memory, seemingly, for any kind of food. But barbering remains No. 1, he says. What is his 10 year plan? “Doing hair-I see myself doing hair until there’s nothing left of me.”

As a barber, Abel is self-employed so there is no retirement plan, but he says it does not bother him, and in fact he is carefree when he says, “You just have to take care of it on your own.” Abel has never thought of leaving “home sweet home.” Easy to say, his response to the question of leaving La Verne is, “Move away? I love La Verne!” 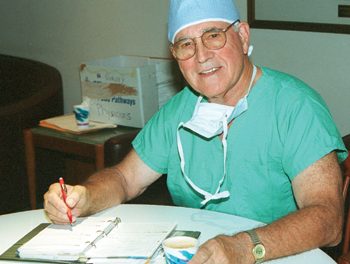 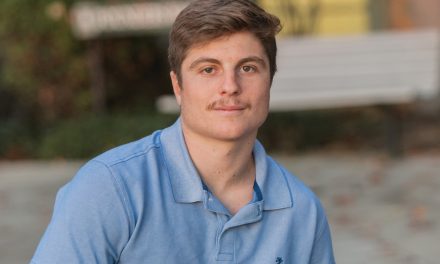 Exploring the Path of Life