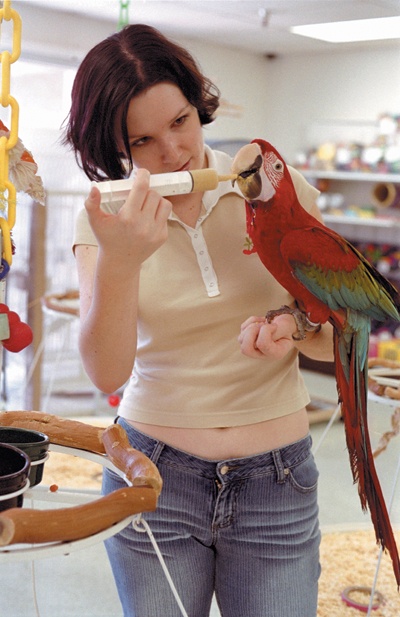 Like feeding a baby of her own, Wendy Johnson, a Citrus College zoology student, keeps to a macaw’s meticulous feeding schedule. / photo by Jenna Campbell

Earthy scents of carrots, wood shavings and walnuts tickle the nose while oddly shaped colorful toys catch the eye. “Hello!” cries a friendly, if loud, voice. But nobody is in sight.

Beyond a sign asking customers to “Please wash your hands,” another voice screeches, “Hi!”

The fact that the speaker repeats this six more times leads to the source: “Squirt,” a sassy and talkative derbyan parakeet. His friend across from him with the loud greeting is a bright green military macaw.

These and many other birds play, preen, fight, feast and screech from atop hanging pedestals that swing with every leap and flutter inside Omar’s Exotic Birds, which until recently was in La Verne.

“These birds love all the attention,” says Michelle Manassee, emerging from the flurry of feathers and beaks.

For the flocks of bird enthusiasts out there—and enthusiast is being restrained—these shops offer some of the most delicate, beautiful, expensive, needy, noisy, moody and lovable birds available in California.

And the staff know them all.

“The prices range just like the personalities,” Manassee says. “You have very small jumpy Lovebirds that will run under $100 to some of the bigger, more rare ones, like the personable Macaws that go for more than $2,000.”

Taking a beautiful Apricot Headed Caique for a mere $1,299, will get you “a kitten with feathers” according to employee Wendy Johnson. “He loves to bounce around and play with things on his perch, he seriously has the playful personality of a kitten,” Johnson smiles.

Elaborately colored blue and gold-wing macaws fit the stereotype of an exotic bird, and thrive on attention. While the $1,399 price tag may be sobering, these birds are hardly as serious. “He gets so giddy and playful when I hold him and people are around,” Johnson says as she goes in to nuzzle nose-to-beak. “You’re just silly, aren’t you?”

“Cockatiels are just all-around good birds,” she explains. “They are great starting-birds for people. They sing and whistle and are very pleasant to have around. Most importantly, they are easy take care of.”

Shop staff care enough for the birds that they will not sell them to just anyone. In fact, when buying one of these winged wonders, buyers should be prepared to answer a few questions of their own. More than helping customers find the right bird, the staff want to find the right owners for their birds. “If someone just walks in and says, ‘I want a bird,’ because it talks, then they are buying for the wrong reason,” Manassee says.

As store manager, Manassee is as atypical as the animals she works with. Working with animals both wild and domestic for the past 20 years at zoos and animal parks, she has made a name for herself in the animal kingdom. “I’ve trained everything from elephants to bats,” Manassee says. “I understand the connection between humans and animals very well.”

Despite her experiences with the wilder denizens of the jungle, Manassee’s heart flutters most for those comedians and characters of the canopy.

The Southern California native found her fondness for feathery friends in a pet parakeet she had as a child. “His name was Freddy,” she chuckles. “It’s kind of ironic, all he ever did was say ‘Kitty! Kitty!’”

Manassee claims that at one point in her life she had 11 birds, seven cats, four fish tanks, and two dogs. A partridge in a pear tree would have completed her menagerie.

“I love working with these birds,” she explains. “Working here is not about the money, it’s about the birds and their well being.”

Manassee feels that the environment has to be right for the bird to go home to before she sells it. “You don’t want someone who is really shy and has a small apartment to take home a bird that loves to talk and needs an incredible amount of space,” she says. “It won’t do either parties any good because they’ll just come back unhappy.”

“The staff here actually knows what they’re talking about,” says customer Robert Silvey 45, of San Bernardino of the shop that is now located in Placentia. “But more importantly, they care about you and your bird. It doesn’t just end when you walk out.”

Some shops, like Omar’s Exotic Birds, guarantee healthy birds and offers lifetime grooming for all customers. Or at least, their birds.

“We are incredibly careful with the breeding and care of the birds before they are sold,” Manassee says. “We offer the guarantee to show people we stand by our care.”

For Silvey and his wife Denise, the pets offered here are worth getting near. Owning a bird means one travels far and wide for services and supplies. “We live in San Bernardino, almost 45 minutes away, and we come out here for stuff for our birds,” Robert Silvey says. The couple found true love with two blue and gold macaws that brighten their lives with brilliant shades of yellow and blue plumage. They agree that many fail to understand the responsibilities of owning an exotic bird. After the demanding purchase price and costly maintenance, these birds require attentiveness greater than “Polly want a cracker?”

“They have an emotional capacity of a two-year-old.” Johnson says.

“Aside from the fact that the birds live for 100 years, they demand the attention that a toddler does,” Silvey agrees.

“I get it all the time, the big question, ‘Why?’” Manassee says. “After all is said and done, why?” Manassee says of these demanding creatures.

“Birds fill a niche that cats and dogs can’t,” she answers. “These birds grow up with you. It’s like owning this beautiful, free spirit.”

As the on-lookers in the store continue staring in awe at the perches and children are tempted to touch the colorful creatures, Denise Silvey makes a comment that brings a big smile to Manassee’s face.

“People just don’t understand how beautiful they are,” says Silvey, petting a beautiful Macaw perched on her hand. 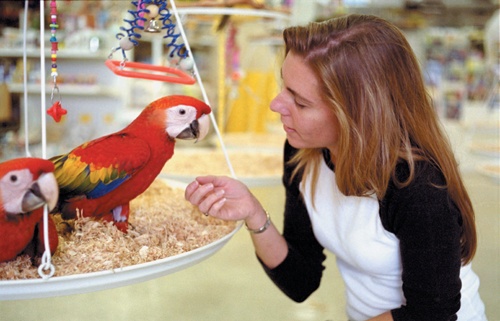 Showing affection, Michelle Manassee, manager of Omar’s Exotic Birds, has an unspoken bond with her birds. / photo by Jenna Campbell 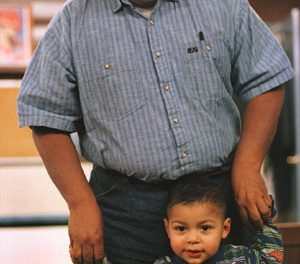 Thirty Days to Make It 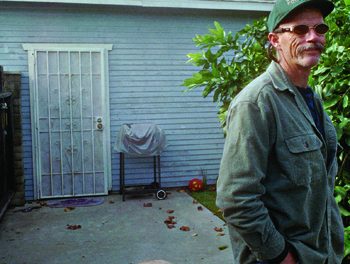