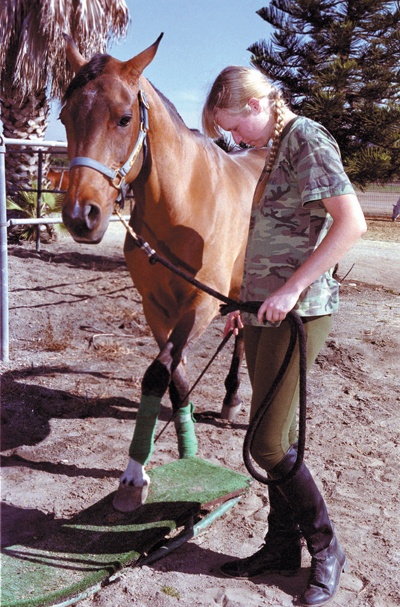 Training day has arrived for Nebular, as Naomi Nelson, Cal Poly, Pomona student, attempts to make him a live rocking horse for her senior project on balance. / photo by Jenna Campbell

In the late 1920s, silver screen legends and heartthrobs such as Gary Cooper and Clara Bow flocked to a stable to ride and take pictures with a small herd of elegant Arabian horses. Appearing in many films of the time, the beautiful beasts were stars themselves. Rudolph “The Great Lover” Valentino, mounted the famous Jadaan, a resplendent silver and gray stallion, and rode him in six motion pictures including “Son of the Sheik.” Letan, another Arabian, carried President Theodore Roosevelt and found Hollywood fame with beloved humorist Will Rogers in the film “Texas Steer.” The home of these famous horses was not at a Hollywood studio, rather Kellogg Ranch, located on what is now California State Polytechnic University, Pomona.

William Keith Kellogg, the great cereal mogul from Battle Creek, Mich., left behind a legacy other than the corn flakes for which he is remembered. He held a lifelong love for horses, especially Arabians, and established the ranch in 1925 to house them. When he deeded the land and ranch to the State of California for a new University, it was on the condition that the ranch and horses must be maintained in perpetuity. “It was in the original deed that for the campus to stay under the University, the horses had to be here,” says Jerry Liberatore, Kellogg Ranch Farm Manager and Equestrian Coach. “This land is pretty much sacred.”

Although the deed has since been renewed and changed, the tradition carries on the same. “There was a deed restriction that said in order for the state to maintain the property, they needed to keep the Arabian horse program going,” says Bill Hughes, director of the Arabian Horse Center and Equine Sciences. “It specified a given number of horses – a minimum of 75 horses.”

According to Hughes, since 1973 the University could rightfully abandon the ranch and its horses, but has chosen not to do so. “This is our heritage,” he says.

Arabian horses, a breed smaller than most, are considered very mild-mannered, intelligent and courageous. Since they have been in contact with humans for such a long time, they are people-friendly and more willing to train than most other breeds. Recognized for their strength and endurance, Arabians are ideal for show and labor, and a harmony of contrasts. “They have such a distinct personality,” Liberatore says. “They can be very energetic but also very docile. Their beauty is rugged but fine.”

Today at the Kellogg Ranch, descendants of Kellogg’s Arabian steeds still live. “That’s what Kellogg fell in love with— pure bred Arabians—he searched all over the world for them,” Liberatore says. “We’ve stayed true to Mr. Kellogg’s dream.”

According to legend, Kellogg owned a half-Arabian horse called “Old Spot” as a child and developed such an affinity for the breed that he vowed to own more. At 65, Kellogg began building his dream, a ranch in the Pomona Valley. In addition to the 400-acre ranch, Kellogg also developed a 25-acre hillside home. Much like the ranch, the Kellogg House, completed in 1927, has been restored and is fully functional today.

Kellogg purchased the first Arabian horses for the ranch from the nearby Los Angeles County Fairgrounds. To enrich his stock, he bred Arabians purchased locally from the Point Happy Ranch in Indio, Calif., with others from Lady Wentworth’s famous Crabbet stud park in England. The arrival of these English imports at the Pomona train depot on April 10, 1926, made headlines in area newspapers.

Because of his eagerness to share his love of the rare breed, Kellogg decided to publicly showcase his horses at regular Sunday shows. Held in the courtyard of the ranch, the free shows were popular with tourists visiting Southern California.

“The pioneers decided this was a good way to expose the horse to the public, and so that’s what they did,” Hughes says. “At that time, the industry was very small and his idea was to have a ranch where he could showcase the Arabian horse.”

Kellogg handed out postcards of the ranch at his shows, as well as free breakfast cereals to promote his other business. Merging the two passions into promotional synergy, he named horses after his popular cereals.

Sundays at Kellogg Ranch became so popular, that crowds in 1931 outgrew the courtyard and the show moved into a large arena. In 1932, the biggest crowd yet assembled for a special event. In addition to the usual show, 22,000 people witnessed Will Rogers ceremoniously present the ranch to California Governor James Rolph. On behalf of the State and the University of California, Rolph accepted the 750-acre ranch, 87 Arabians and a $600,000 endowment from Kellogg.

At the height of World War II, the ranch served as the Pomona Quartermaster Remount Depot under the War Department from 1943-1948. Because World War II was a mechanized war, mounted units were unnecessary, and the depot fell into disuse. Many horses were sold at auction, and in 1948, what still existed at the ranch was transferred to the US Department of Agriculture.

One year later the ranch and all the remaining horses went to the Kellogg Foundation, a charitable organization created by Kellogg in 1930. Several months later, on Nov. 1, 1949, the Foundation passed it to the State under the provision that they continue the breeding and training of the Arabians, as well as the Sunday horse shows. With the opening of the California State Polytechnic College Kellogg Unit, the university now commonly known as Cal Poly Pomona was born.

Since the days of Kellogg, the ranch serves to teach about equines, perpetuate the breeding of Arabians and make the bloodlines available to the public. As the University grew, so did programs offered in the crowded stables and soon a new facility was needed.

In 1974 the Arabian Horse Center opened on campus with room for 150 horses, and today includes 38 acres of pasture, three barns, a veterinary clinic, a farrier shop that shoes the horses, four arenas and covered grandstands for shows and exhibitions.

The breeding program Kellogg established in 1926 continues today and is one of the most prominent in the United States. Kellogg’s desire to share the breed he loved and provide public access to his purebreds created a legacy. Many Arabians in Northern America today can trace their lineage back to Kellogg’s herd. “It’s the oldest continuous Arabian breeding farm in the United States,” Liberatore says.

In the breeding area are foaling stalls where Cal Poly students can stay with the horses and assist with their delivery. The successful breeding program, which produces 15 to 20 foals each year, generates funds that go toward the programs offered there.

Just as they were in the Roaring ’20s, the Center still holds public shows every first Sunday of the month, October to June. After 77 years, it is the longest running show of its type in the area. Just as Kellogg intended, this Southern California tradition exhibits the versatility, beauty and intelligence of the Arabian horse to the public.

More than the shows, however, the Center is a living part of the campus. There is something about the equine program at the Arabian Horse Center that keeps faculty and students around and involved.

Liberatore has been working at the center for eight years. As farm manager he is in charge of maintenance, breeding, foaling, student labor and assisting in classes. What he loves most is coaching the equestrian team – he says it keeps him in the program. “What keeps me going everyday is traveling with them and all the camaraderie,” he says with a smile. “It’s always an upbeat atmosphere.”

The center hires limited staff to handle maintenance, herding, breaking and training of horses. Student workers do the rest. “We get students involved in every aspect,” Liberatore says.

You do not have to be in the equine program to be involved with the horses. “We have a whole gamut of people who love horses and want more experience,” Liberatore says. “It’s a stress reliever.”

Students can try out and be assigned a horse to ride and take care of, allowing them the opportunity to learn horse handling and also ride for fun. “It doesn’t matter what your major is, it matters what your passion is,” says Angela Leontas, 19, a senior math major.

Leontas had never ridden a horse before she came to Cal Poly. But she had a long-standing interest and desire to own one. She has now been riding in the program for two and a half years, and often announces at the Sunday shows. Angela says her favorite part of the equine program at Cal Poly is taking care of the horses.

“They have such wonderful personalities it’s unbelievable,” she says. “They’re your best friends and the best listeners. You get to know a horse very well. It’s always a wonderful beginning or end to your day,” she says. Like many Cal Poly students, Angela is grateful for the opportunities the center provides, proving the Kellogg spirit really does live on in the hearts of those which his legacy has touched.

“It gives us all the opportunity to love horses as much as he did,” Angela says. “His thoughtfulness has touched a lot of people very deeply and I’m one of those.” 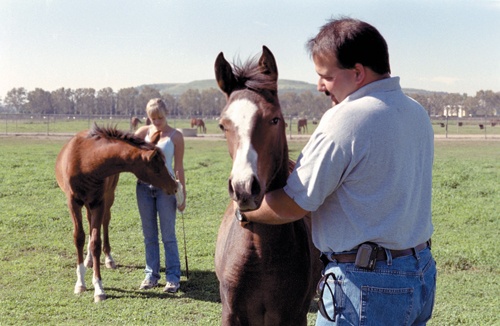 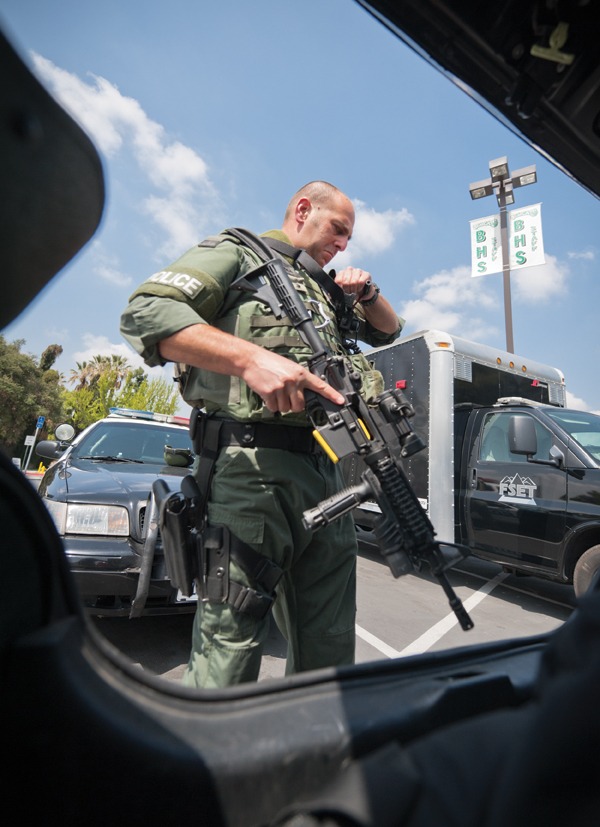 Local SWAT trained to save 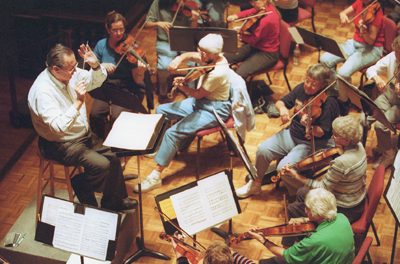 Living a Life of Music 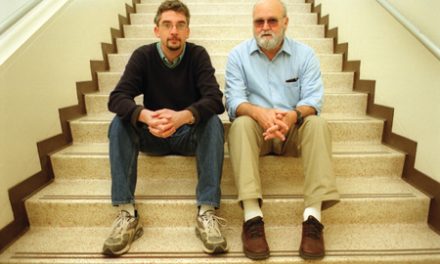 The Shaky Truth About La Verne 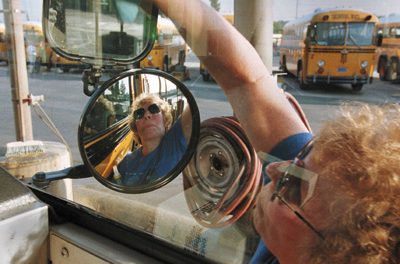 $56 Million and Not a Cent to Spare