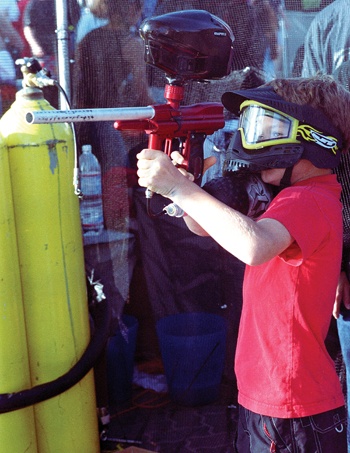 His body trembling from the recoil every time his little finger pulls the trigger, 9-year old Connor Johnson shoots a paintball marker for the first time at a paintball expo at the Huntington Beach pier. / photo by Adam Omernik

I am sweating. The goggles on my face mask are foggy. I can’t see a thing. The morning sun hardly falls into the barracks, that I chose as a cover from the war that is going on outside.

Why is it so silent? Where are my friends? How many of them are left? Am I alone? Carefully, I poke my head out of the window. I am in Vietnam, in a Vietcong Village.

Zoom! Splash! Like fat insects on speed, fallen into a bucket of paint, a salve of balls fly inches past my eyes and detonate at the wall next to my head. I jump back into my shelter, with my back against the thin wall. Why did I decide to do this? This seems all too real.

The words of paintball expert Xavier Lopez from the Mountain View Paintball shop echo through my mind. “It is a great way to relieve stress. If you’re an adrenaline junky, you gotta try paintball.”

But being hunted through a country-themed course, facing enemies with a gun of air and paint and crawling through the mud, always seeking cover—is this really the definition of fun?

A war-like scene where everybody walks away? It is.

Minutes later, after two masked men came running into the house, shooting, covering me in paint and taking me out of the game, I am still convinced of the fun of paintball.

The overwhelming rushes of adrenaline and excitement make me want to play another game— in about 15 minutes.

“It is aggressive, it is fast, it gets you to pump adrenaline; I love it,” says player Kevin De Angelo. “You can get an adrenaline rush without serious danger,” Lopez adds. “Even though you’re shooting with guns, it is safer than a lot of other extreme sports.”

Paintball is a trendy combination of shooting abilities, which requires speed and agility. It is played on special fields and at big events like the Pure Sport Promotion L.A. tournament at the Fairplex in Pomona. It is becoming a sport for men and women of all ages. “You might fight side-by-side with a lawyer, a teacher and a student on the field,” Lopez says. “I talked to players from 10 up to 65 years. Men, women, children. You don’t even have to be fit. Everybody plays the game.”

The game has a professional and a recreational side.

Rec-ball is the first step for new players to get in touch with Paintball. Lopez advises those just to go to a field, rent the equipment and start playing. Essential for the game are baggy old clothes, which absorb the impact of the paintball, and which can get covered with mud and paint. “Most people just go out and play paintball for fun,” Lopez explains. “There are special fields for this so called rec-ball with mini cities, castles, woods and many more props.”

Lopez advises against playing in the mountains “because, it is illegal to use a marker anywhere else than on a paintball field. Your markers are not set to a speed under 280 feet a second and you have a lower safety level. And playing on a field is just more fun because it is set up especially for the game, and you have referees who watch the action, which avoids disputes if players are out or not,” he says.

Before a game, the players are categorized from beginner to advanced, according to their paintball experience, and then they are put into two skill-balanced teams. After the safety instructions, the markers’ speed is checked, and the game can begin.

Playing for the first time, the Paintball experience can be very short. Once hit by a paintball, which explodes on players clothes and covers them with bright paint, a player is considered “marked” and has to leave the field. “Confused paintball greenhorns are an easy target for experienced players,” de Angelo says. “The best advice is not to run around the field like Rambo and try to shoot everything that moves, but to seek cover, shoot in short salves and then go back.”

But even the beginners experience the spirit of the game from the moment they enter—the tension on the field with long periods of silence, the hastily yelled commands, and the adrenaline rush at the sudden outbreak of action and shootings—all pull every greenhorn directly into the paintball fever. For this adrenaline, the players accept the dirt and paint on their faces and clothes, and the hole in their wallets from buying the equipment.

University of La Verne Journalism Professor Dr. George Keeler remembers the roots of the game. “When we played in the early ‘80s, we did not play with high-tech paint guns, but with cow markers,” he recalls. “You had a single shot gun, it really hurt, and the acrylic paint could not be washed out of our expensive camouflage outfits. It was a serious game, not the kind of family fun it has evolved to today.” Nowadays, paintball has taken its place as one Americas most favorite recreational activities, right up there with softball and bowling.

Starting up in paintball, one needs a marker—the paintball gun, a CO2 tank, a facemask and a holder. The prices for this beginner package start at about $ 200. With the beginner package, local shops also offer three free games at the three Corona fields.

The most expensive guns cost $ 1,400. “For this price, you get the best rate of fire, accuracy, consistency and craftsmanship,” Lopez explained.

It is the closest thing to a machine gun, delivering paint instead of pain. What you get for this price is to be the top gun on the field—every time and in more than one way.

But that gear is more for the paintball professionals, who see paintball more as a sport than as a hobby—those who travel around the country and play on open fields with inflatable obstacles.

They do not even call it paintball; for them it is speedball, and it is more than just going out there and eliminating players. “It is a combination of tag, shooting and chess,” Lopez says.

With two different major paintball associations, the National Pro League and Pure Sports Promotion, come two main leagues: the Super -7 and X-Ball and many different paintball formats. These formats differ in number of players per team, from five to 10, but the main rules are similar. Points are gained for taking out players and capturing a flag.

To reach those goals, the teams develop strategies, splitting up their players into three categories–—back, middle and front players, much like on a soccer field. “The back and the middle players back up their teammates, look over the field and control the communication, which happens by yelling commands,” Lopez explains. “The front players are the fast ones. They try to take strategic important places at the middle line bunkers. If they are eliminated, their spots are filled up with middle players.”

The fact that the recreation has become a sport can also be seen in the media coverage. Besides a wide variety of paintball magazines, Fox Sports owns the rights for the NPPL Super-7 Speedball league, and media mogul Dick Clark bought the rights to broadcast X-Ball.

“Paintball is emerging and about to explode on the mainstream,” Lopez says. “Some of the professional players from teams like the Philadelphia Americans even get houses paid for from sponsors. We are not at a point where you can make a living off paintball yet, but I don’t give it more than five years until that happens.”

Lopez thinks that in no time, the community of La Verne will grow into a major Paintball city. “A lot of kids come to the store with their parents, buy the beginner’s set and even ask about forming teams,” he says. “Right after high school ends, they rush up D Street and flood into the store. And when those kids grow up with the sport, maybe one day we will have a professional team here in La Verne.” 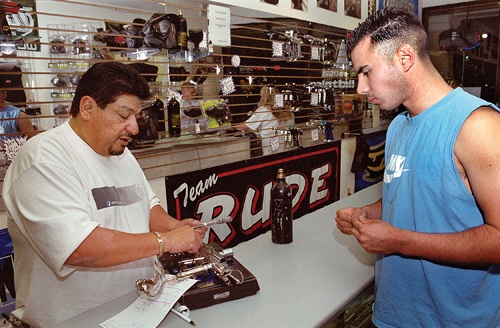 A scene like something from “The Sopranos” flashes through Edgar Nicolao’s mind as his weapon of choice, the paintball marker, is upgraded for more accuracy and more kills at Michael Estambia’s paintball shop on Foothill Boulevard. / photo by Adam Omernik 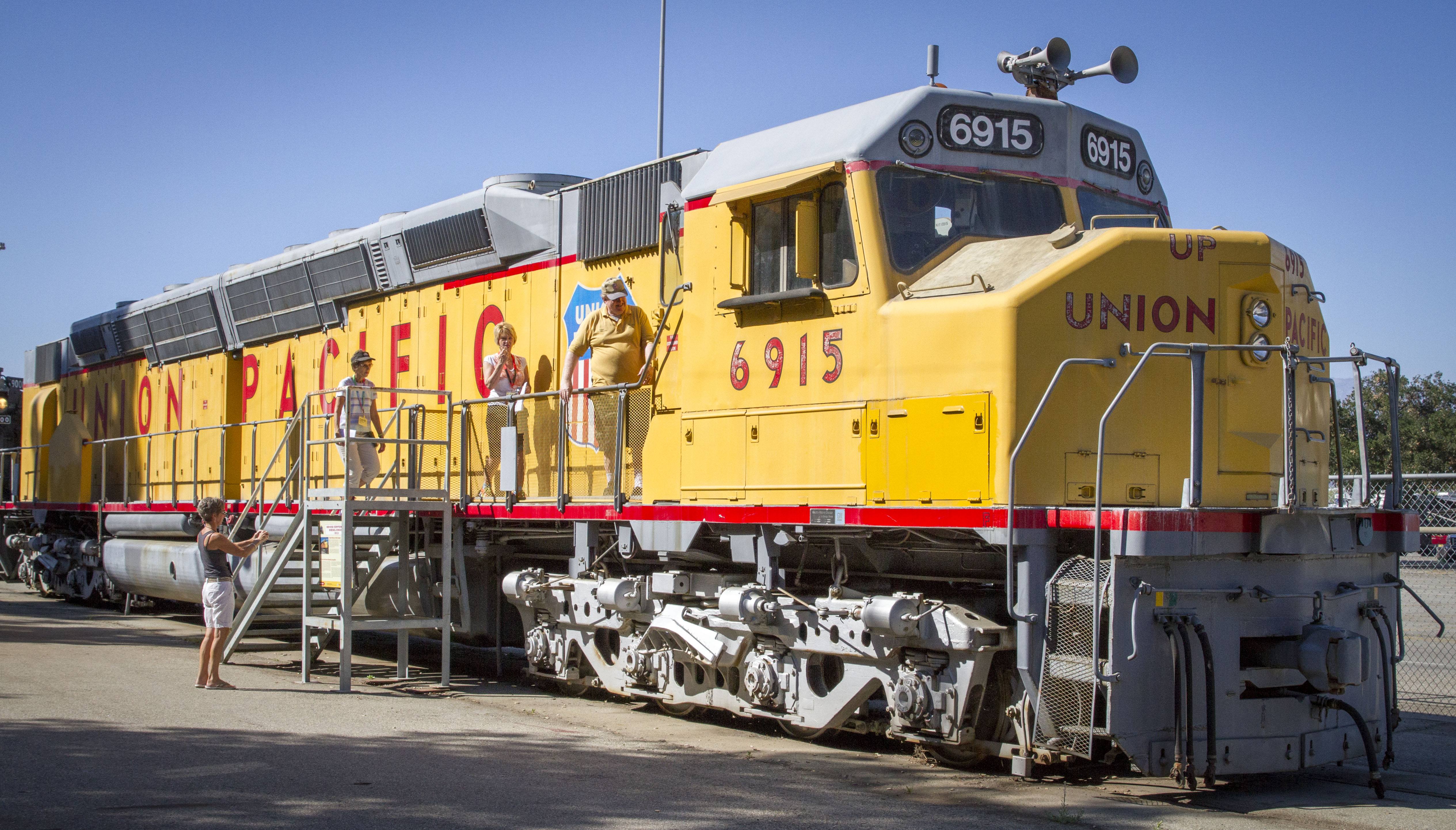 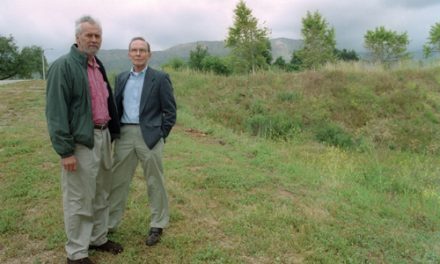 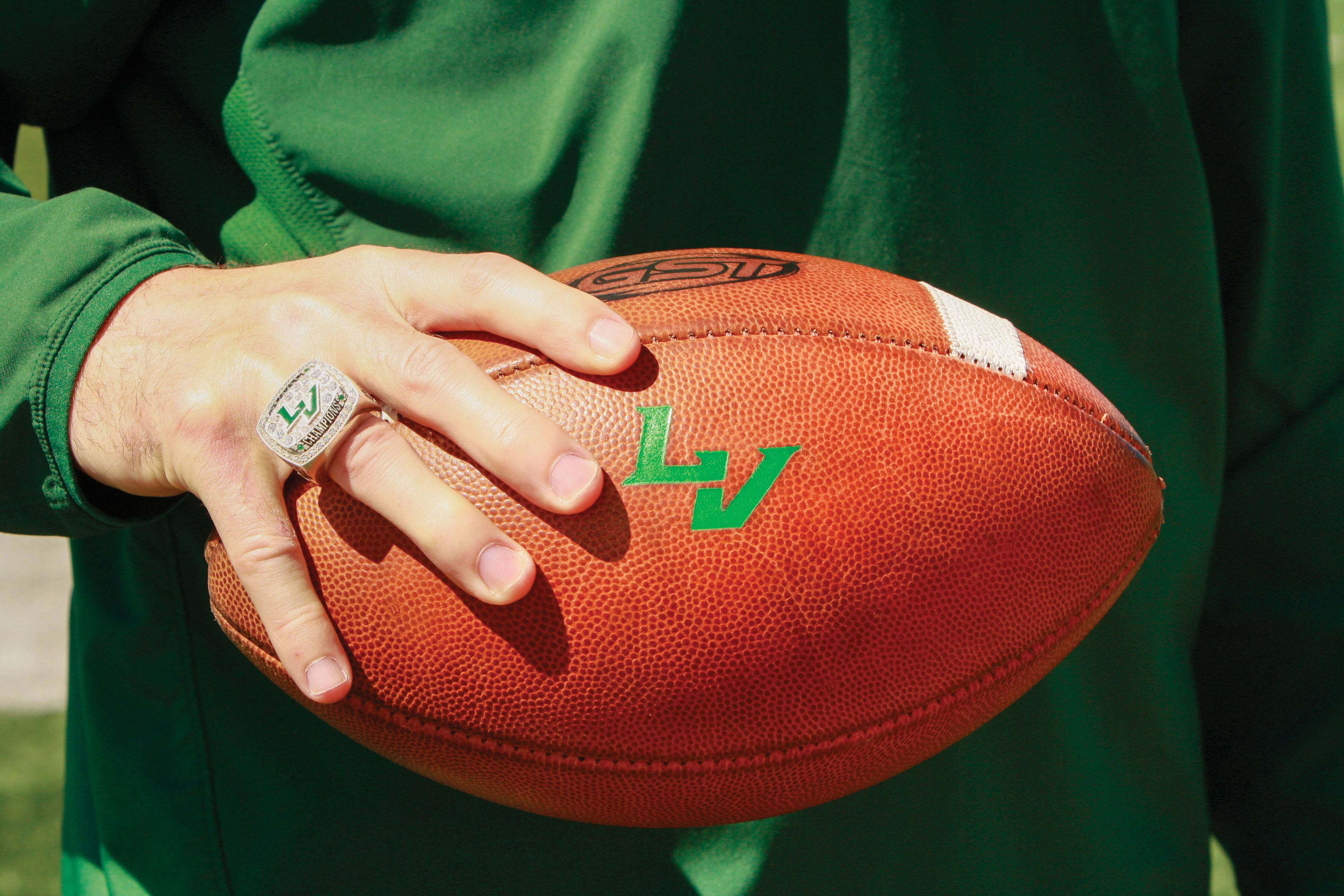