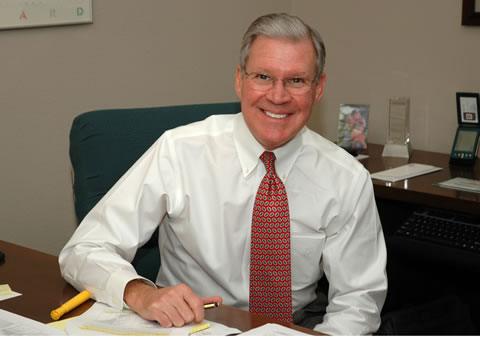 A smile is one thing University of La Verne President Steve Morgan does not need to schedule into his hectic life. It comes naturally. The tireless and enthusiastic worker holds the longest presidential tenure in the university’s history, at 22 years. / photo by Emmah Obradovich

Some see him as the embodiment of the University of La Verne, while others simply think he was born in a suit. Whatever the perception, Steve Morgan is the man who has shaped and molded the university for the past 22 years. Yelena Ovcharenko peers inside Steve Morgan, revealing his deepest thoughts about his presidency, ULV, George W. Bush and Iraq, and finding answers to questions posed by students.

When you were growing up, did you ever imagine that you would be president of a university?
No.

What was the decisive point or motivator?
When I was an undergraduate here at La Verne, I decided that I would really like to go into public management and be a city manager or do administrative work in government. Then, La Verne’s president, Leland Newcomer, said to me, “Why don’t you go into educational administration? You’d find it a lot more interesting.” So, after talking with him about that, I actually changed my major in my master’s degree from public administration to educational administration. That’s probably what got me started on the path that led to this position.

What do you feel is your greatest accomplishment during your tenure as president of the University of La Verne?
I think our greatest achievements in the time that I’ve been at La Verne have been when, as a community, we were in agreement with our vision and we moved toward that vision to make La Verne a better, stronger institution.

What’s your vision for the university? Where do you see it in 20 years?
I would like for La Verne to always support the values that have been important to it: the small, personalized environment where students are seen as individuals, not as numbers. The values of service to community and profession are important. We have a very diverse student body in a variety of ways—culturally, socially, politically—and I’d like to see us continue to embrace that diversity and welcome people from all different backgrounds. I’d like for La Verne to just get better at what it does well. So, 20 years from now, I wouldn’t see a dramatically different La Verne, but a stronger and better La Verne.

How do you keep yourself organized? About 10 years ago there was an article in La Verne Magazine that focused on you keeping an index card in your front pocket.
This one? This tells me what I’m supposed to do today. And before I leave the office at night I look at my calendar for the next day and I write out the next day’s schedule on a 3×5 card. That way I know what time I need to get up in the morning, where I need to go first, and what I have to do for the day. 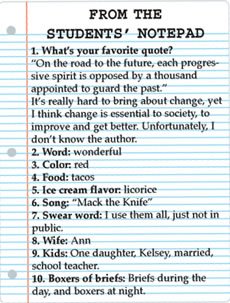 How long have you put a card in your pocket?
Oh, I’ve used that all the time I’ve been here. I picked this up when I worked at USC. We worked for a man who made us carry 3×5 cards in our pockets in case he told us something we ought to write down. Well, then I started putting my calendar on one of those cards so I’d remember where to go.

Who is your role model, and why?
I’ve had several mentors over the years. Professionally, one was Leland Newcomer, the man who was president here when I was just new on the staff. He was a great visionary. One of the most visionary people I’ve known.

Another mentor for me was a previous president who was president while I was a student here, and that was Harold Fasnacht. I learned a lot from him. Just watching him, as a student, I used to marvel at his ability to speak and keep everything balanced, and keep the university moving forward.

And then, the third person whom I really remember and stay in contact with still was my seventh grade teacher, named Ray Cortines. He’s done some really fabulous things in his career. He’s now working for Los Angeles Mayor Anthony Villaraigosa and trying to bring the school district into the mayor’s office in Los Angeles. Ray taught me a lot about being direct and honest and reliable and having integrity.

Did you ever consider running for public office?
When I was younger, particularly in grade school, junior high and high school, I thought I’d like to be a politician. I think I chose a better path.

If you had the opportunity to switch with President George W. Bush, would you have gone to the war?
Is that a trick question? I grew up in the Church of the Brethren, so I have a background that has emphasized peaceful resolution to conflict, and so I would want to ask first if there is a way to resolve a conflict that would not involve war. On the other hand, I would say I’m not convinced there aren’t times when we’re forced into war. Would I have gone to Iraq? I don’t know. I didn’t have to make that decision. And I’m glad I didn’t.

If you could have another job, what would it be?
I have really gotten a great deal of satisfaction out of this job. And I felt it a real privilege to be a part of this community. I have a real passion for education and particularly for the kinds of students we serve at La Verne. We have such a wonderful cross-section, and I can’t think of any more important work than providing education, because the problems of the future—the cure for cancer, peaceful resolution to conflict—will come from educated people. If we can provide you with an education and prepare you to pursue your dreams, whatever they are, that’s pretty satisfying work. So, I don’t think about what else I might do. 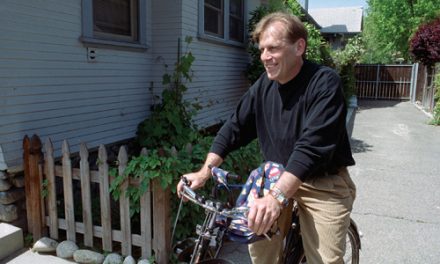 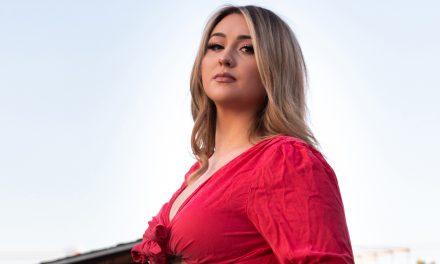 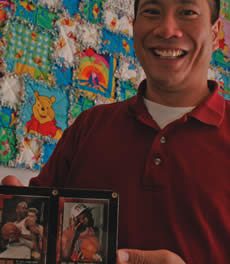