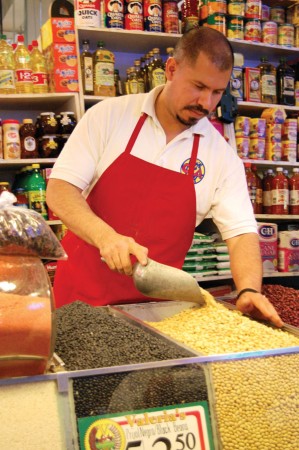 Specializing in their spices, Valeria’s is located in the Grand Central Market, north of Hill Street in Los Angeles. Rubin Xlepez and his brothers work together to keep their customers happy and their family business running. / photo by Jaclyn Dino

Living in Southern California presents a double-edged sword. On one hand, this is a region comprised of unimaginable culture and opportunities. At the same time, we are inhibited or otherwise unwilling to put forth the effort to commute to experience these offerings. While downtown Los Angeles is a mere 40 miles from La Verne, the trek to experience it turns many adventurers away. They cite congested freeways, high gas prices and the confusion of driving in an unknown downtown area.

But what if there was a simpler way to orchestrate a venture downtown? A specific pathway to a particular destination? Well, here’s a suggestion: take an adventure to downtown’s Grand Central Market.

The Grand Central Market appeals to anyone who appreciates history, diverse foods and environments and a little adventure. It is located in downtown Los Angeles, from Broadway to Hill Street, between 3rd and 4th streets.

Getting there is not nearly as difficult as one would imagine. In fact, one might say that getting there is an option that induces relaxation and sightseeing. All that the journey entails is a simple ride on the Metrolink. The North Pomona stop is located on White Street, where tickets can be purchased for $13.50 round-trip ($10.25 on the weekends). Trains go westbound every hour or so, and a schedule is available on their Web site.

After boarding the train, the first thing one may notice is how clean and quiet it is aboard. The cabins are usually full of commuting professionals toting laptops and cappuccinos—quite a different image of public transportation than one might originally picture.

The train ride itself is a relaxing 50 minutes to Los Angeles’ Union Station, the major port for all subways, Amtrak and Metrolink trains. The Metrolink propels you past congested traffic, revealing select areas with breathtaking views of mountains. The comfortable seats, virtually noiseless movement and the smooth ride may even induce sleepiness. But do not worry, Union Station is the final destination, so even if a nap does take you by surprise, a conductor will wake you at the final stop.

Union Station is less than a mile from the Grand Central Market, so those so inclined may walk to Broadway Street. But for everyone else who feels a bit wary about wandering downtown streets just yet, there is another option: the Metro.

Purchasing a Metrolink ticket grants riders free connections to their destinations. They are eligible for a ride on a bus or the Metro light rail, which is located in Union Station as well. The Metro red or purple lines are the ones that travel closer to the Grand Central Market. Both lines begin at Union Station, so all you need to do is follow signs to the red and purple lines (both are located in the same terminal), and enter one. 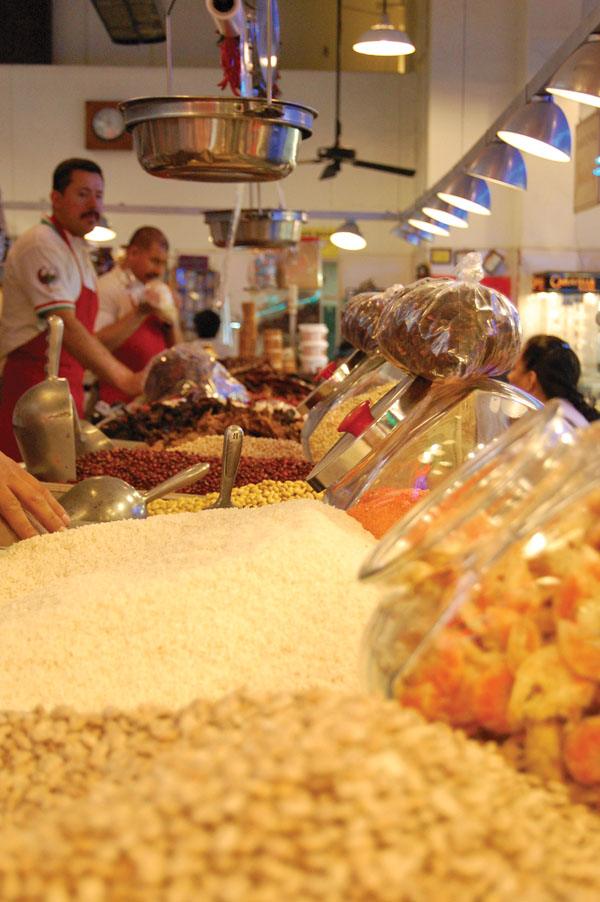 Two stops later is Pershing Square, the closest stop to the Grand Central Market. Upon exiting the Metro, amid the skyscrapers and open park area, you’ll find yourself at the heart of downtown. If you choose this adventure between the months of November and early January, you will find that Pershing Square is converted to an outside ice skating rink for the holidays.

Hill Street is a block east, and then the market is a block north. The entrance, signified by the large black sign with “Grand Central Market” painted in bold white lettering, is hard to miss, though one wouldn’t imagine such a scene from the inconspicuous corner building.

Though this venture has undoubtedly seemed like a true experience already, the heart of the adventure lies within this historic building.

The open-air market has been in operation since 1917. Amid the plethora of neon signs are the old columns and hanging fans that appear to have been lifted from a 1920s market scene.

Sawdust covers concrete floors that lead down narrow walkways between a multitude of restaurants, juice stands, dried goods and vegetables. Every now and then a pigeon or two makes it into the shopping area, which would be considered unsanitary in most establishments, but for some reason adds to the ambiance of the market.

After passing the initial juice and coffee stands, the next sight is an elaborate display of fruits and vegetables. In addition to the expected strawberries and bananas, there are numerous exotic fruits offered that probably won’t be present at the local chain grocery store.

Just beyond the impressive fruit and vegetable collection is an elaborate array of perfumes, groceries, pharmacies, jewelry, alcohol and other items that one wouldn’t expect to find at a market. And if you feel overwhelmed by the sights and sounds of the diverse marketplace, massages are offered every half hour.

While many of the restaurants offer delicious pastries and plates, be sure to save room for Sartia’s Pupuseria, an El Salvadoran food stand which has been voted “best meal under $5.” Their signature dish, the pupusas, resembles a calzone filled with cheese, beans, meat and an assortment of salsas to choose from. The plate will be completely full, as will your wallet, as this tasty dish only costs $2.40.

If Salvadoran food isn’t what you fancy, try Tumbras a Tumos, an authentic Mexican stand. The popular stand always has a crowd around it, but not to worry, soon you will be enjoying your selection of two delicious soft tacos.

The market offers two separate seating areas, one at the entrance and another in the middle of the hustle and bustle. While eating your selection of delicious food, don’t be surprised if you see a suit-clad downtown businessman sitting next to a Mexican farmer sporting spurs and a cowboy hat.

Journey through the rest of the market and find a diverse offering of Mexican cheeses, Hawaiian barbecue, fresh seafood and meat. All of the stands offer amazing prices, which is impressive after noting they all proudly display “A” health ratings.

If you’ve passed through the entire market selection and still don’t feel impressed by the culture shift, step through the back entrance of the market. Once you’re on downtown’s Broadway Avenue, another world of culture and diversity unfolds. Stores on Broadway resemble that of another country, with their open doors and blaring ethnic music. Numerous gorgeous theaters have been converted to shoe stores and the like, which brings a historic link to the new world of consumerism. Many signs are in Spanish, so it truly feels as if you’ve left California.

After you’ve seen all the culture you can handle for a day, retreat back to the Metro Gold line in Pershing Square and head two stops to Union Station. From here, make the transition back to the Metrolink track and begin the trek back home. While embarking on the soothing 50-minute train ride, put your feet up and process all that you’ve seen. After all, Southern California is indeed a cultural town that is accessible, and costs less than $20 to make an adventure out of it. 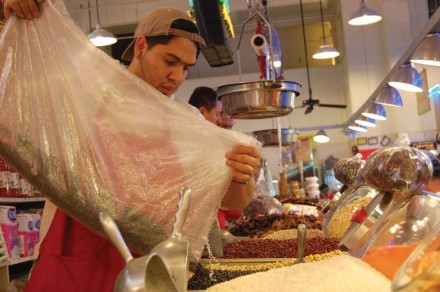 Valeria’s in the Grand Central Market has a wide range of products, including nuts, dried fish, corn, beans, peas and more. Ancho Xlepez and his brothers work together to keep their customers happy and their family business running. / photo by Jaclyn Dino 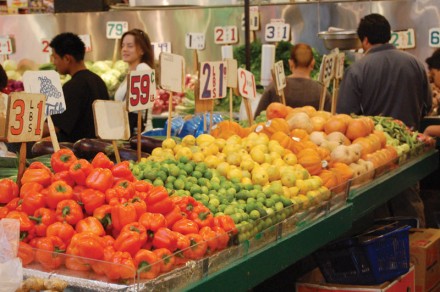 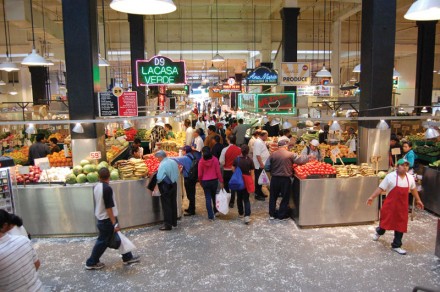 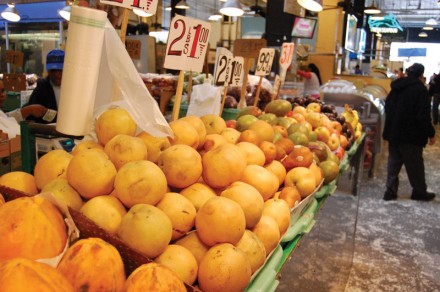 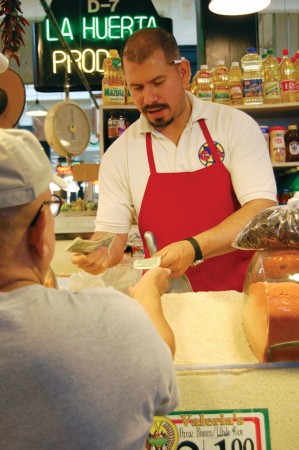 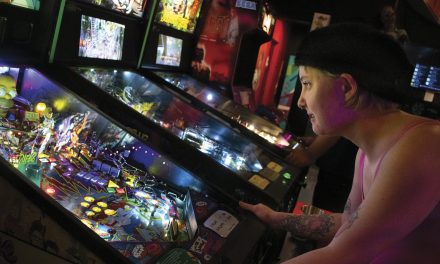 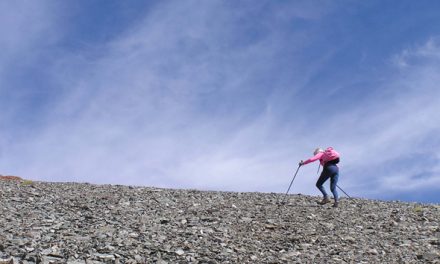 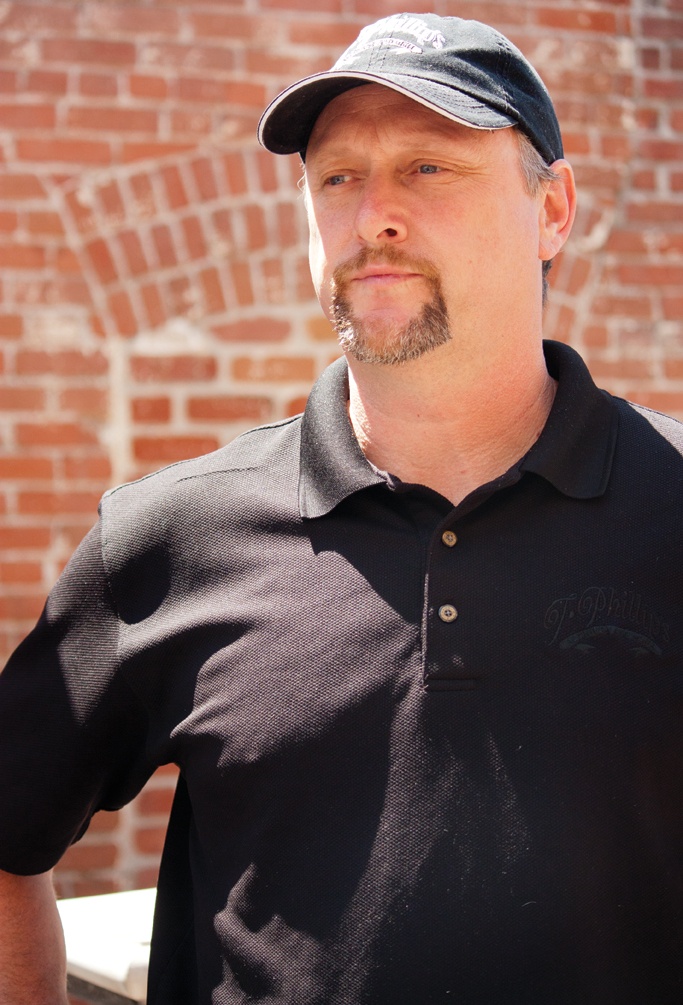 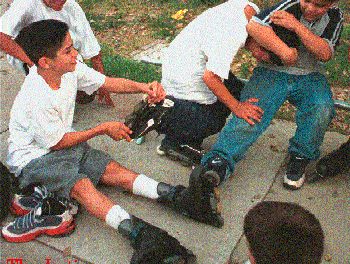