Professor Jerome Garcia’s teaching tools are always out on display, not only for a day’s discussion but also as a constant reminder to his students that they are there to learn about the body’s many processes. / photo by Michael D. Martinez

Accountability was not always on Jerome Garcia’s mind. Speaking now as associate professor of biology at the University of La Verne, Jerome says that as a first generation student—the first in his family to ever attend college—it was not easy to have the perseverance and the strength to get through the University of La Verne. Jerome says faculty now remember him as being a great La Verne student. He says this is because they recall the end result rather than the beginning. But he remembers being a wily student. Actually, he uses stronger words than that, starting by saying he barely passed his required writing courses freshman year. He recalls taking them for credit rather than for a letter grade so his true grade, a low “C,” would not show on his transcript.

Sitting on a classroom chair in the ULV chemistry lab, dressed in khaki pants, a white dress shirt and an emerald green tie with the name “University of La Verne” printed at tie bottom, the newly named chair of the biology department recalls with a sense of humor and humbleness being a first generation student at La Verne. Now he is giving the lectures. And he has hard won advice for those who follow as first generation students.

Jerome was the first in his family to attend a four-year college although his two older brothers first attended a community college. In a University-wide convocation speech Sept. 2, 2009, he made it known that his father had only $500 and many dreams when he immigrated to the United States. One wish was for his children to attend college.

As a La Verne student, Jerome says he had many friends. But it was in college where he started to compare himself. He recalls that most of his friends had bank accounts and were able to go out and eat. He could not engage in this or other small luxuries. “My unedited thoughts went something like, ‘My classmates are more prepared and smarter than I am. I have never seen so many white people. They all have brand new cars. College is too hard. I want to go home.’ But I never had to ask for help that semester because my professors gave it to me whether I wanted it or not.”

Being a first generation student was confusing. “I had no idea about the obstacles of applying for college,” Jerome says. “I wasn’t prepared academically or financially.” Although Jerome did work study, he only saw one check—the rest went directly to the accounting office to pay his tuition. And even his last work study check directly paid his graduation fees. Jerome says he wanted to go out with his friends, but he did not have the money. Instead, he would be in his dorm room studying. “It taught me sacrifice.”

Jerome says high school does not involve too much thinking for yourself. There, he did not develop his critical thinking skills. Instead, high school went along the lines of, “If I ask you this, you say this.” Jerome found that in college there are more questions than answers. It’s about finding your voice rather than being told what to say on a test or essay to get an ‘A.’” Although Jerome barely passed his La Verne writing classes, he earned “A’s” and “B’s” in all his science classes. “It’s all relative. I worked my butt off for those ‘B’s,’ and my friends didn’t even lift a finger, and they got an ‘A.’” According to Jerome, what was review for his friends was new for him. In his convocation speech, he singled out his former natural science professors—now his colleagues—and thanked them their dedication. He says he would not have persevered if his professors did not take the time outside of class to explain concepts to him and push him to continue with his academics.

There was a time when Jerome felt like giving up. “After my second semester, I almost dropped out. That was real. Being homesick, the transition and being different contributed to it.” He says his 200 level science classes were twice as hard, and he was being tested on much more complicated concepts. He cites how Biology 202 was one of his hardest classes at the time. Since he was being tested on unfamiliar information, he was tempted to cheat. He says he did and was caught by Jay Jones, professor of biology and biochemistry. Jerome admitted to the misstep and took complete responsibility. Instead of immediately giving Jerome an “F,” the professor gave him a talk on life, integrity and honor. After, Jerome says he felt ashamed. It was at this moment where Jerome not only learned about natural science; he learned about being a respected human and about living an ethical life in general.

Remembering the moment, Jay says most professors and universities may ignore a situation like this; they may expel the student. However, Jay says this flaw of dishonesty needed to be corrected. “If you really care about the students, you want to give them guidance to move past that and understand the importance of integrity and to adopt a strong sense of values.” Speaking in the present about his now colleague, Jay says, “I think he’s a wonderful asset to the natural science department.”

Jerome’s stubborn character made him stick to finishing college. “I’m stubborn and hate to lose. I took the mentality that I wasn’t going to get beat,” Jerome says. “That’s bad because they were bad reasons to stay. I stayed in for the bad reasons.”

“I was a first generation student as well, so I sympathize with those challenges first generation students face,” Jay reveals. He says Jerome was a receptive and interested young individual who had potential; he just needed some guidance. “He matured through his undergraduate curriculum. It is clear we accomplished our goal with Jerome.”

Originally, Jerome wanted to be a medical doctor. “What they show on TV and reality are two different things,” Jerome says. “It was kind of about being naive and ignorant.” The key thing that drove him away from becoming an M.D. was the lifestyle. He wanted a life where he could spend time with his family. “This particular career would have not been conducive to the lifestyle I wanted.”

During college, he became a teacher’s assistant and private tutor. While being paid most of the time, there were times when he would do it for free. “I enjoyed it,” Jerome smiles. He recommends that students find their passion and make it a career or do something that they do not mind doing for free.

At the beginning, Jerome found he had the mentality of figuring out a means to get to the end. He initially wanted a Ph.D. so he could teach college students, but it was not until the middle of his Ph.D. studies at the University of Southern California that he realized his real reasons for obtaining a Ph.D.— to help the total person through his passion for natural science. 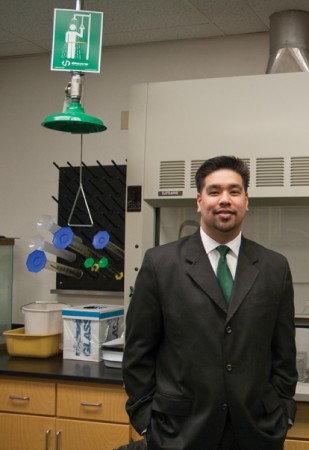 Back in the University of La Verne science lab he knew first as a student, Jerome Garcia, ULV biology department chair, says he graduated from La Verne not only as a well-prepared scientist, but also as a confident person—one who learned much about himself. / photo by Michael D. Martinez

While an undergraduate, he relied on his professors for his academic support even though his parents always tried to help him as best they could. “I had no one to ask or talk to. Obviously, I had my professors, but [sometimes] I didn’t know what to say.” But when his questions came, he could always find the answers from his professors.

Now, he is the one lending that support to high school and college students. He visits school districts in areas such as Rialto and Pomona to offer academic advice. He talks to anyone who needs guidance in choosing the right degree or major. “I try to be a confidant for the students,” Jerome says. “Whoever wants to talk – it’s an open door policy.”

Looking back, Jerome says attending college was ingrained by the parental advice, “If you want to succeed, you have to get an education,” but, nevertheless, his parents had no idea about the stresses of biology. They wanted to help him but did not know how. Jerome says he got lucky picking La Verne and choosing science as his major. “I chose it on gut feeling. The original reason for choosing these things was based on feeling. Now, I rationalize it. I was lucky to be in a situation where my family was supportive. I know a lot of first generation students where their parents weren’t supportive.” He says he thinks his parents are proud of him. “My parents are very reserved, not too expressive.”

Jerome says while in college one is not a child or an adult. “You get the best of both worlds. There are a lot of situations where you can be selfish. Students are able to experiment and to find themselves.” Jerome believes La Verne is good at getting the best out of its students, enabling them to succeed. “It helps them build on their weaknesses to make them better and to polish their strengths.” The strength of his words now tell the story of his accountability.

Success in college starts off with choosing a university that not only enhances your strengths but also has the capability of rectifying your weaknesses. That is what I received at the University of La Verne’s Natural Science Division.

Next, triple your effort in your first semester courses. Most students think they can give the same effort that they did in high school, and often they do poorly in their first semester. Tripling your efforts will provide a solid grade point average to build from. I never realized, until later, how many doors were opened to me based on my GPA.

Finally, get involved in social events. Many students focus so much on their major/career that they forget that college is also a time to test what you believe in, and who you are. Yes, I left La Verne as a well prepared scientist, but I also left as a young man confident in my beliefs and who I was as a person. 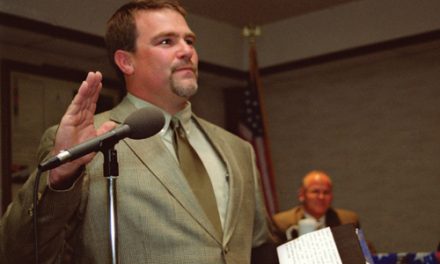 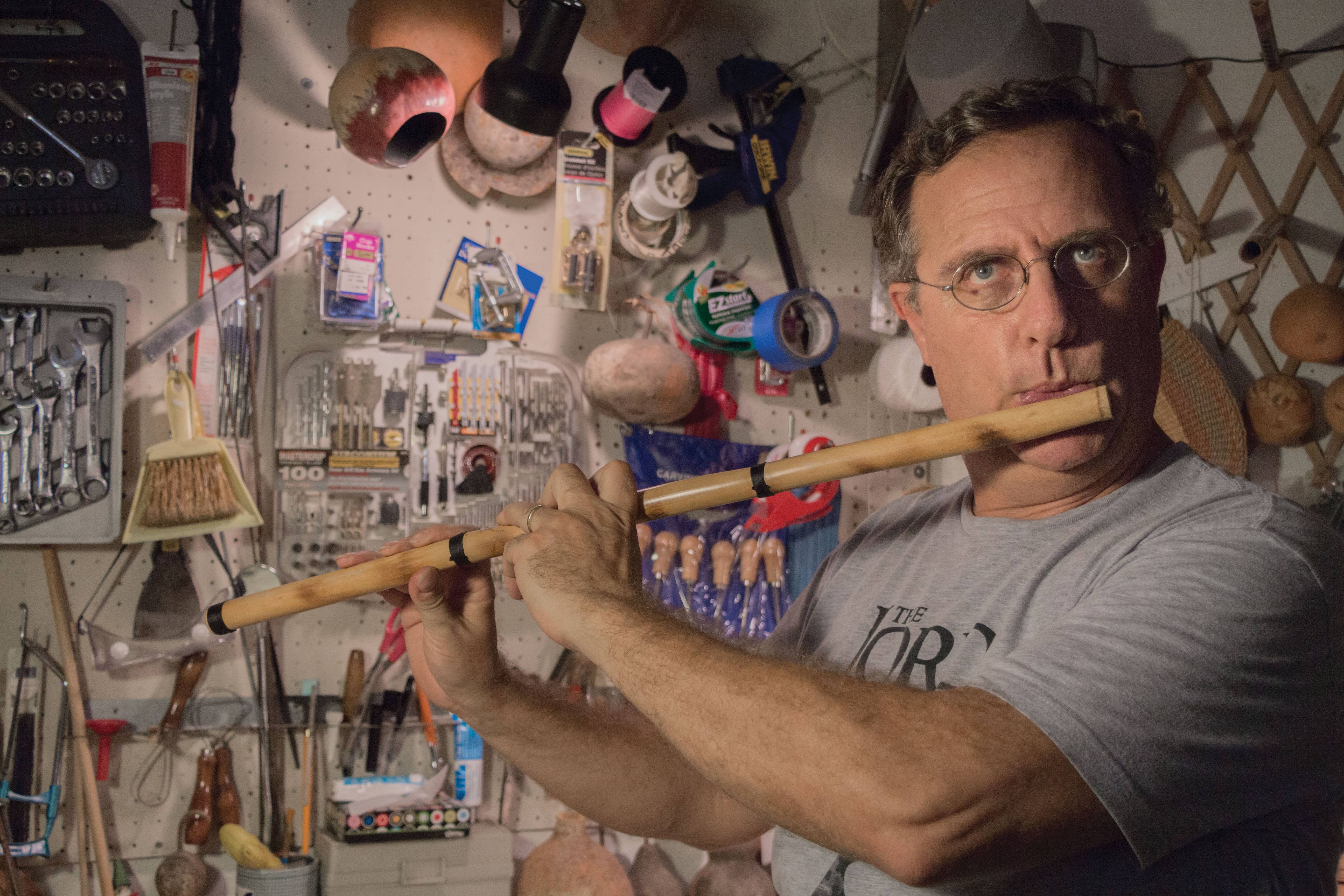 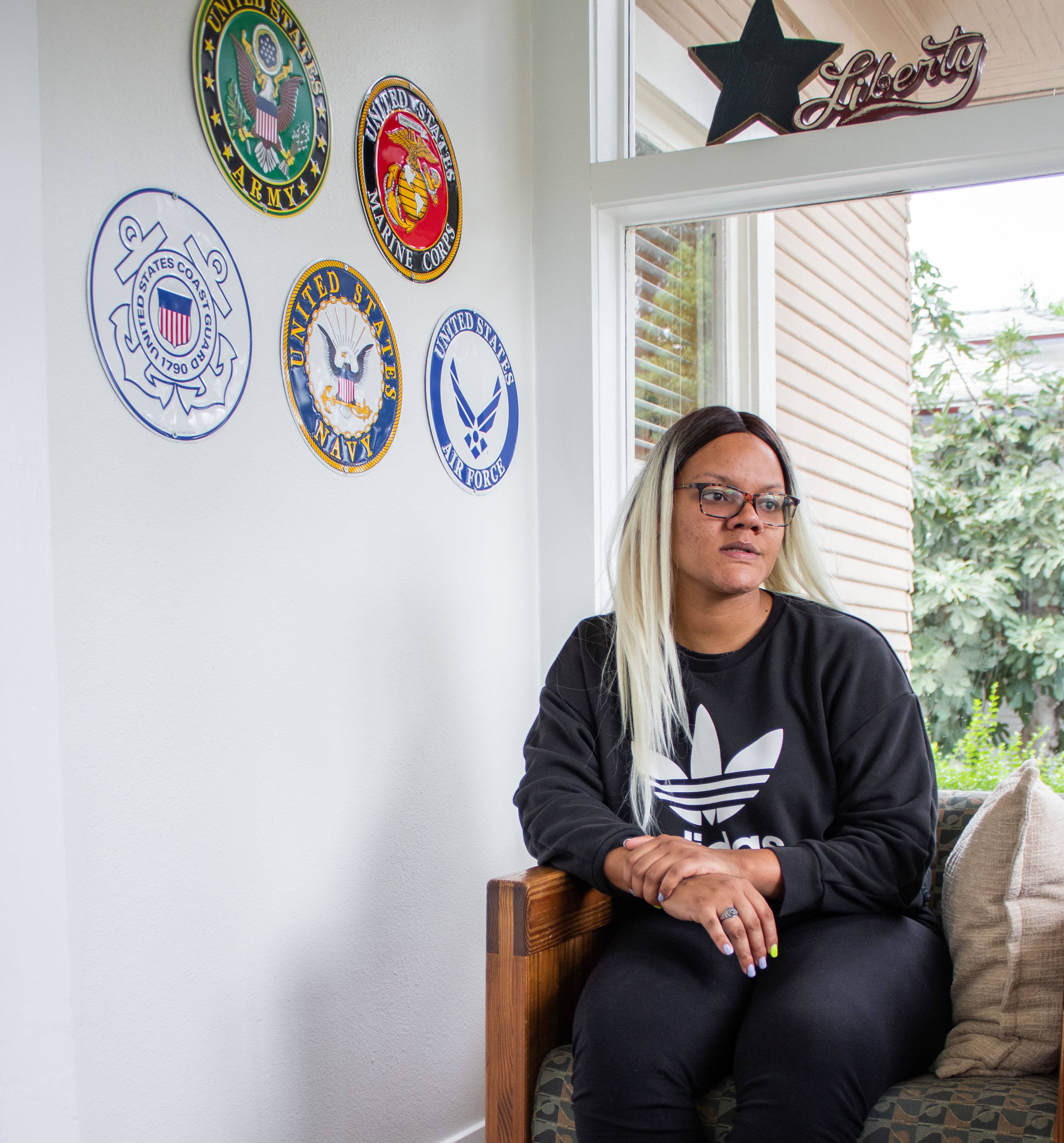