Much ado about nuttin’ 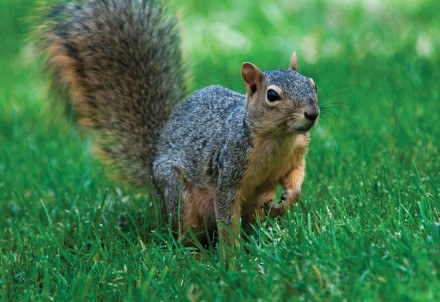 Innocent looks aid the deception as this fox squirrel scampers across the green lawns of the University of La Verne. / photo by Danielle Navarro

At first we thought they were friends. They gave us joy, and we gave them protection. We invited them to share our food and our land more than 100 years ago. Today, truces and treaties are off the table. Today, we must defend ourselves against the invasion.

The Eastern fox squirrel, an eastern United States native, was introduced to Southern California in 1904. Civil War and Spanish-American War veterans returned from areas like Kentucky and Tennessee to settle at the Veterans’ Home in West Los Angeles. After having served their country, they brought with them the squirrels, which they had taken to keeping as pets; though some speculate they were also kept for potential meals. According to a June 2011 blog by Lila Higgins, a manager at the Natural History Museum of L.A. County, the squirrels were later released by an “overzealous hospital administrator.” This administrator saw that the veterans were feeding the squirrels their table scraps and, finding such practices to be a misuse of government support, let the furry creatures free.

Since the fox squirrel did not immigrate to this area on its own and appears to be dominating a region to which it is not native, the species can technically be categorized as a non-native invasive species. Often times, invaders beat out native species in competition for resources or have a negative effect on the environment. According to federal law, La Verne biology professor Randy Good says, a species is considered invasive only if it causes human health problems, agriculture or property damage or biodiversity damage. “Biodiversity damage is more of a gray area,” Good says. “It has to be demonstrated that another species in the native ecosystem is being beat out for food or some other resource.”

Fox squirrels have a reddish tinge to their coloring and usually are 18 inches to 27 inches long. They have sharp claws to help with climbing and are omnivorous, meaning they will eat just about anything. They will feed on acorns, fungi, various beds of growth, nuts, a variety of fruits, including avocados. This broad diet makes these squirrels an especially inconvenient invader for a gardener. Creatures rarely follow the rules as strictly as scientists desire. For instance, many herbivores are protein-deficient and some have been observed turning carnivorous. So it goes with this squirrel as well. They are opportunists and have been known to sometimes raid birds’ nests and search out other red meat sources. Lacking resources such as food can often be a driving factor that moves an invasive species to another ecosystem, as the fox squirrel has now invaded La Verne and surrounding areas.

Jay Jones, ULV professor of biology, recalls the early 1990s when he was working at La Verne and does not recall there being any squirrels, gray or red, in the area. Today, he has observed the apparent influx and has noted the peculiar, if not obnoxious, eating habits of the fox squirrels. “Perhaps it is because they are unfamiliar with the food sources available in the area,” Jones says, “but I’ve seen several of these squirrels take an unripe piece of fruit from a tree, take one bite, and throw it down on the ground.” This could be seen as an example of these squirrels familiarizing themselves with the local food sources, but Jones notices something else that indicates the fox squirrel may be struggling with a kind of learning curve. “They don’t just do this once and then move on,” he says, “They will stay at one tree and continue eating the same fruit over and over again, always taking a bite and dropping it.”

Good adds this population increase must be due to lack of limiting factors. It could be a lack of predators or immunity to a disease that would normally curb the squirrel population. He recounts the story of when he and his wife were visiting the Rancho Santa Ana Botanical Gardens in Claremont, an area that is preserved similar to how it would have existed 150 years ago. While enjoying the garden, there arose a commotion from a short distance away—a violent squealing coming from ground level and squawking coming from the tree line. Upon further investigation, Good found a fox squirrel with a baby rabbit in its mouth. It seems the squirrel had stolen the bunny out of its den, and the commotion was the sound of the mother rabbit and even a blue jay attacking the squirrel, trying to free the bunny from the squirrel’s cruel grasp. “Squirrels are opportunists,” Good says, “They will eat meat. They don’t just bury nuts.”

Nuttin’ stands in their way

According to studies conducted by faculty and students on the La Verne campus, fewer gray squirrels are observed on campus every year. “This correlation does not necessarily indicate a cause-and-effect,” Jeffery Burkhart, La Verne professor of biology says. “I don’t think the fox squirrels are replacing the gray squirrels—they may just move them up into the mountains.”

Tom Scott, University of California at Riverside biology professor, agrees that the gray squirrels probably were driven out by the fox squirrels. “Gray squirrels are basically inhabitants of higher elevations, of conifers and oak woodlands,” Scott says. “La Verne is a little low in elevation for gray squirrels to be there naturally.” He says that the presence of fox squirrels is not by chance. The urbanization of these areas, the exotic fruit trees that accompany this development all bring with them these voracious critters. “They’re here because we give them the resources,” he says. “In a normal environment their food might be limited, but less so in an urban setting.” This abundance of exotic fruit and garden-grown vegetables is enough to keep a squirrel population fat and happy and is at the very least a contributing factor to this fox squirrel influx.

As for how to deal with these invaders, there are some eco-friendly solutions and some that are less-friendly. In Claremont, the gardeners at Farmscape Gardens, an urban farming company that provides organic-method maintenance to more than 80 gardens in the Los Angeles area, has dealt with squirrels. “At one garden where we saw the worst damage, we put in cages to cover the raised beds,” Farmscape co-owner Weston Westenborg says. “At others, we’ve used an organic chili-based powder that was moderately effective.” Westenborg notes that squirrels tend to leave larger plants alone, so he recommends established starts or physical barriers to protect young plants.

The state of California’s solution is effective and also quite final. It is against the law for a homeowner in California to trap a wild animal without permission from all neighbors within a 150-yard radius. Even after getting that permission, relocation of the invasive species is not an option, as it would have a detrimental effect on the local ecosystem. Scott speaks strongly against the relocation of invasive species, saying that catching a creature and releasing it somewhere unfamiliar is basically the same as killing it. “It just happens slowly through disease, predators, safety and other factors.” The potential is there for spreading disease. “There are a lot of things that are carried by mammals that are shared, and an animal can pick up and then transport it to this new place,” Scott says. People should think carefully about euthanasia, but if they’re moving an animal, they should make sure it’s not sick before dropping it somewhere else. “Transporting wildlife is not doing the moral thing, and people should think about it hard before doing it,” Tom says, “You wouldn’t drop a kid off at Skid Row.”

Given the inconvenience that squirrels have become, dropping them off at Skid Row could be an appealing option. Regardless, it appears the red fox squirrel is here to stay. The new status quo will have to adapt to this change, just as the squirrels must adjust to suburban life. 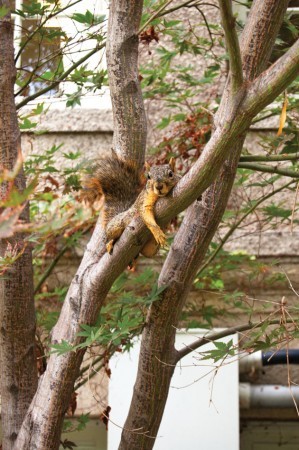 Tree hugger for a moment, a red fox squirrel makes itself comfortable as it looks down on scurrying University of La Verne students. / photo by Danielle Navarro

Catch a squirrel? The action recommended by the state is humane euthanasia. In an article published June 20 2011, Los Angeles Times reporter Steve Lopez interviewed Rebecca Dmytryk of Wild Rescue, a nonprofit organization dedicated to wildlife preservation. When Lopez asked Dmytryk to describe “humane euthanasia,” she answered that you could shoot it or use “blunt trauma to the head.” 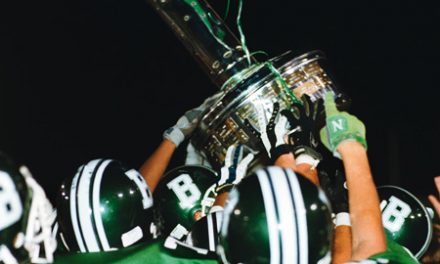 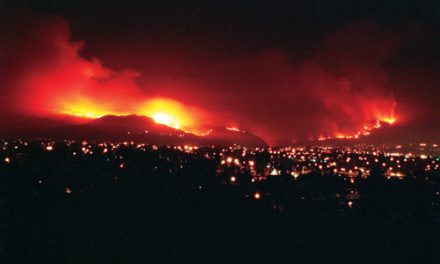 Fighting to Save Their World 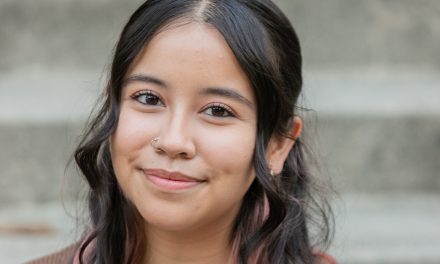