Puddingstone: Come for a day, stay for a lifetime 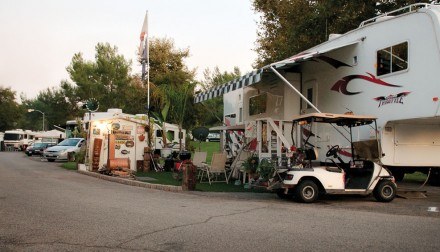 They come for a day and sometimes stay for a lifetime. East Shore RV Park at Puddingstone Lake offers both permanent and temporary lots for recreational vehicles. Fees vary depending on location. / photo by Warren Bessant

A short vacation has turned into a permanent residence for Don Fox. After coming to Puddingstone Lake from Moreno Valley in 1994 for a weekend, he ended up staying for many years in what he believes to be his own personal paradise. Fox is not alone. The East Shore R.V. Park in San Dimas, which touches Puddingstone Lake, is home to more than 300 permanent guests, as well as an abundance of daily campers. The beautifully landscaped establishment, nestled in the hills of Puddingstone Lake, was established in 1976 and continues to attract more and more campers. “We are 100 percent occupied on holiday weekends, and 90 percent full on regular summer weekends,” Dan Dempsey, East Shore R.V. Park manager, says. The park is allowed to have 60 percent of the park occupied by permanent residents at any time, under the code of Los Angeles County Parks and Recreation. A resident becomes a permanent resident by deciding to pay month-by-month, rather than by day or by week.

Although the park profits from the larger number of guests, more guests and larger recreational vehicles create new challenges for the park. “The camping crowd has become more sophisticated,” Dempsey says. “They want their Internet, and they want more of a channel line up.” The park provides Internet in the main office, but not at the campsites, and the television channels are limited to basic cable. Adjusting to the modern era of R.V. living is prompting future renovation park models. Increasingly, Dempsey has seen the park grow. Since his 1983 start as then maintenance manager, he has overseen the construction of 200 new sites over a two-year period. The larger R.V.s require the lengthening of the current sites, along with an increase in the power hookup amps provided. The Waste Management Company picks up 10 tons of trash from the park every week; Dempsey says one of the park’s biggest problems is controlling trash.

While many of the campers at East Shore R.V. Park only stay for the weekend, others stay on. There are retired individuals who have lived in the park for more than 20 years, and those who stay for just a few years. Local projects or events can bring new residents in for limited stays of a few years. There are linemen staying in the park for a few years because of long-term Edison projects. California State Polytechnic University Pomona students live in the park during the nine-month duration of their school year. When the Olympics took place in Los Angeles, the French Olympic shooting team stayed in the park. Some, like Fox, only planned to stay for a short period. “I came here just to travel,” says now park ranger and resident Don Fox. “It was supposed to be a real short visit.” He loved the beautiful landscape and the atmosphere, and, after living at East Shore for 11 years, he became a park ranger. The view from Fox’s trailer is a little bit of everything. A luscious landscape and view of green grass, tall trees, mountains, hills and the lake make up Fox’s front and backyard.

Norman and Donna Baird have lived in the park for more than 13 years, retired and content. “We love it here,” Donna says. “We sold our house and planned to travel. This was supposed to be a six-month stop. We dropped the anchor,” Norman says. “This is it. We have the lake, the mountains, which get snow in the winter, and a beautiful setting.” The Bairds have an envious elevated corner lot setting above the lake. Their yard is larger than average, with room for a decent size table with chairs, a storage shed and a barbecue. Stories such as Fox’s and the Baird’s ring throughout East Shore R.V. Park. Barry Smith lived in San Dimas for 30 years before moving to East Shore. “I sold my house and decided to take the fifth wheel here while I looked for a new place,” he says. “After about a month, I told my girlfriend it is amazing here; let’s upgrade the trailer and stay.” Nearly two years later, Barry still resides here and is still bragging of his backyard’s beauty. One thing the majority of the residents have in common is a relaxing environment filled with some of nature’s best assets.

Full service, for a price

The camping price varies depending on stay duration, as well as site location. Daily rates range from $41-$51, with an additional charge of $5 on holidays. Weekly rates range from $248-$306 (depending on location) and are limited to a maximum of 28 days. In order to stay a month or more, campers must have a trailer, motor home or fifth wheel of at least 26 feet and no older than 10 years. These monthly rates range from $750-$1,040, with a charge of $2 a day per camper over two campers, as well $2 per pet. Tent camping is an option, which the park refers to as wilderness camping, at $27 per night with up to three campers included. Additional campers are accommodated at $9 each.

The park offers convenient services, including rental golf carts for $35 a month. Dempsey says the carts are almost always completely rented, given the hilly terrain. The gift shop offers DVD rentals, bait and fishing equipment, fishing licenses, ice, gifts, souvenirs, telephone supplies, copy and fax services. It is a popular location. The shop has everything a camper might need from food and drinks, to basic R.V. repair parts. “Snacks, beer and propane are our most popular items in the store,” says Evalina Alarcon, a shop employee. “We also sell a lot of lottery tickets. We sell about $80 in lottery tickets everyday.” The shop’s atmosphere is one you might expect for a community of 300. Everyone appears to know each other. The light hearted atmosphere has much to do with the daily visits from park residents. Carl Baird is a store regular. “I usually leave these girls laughing,” says Baird, who considers himself a part-time comedian. “I love camping; it is way better than living in an apartment building.” Most of the residents at East Shore seem to have built similar relationships with the shop employees, as well as a strong social network with each other. Besides the community barbecues and potlucks, East Shore R.V. Park is also known for its community efforts to raise money for worthy causes. There are many fundraisers held throughout the year for foundations. “We have bake sales, ice cream socials and pancake breakfasts,” says Alarcon. The most recent fundraisers have been for Shoes that Fit, Wild Wings, San Dimas Heroes and leukemia organizations. The park also rents out its recreation hall and holds weddings on the premises. “Many of our residents have gotten married here,” says Alarcon. “It really is a beautiful setting.” The recreation hall is available to registered campers for two hours complimentary, with a charge of $50 for more than two hours and an attendant fee of $15 per hour required for parties of more than 45 people. R.V. storage is available for $10 a day, $40 a week and $110 a month. Mini storage, eight feet by 10 feet is $80, and eight feet by 20 feet is $120.

Camping as a way of life

Some of the permanent residents at East Shore R.V. Park love to show they plan to stay. Many of the recreational vehicles have become stationary trailers, with decking, box skirts around the wheels and even wheels removed. Some of the R.V.s appear as if they were built on site as trailers. The permanent style additions are not usually for looks; they are for function. Added decking creates a nice raised platform for a patio, as well as easier access to the R.V. Other additions have similar effects, and often are custom to the trailer.

Abandoned trailers are also scattered throughout East Shore R.V. Park. Although not permitted, residents will leave their trailers for the park to remove on its own dime. “Once in a while we have residents who leave and never come back,” Dempsey says. “A lot of times the R.V.s do not run, so it is easier and cheaper for them to leave them here.” This places the burden on the park to have the trailer removed. First an eviction notice is placed on the door to inform the resident they are being evicted for non-payment. There is a six-month waiting period before the park removes the trailer, but the trailer still remains in storage on site. Finally, after an extended period of storage time, the police will remove the R.V. from the park.

One aspect of owning an R.V. is maintenance, including washing, cleaning, repairs and starting the vehicle frequently. The main office entrance of East Shore R.V. Park displays a flooding array of more than 50 different cards from outside businesses that target these needs. There are also park residents who work on R.V.s and who detail the R.V.s, as well. “It is about a 50/50 split,” Dempsey says in reference to whether the residents of East Shore R.V. Park prefer to outsource or stay in home for their R.V. needs. R.V. maintenance can be a chore, but it is no different from that performed for homes or cars. The main difference is the R.V.s are a combination of both a house and a vehicle. East Shore also offers on-site gasoline for residents, an added convenience so the large vehicles do not have to be maneuvered regularly into city traffic areas.

While water craft capture scenic Puddingstone Lake, permanent residents at East Shore do not commonly use the lake for recreational boating. But fishing is usually on their agenda. “Fishing is very popular here,” says Alarcon. “A lot of professional fishers live here.” The shop Alarcon works in has a preponderance of fishing equipment. The common practice of those who fish Puddingstone is “catch and release.” Meanwhile, the Cal Poly, Pomona students have returned from classes. Some are sitting in chairs, academic books in hand, with the trappings of student life—bikes, a football and lawn boards—all under foot. It is not quite life at the beach, but it is close.

The developers of East Shore RV Park intended to leave the Park open and less urban. Most RV lots at East Shore (pictured from the southeast park corner) have adjacent grass lawns and nearby trees. The daily RV rates start at $41, while monthly rates start at $750. Extra fees come for pets and golf cart rentals. / photo by Warren Bessant 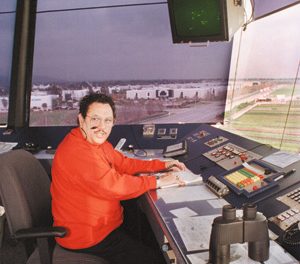 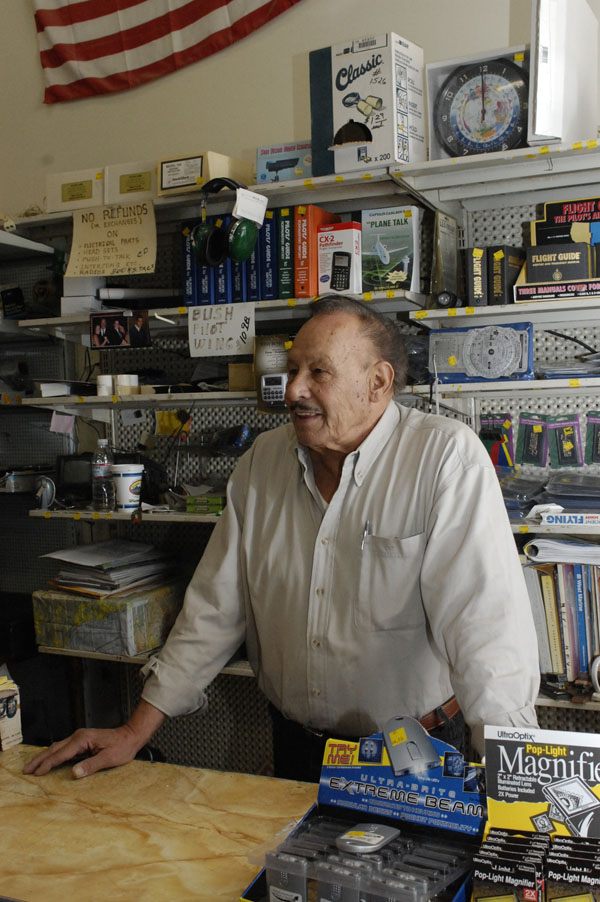 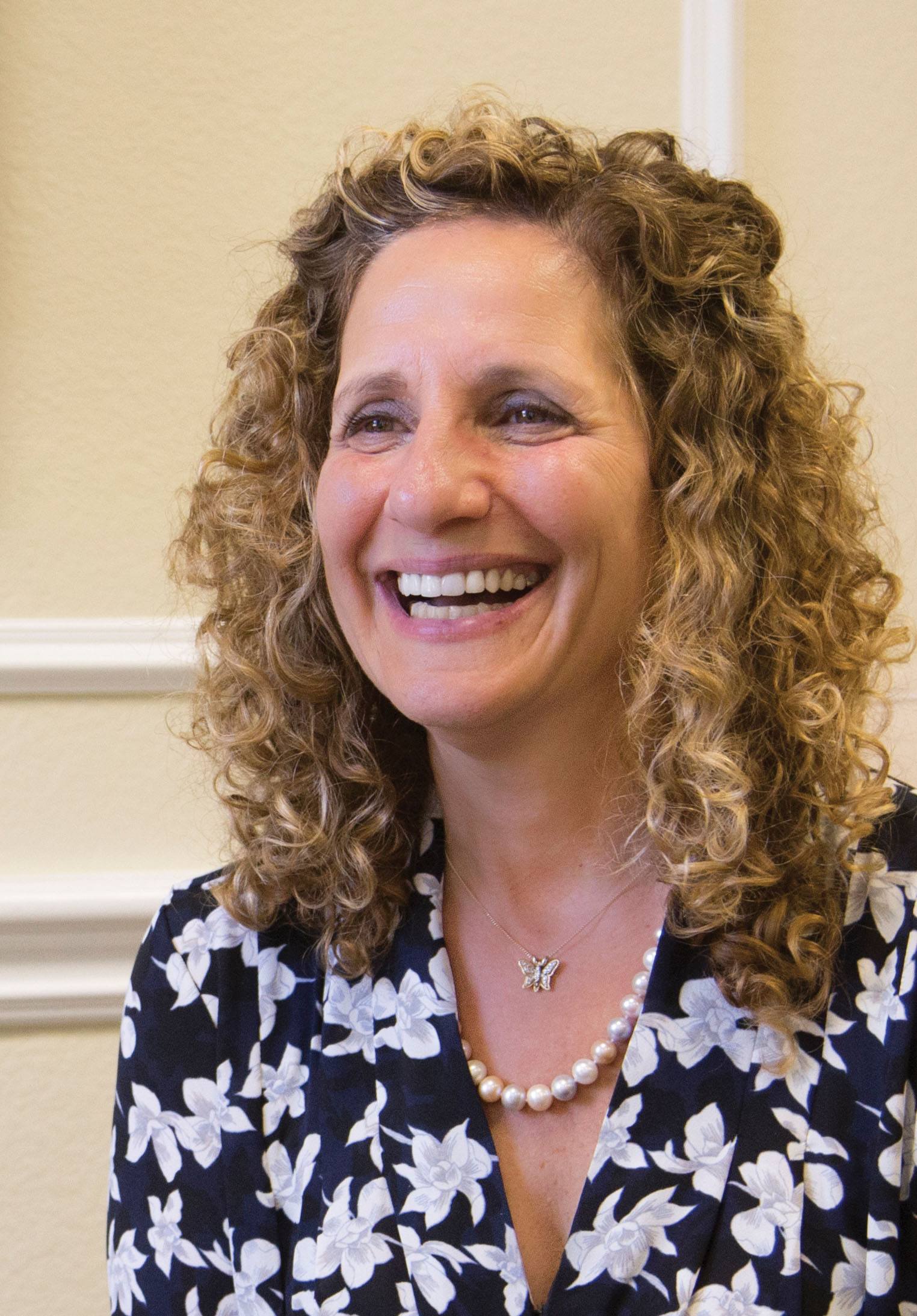 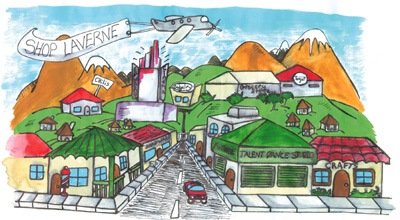