The Patio spices up La Verne. 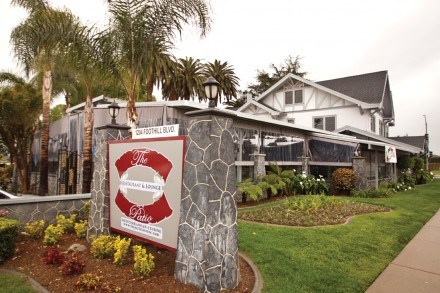 No longer surrounded by orange groves, the 1911 Craftsman house built by rancher W.T. Michael is now reincarnated as “The Patio,” which beckons to Foothill Boulevard patrons with its featured Mediterranean cuisine. / photo by Debora Escobar

They come for the live entertainment, the hookah bar, but especially for the food. One of La Verne’s newest restaurants is located in one of its oldest houses. The historical Craftsman beckons to patrons right at the city’s Foothill Boulevard western entrance. The building itself is a Craftsman visual feast, with crown moldings in the ceilings, crystal chandeliers and maroon colored drapes, along with a blazing sandstone fireplace that presents a romantic setting. The dark linens on the windows give it a cozy and relaxing ambiance to go along with the delicious food. Guests can also choose to be seated outside on the patio, which is outfitted with heaters, hookahs and a rock waterfall. The patio setting replaced a pool and seats 125 people. It offers tables for big parties.

Gary Antaki, a dentist by trade, has lived in Claremont for three years. In February, he opened The Patio with his partners, keeping Middle Eastern tradition in mind. Gary and his partners pride themselves on their family recipes containing quality ingredients, such as virgin olive oil, curry and plenty of spices. Gary travels to and from his Santa Maria dental practice every other week to trade off restaurant management duties with his partners.

The Patio is located in one of La Verne’s historical grove houses and was built in 1911 by realtor W.T. Michael at 1204 Foothill Blvd. Originally situated in a sea of orange trees, the home, now at the terminus of the 210 Foothill Freeway exit, has undergone several reincarnations, including time spent as the base for a citrus nursery. During World War II, the 69th infantry from New York was stationed for training at the Los Angeles County Fairgrounds, and its assignment was to patrol the homes and groves of this part of the Pomona Valley, which included Michael’s home. Vacant for many years, the house was renovated in the late 1970s and opened as the Grapevine Restaurant. Subsequent renovations followed with several restaurants opening and closing, including the Wingate House, The Big Yellow House, Papa Leonie’s Pizza and Pasta Palace. 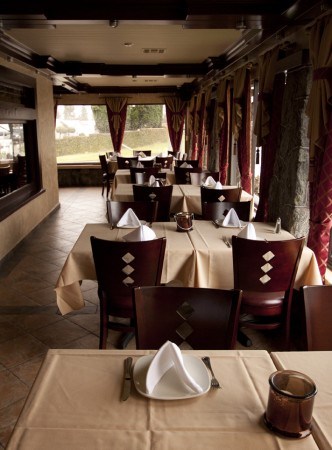 Despite this revolving door history, new owner Gary says The Patio is expanding its clientele. He says he has twice-a-week customers who return to try different menu items and business is picking up. He notes that the menu features traditional Mediterranean and Middle Eastern food with recipes that have been handed down from generation-to-generation. And although hookahs are featured in the patio area, Gary notes that customers should come in and enjoy the food too. The Patio offers live entertainment with musicians like Ibrahim Masri, a singer who accompanies himself on the oud, a pear-shaped string instrument.

Featured on the menu is the Taj Mahal with shrimp, a house specialty. The jumbo shrimps are grilled and sautéed with extra virgin olive oil, garlic and fresh ginger. Sesame paste is added in the dish followed by vegetables and mushrooms. Coconut milk and curry is included at the customer’s request. The Taj Mahal with shrimp is served with rice pilaf. “You have to mix the rice with the sauce in the plate,” says Imad Hakim, master chef. Rice can be substituted for fries or salad. Imad says that olive oil is an essential ingredient in Middle Eastern food and gives the food extra flavor. The use of spices on select dishes is matched well for an authentic eating experience. Traditional desserts like Ashta with honey and Baklava top off a great dinner. The Baklava is a phyllo dough filled with walnuts and includes rose water and pistachios. “The ingredients are fresh and healthy,” Gary says. The restaurant offers a fully stocked bar and appetizer plates start at $8. The lunch menu, from 11 a.m. to 3 p.m., features beef kabob sandwiches, accompanied by hummus and either fries or salad. Sandwich prices range from $6 to $8. Featured, too, is fattoush salad, made with pita bread and mixed greens.

An old La Verne craftsman house is now a Mediterranean restaurant once again. Enjoy the food, hookah and entertainment in an historic La Verne setting. 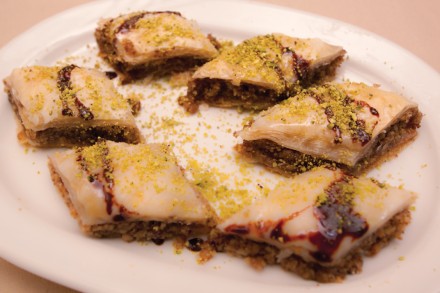 One of The Patio’s most popular desserts is baklava. Master chef Imad Hakim says that baklava originated from Greek culture yet is an important part of Mediterranean cuisine. / photo by Debora Escobar

It is an instrument straight from Alice in Wonderland: the nargile, otherwise known as the hookah, a water pipe of Middle Eastern origin, used to smoke flavored tobacco. When smoking the hookah, the smoke passes through water which diffuses its harshness.

The Patio has 110 hookahs available and offers a range of flavors. El-fakher flavors include double apple, melon, mint, peach and many more. The nour flavors include red powder, lemon and mint. Hookah prices are $12 for each flavor. If you are not a smoker and want to try it, heads up–it gives you a bit of head change. You will feel relaxed just like the caterpillar in Alice in Wonderland. 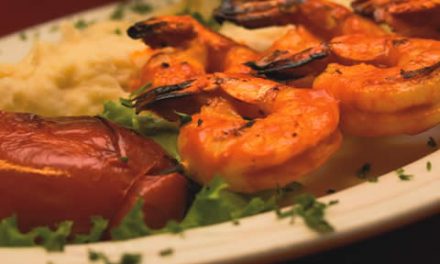 From vineyards to villages