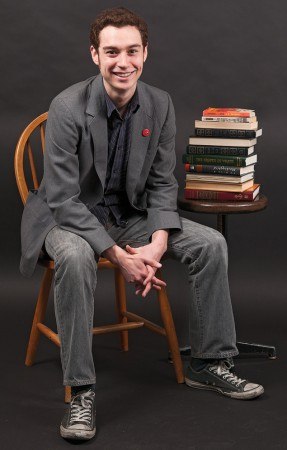 I love stories. I have found that anything can be made better with a story. One of my favorite things about stories is that they can be shared. The ability to share in an experience, whether you were there or not, whether it happened or not—makes for a magical experience.

A story that tells how someone beat the odds can inspire. A story that shows the folly of someone who acted selfishly can teach selflessness. Stories, whether written by a novelist or a journalist, can inform and entertain. And the ability to combine these elements effectively is, I think, one of humanity’s greatest gifts. Stories separate humans from the animals. There is no other known species on the planet that communicates through stories.

Of all the ways to share stories, one of the most effective is to use images with words. Comic creator Harvey Pekar says, “You can do anything with words and pictures.” That is why I do not just like comic books—I love them. I own thousands of comic books. I have always loved stories, but I fell for comics when I was 15 years old. A strong nostalgia exists between me and the pages of a comic book. No matter where I am in life, comics will be dear to me.

The majority of modern comic books tell stories of superheroics. The story of an individual who uses his abilities to help others is commonly used to share ideals that many readers probably already knew but may have forgotten. Peter Parker’s adventures as Spider-Man show readers how to be a good steward of one’s fortune with the phrase, “With great power comes great responsibility.” Superman tells the story of the immigrant who not only finds a home among people who are not his own, but also helps others however he can. Tony Stark, the Iron Man, is a medical invalid who uses the power of his mind to design technology that helps him to not only survive a life-threatening injury, but to excel in life. Bruce Wayne lost his parents as a child, but in spite of great tragedy, he hones his mind and body to become the peak of humanity, and uses his abilities to help the helpless and to find justice in an unjust world. In Neil Gaiman’s “The Sandman,” Morpheus, the Dream King, exemplifies the power of imagination and reveals the thin line that separates humanity from its dreams.

These are just a few of my heroes. Countless other stories are told that show readers various virtues in impactful ways. These heroes give me something to strive for, something to hope for. They give me someone to emulate, and not just by wearing Aquaman Underoos.

Comics are a modern mythology with a rich history. This medium and its characters have undergone endless permutations. What remains through the years, the censorship, the ups and downs of sales, is the truth of the story.

I find story to be an art form. As comic creator Alan Moore says in his work, “V for Vendetta,” “Artists use lies to tell the truth.” In my case, writers use stories to tell the truth. Stories are made of words. And someone smarter than I once told me that words are all we have. So I share these words of truth with you now: A story can change the world. I think I read that on a coffee mug once.