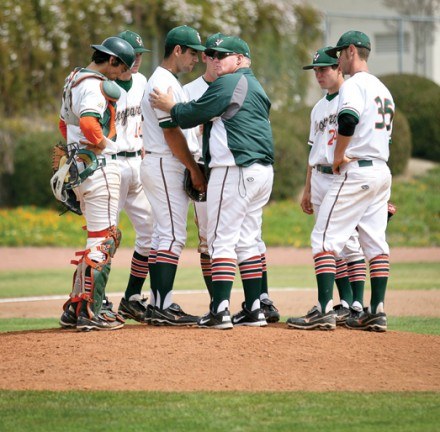 La Verne Head Coach Scott Winterburn offers encouragement to pitcher Javi Iniguez, with infield players gathering around to assess the current game situation, during a meeting at the mound in the midst of a tense game against Claremont McKenna College. The coach frequents the mound during games to make sure his players are on track for a win. / photo by Mitchell Aleman

He is a man who appreciates the little things–the core values that make up a champion, a successful person, a team. He loves what is closest to him in life: his family, his work. He gives credit to the mentors in his life for guiding him in the right direction. He expects the best out of the athletes he coaches, to turn them into “Leos.”

This man is Scott Winterburn, the head baseball coach at the University of La Verne. In his 12th season at the University, he has enjoyed success through collective values that shape the athletes he coaches and their willingness to win. Most importantly, he cares about those who surround him. In return, his players have brought him four Southern California Intercollegiate Athletic Conference championships. Other recognition includes multiple legacy La Verne baseball players receiving SCIAC Player of the Year, Golden Glove and All-American honors. For himself, he garnered the SCIAC Coach of the Year Award in 2005.

Scott claims that his philosophies are still evolving, but one thing has always been steadfast: He wants to create a Leo. To Scott, being a Leo means something. It is a process that gets each athlete to understand, commit and buy into what the program requires. “The thing that I value most is that I want our program to reflect life as closely as possible.” In order to do this, Scott believes that relationships have to be made with the athletes, not just any kind though, but close relationships, the kind that take time to create—caring relationships to the point where he knows which players have girlfriends, what they like to do in their spare time, and what they want to do after graduation. Once these relationships have been established, those involved must work hard on them, and “only then do lessons become valuable,” Scott says.

The little things make a huge difference to this fundamental man. Saying “please,” “thank you” and “excuse me” shows him class; it sets people apart in his eyes. He sets out to improve the men who come into his program. His is a very intimate relationship, yet there is distance at the same time. The same applies to Scott’s children. “I’m not their buddy, but I’m there in every way,” he says with a sense of ease in his voice. “I treat them like my son and daughter. They have plenty of buddies. I’m there to tell them the truth. I own the truth.”

Something well-known about Scott is that he values the process as much as the results. “He is probably one of the hardest working people I know,” says Paul Alvarez, professor of Movement and Sports Science, adding, “both what you see and what a lot of people don’t see.”

On this day, Scott sits in his office with assistant coach Daniel Soriano. Their computers burn bright in front of them as they search for potential student-athletes. They ponder over these baseball candidates. It is evident that each athlete is carefully evaluated before he even has a chance at becoming a Leo. “Burn,” as Scott is referred to by those who know him, wants to ensure that athletes will fit into his program, just another step that will perpetuate future program success. “The first thing I try to find out is, ‘Can they fit here?’ That’s the most important thing,” Scott says. “The backbone of this program is people who love being here.”

Scott wants everyone to learn appropriate lessons from key situations, to react appropriately to the event, then to move forward with new understanding. This is an important mindset for him. If a player struggles in practice, it excites him to see that player come to the game improved because he put in thought after practice. This technique comes from one of his mentors, Rex Huigens, former Movement and Sports Science Department chair. The idea is to allow players, having failed somehow, to go home with the thought of failure in the back of their mind. After analyzing the failure and finding the personal corrective solution, players will succeed the next time. “The athlete has to start to understand that the opportunity is right here, right now,” Scott says. “Every experience impacts us. We’re not sure how it will impact us until it’s over, but over time we can look back and see how that impact was.” Experiences shape the paths of people’s lives, and this is a core baseball belief for dedicated Coach Winterburn.

Scott knew that he loved baseball. He claims it was the only reason he attended college, but he did not know that it would become his life’s passion until he was a junior at Texas A&M University. While majoring in agricultural economics, a flash of inspiration came to him while undertaking a pedestrian assignment. He remembers thinking, “Is this what I want to do for the rest of my life?” His father encouraged him to do something he liked and to work hard at it, and that day Scott realized that thing was coaching baseball. “It was very clear to me, ‘Hey I want to coach,’” Scott says. “I felt like that’s what I was supposed to do.” The people who have influenced Scott have been involved in baseball. His first baseball memories are of him and his father playing catch in their front yard and then his playing games in the street with friends. Scott says that his father was a great mentor in life and sports. Aside from his father, Scott cites influential coaches: George Dusic, his little league coach; John Meiers, his coach at Arcadia High School; Skip Claprood, his coach at Citrus College; and Tony Barbon, the coach at Azusa Pacific University, with whom Scott worked at the beginning of his coaching career. “It’s the mentors I had in life,” he says. “I am the product of people who influenced me. I don’t claim to have invented anything.”

Scott takes an alternative look at everything in life. What one takes from a situation may be different from how he interprets it. He sits in his office with its walls adorned with photos of family and baseball players, certificates from past All-American or All-Region athletes, baseball books and personal themed baseball memorabilia. Scott says that it is the goal of an athlete to try his best to win. However, he does not condone winning at all costs. In the dugout during La Verne baseball games, he blends in like a chameleon with the rest of the team. In his No. 14 La Verne uniform, he cheers on the batters and commends the fielders for nice plays. One only realizes that he is the coach when he is unsatisfied, when he sternly gives corrective advice to the team between innings or expresses rule book-anchored discontent toward an umpire. When he gets fired up, it creates a serious atmosphere that makes everything seem more meaningful. When that happens, the players react constructively, another testament to his creation of a Leo.

“Read the defense. I could talk all day about it; it’s no secret,” Scott says to junior first baseman Michael Stewart during a crucial conference game against Cal Lutheran on April 7. At the same time, Scott knows what matters at the end of the day. Hitting coach Scott Marcus says at the start of his senior year, he was slapped with his parents’ divorce and the death of his older brother. “No matter how I performed on the field, it didn’t affect how he treated me off of it. He has a good ability to know what’s important,” the All-American player says. “I will always have a certain level of respect for him.”

Burn expects the best from his players and deservedly so, because he first puts forth his best. When his players leave his program, they are ready for what the world has to offer; they are Leos. His baseball philosophies reflect the way he looks at life. And his life is a treasure chest of the things he values most.

It is Friday, April 27. A dog pile is taking place on the mound immediately following the Whittier strikeout that brought the 2012 SCIAC title to Scott Winterburn. He pauses for a quick moment to soak in the secret pride that wells within. Then, clapping in appreciation, he quickly jogs out to join his new champions. 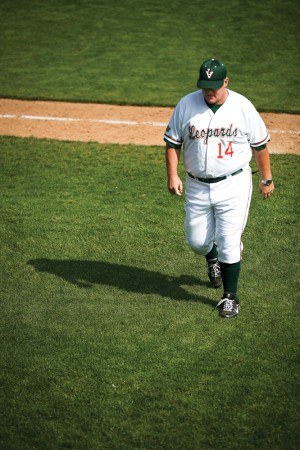 His lesson delivered, Coach Scott Winterburn, returns to the Leopard dugout after coaching third base. Not content to quietly sit in the dugout, the coach is intensely involved in the game, teaching in the dugout, giving hand signals for runners on base or at bat, and calling timeouts to directly talk to his players. / photo by Mitchell Aleman

No home, no matter

Ben Hines Field no longer exists, leaving the Leopard baseball team players homeless. But their hard work and determination came to fruition on April 27 when they captured their 20th Southern California Intercollegiate Athletic Conference championship. Practicing at nearby Damien High School and at the Southern California Baseball-Softball Academy was no hindrance. In the fall, the team met about the upcoming season and their lack of a home, but never again spoke about it. Not having a field would never be an excuse. Hitting Coach Scott Marcus said that graduate assistant Jon-Michael Hattabaugh held batting practice sessions, some as late as 10 p.m. Practices ran until 4:30 or 5 p.m., but players regularly stayed after.

Usually only five or six pitchers are used during the season, but this season the Leos used 10 or 11. Pitching Coach Gabe Miranda worked with what Head Coach Scott Winterburn calls a “specialty staff.” “That’s the job Gabe Miranda has done; he’s done a stellar pitching coach job this season,” Winterburn says. Miranda and the staff held meetings to raise issues and address them up front. “They were struggling with all of the nuances of the game,” Miranda says. Some pitchers would pitch a majority of the game, some a few innings, and some only one out. But that was what the staff knew it needed to do to succeed. “No one whined or cried about it; it’s just the way the pitching staff was this year,” Miranda says.

Each season, the senior class takes on a big role. There was no captain, but the seniors led the team. “This senior class did a great job,” Winterburn says. “They had a lot of responsibility, and they got it all done.” They organized and ran offseason practices. Miranda, a school teacher, relied on the senior pitchers to run their practices until he arrived.

The team had something that cannot be practiced or implemented by coaches: camaraderie. Marcus recalls days when players discussed where they would eat after practice. “They hang out all the time,” he says. “They’re brothers, and there’s something to be said about that.” 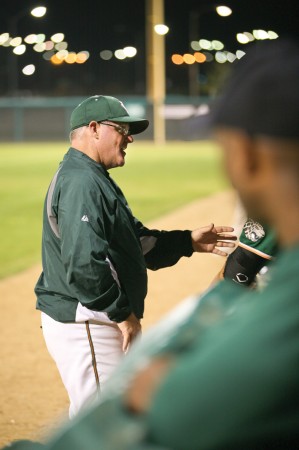 Head Coach Scott Winterburn takes to the front of the dugout to instruct his Leopard baseball players on how to turn the game’s momentum in their favor. / photo by Mitchell Aleman 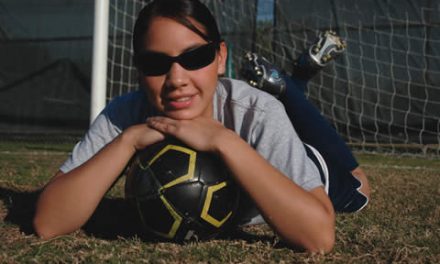 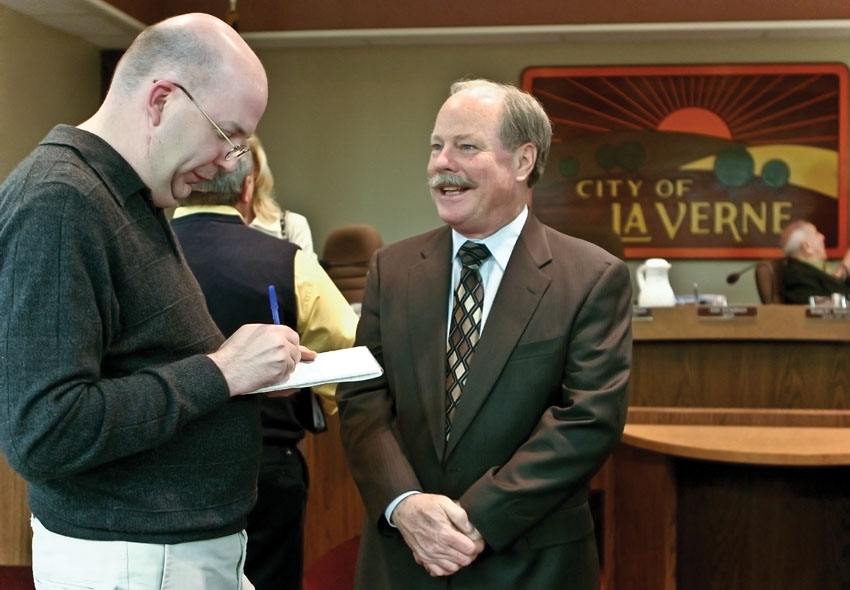