Two wheels are better than four. 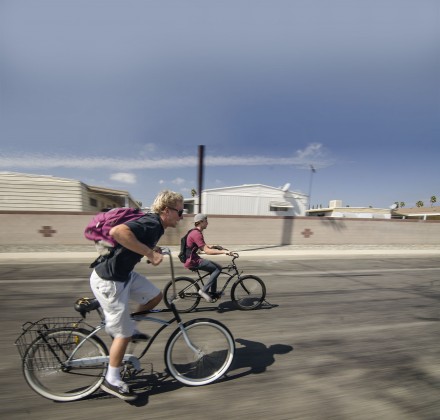 The polyrhythmic beat of a chain clank against a chainring becomes louder as a student comes up behind walkers on the sidewalk near the Barkley Building. The pedestrians feel the wind of his presence and the sound of crunching leaves as he weaves around them, inches to spare between curb and walkers. He is going the wrong way on the sidewalk, wears no helmet and keeps his cool despite being unsteady on his machine. Welcome to the University of La Verne’s fledgling bike culture.

Two wheels are becoming the new norm for students and faculty at La Verne, born of necessity as parking tightens and people navigate travel distances that cover the University’s east to west one-half mile span and north to south .3 mile traverse. The distances are causing students to seek out means of travel between classes, dorms and sports venues.

Cooper Durrette, business administration major, and Scott Jones, liberal studies major, are both water polo players who ride to school every day and navigate between campus and practice on their bikes. They own “old school” bikes that have been painted several times plus bikes “worth a few paychecks” but “well worth it,” says Durrette. Their trek from Pomona begins at the pale light of dawn for 6 a.m. water polo practice at Las Flores pool. “There’s no on-going cost to it; we’ve got the legs for it. It’s our means of transportation, more than anything else,” Durrette says. Following practice, they ride the mile to school and go to class. Their bikes are usually locked outside classroom doors.

The bike culture has swept in the casual user along with the serious aficionado. Dion Johnson, director of the ULV Art Department galleries, shared his biking passion by starting a University bike club spring semester 2010 that featured organized rides. The club phased out with the graduation of the founding members. Nevertheless, for Johnson, his bike is utilized more than for entertainment and socialization. As often as he can, he uses it to commute to La Verne from his home in Pasadena. “Being a member of Greenpeace and being aware of environmental issues, I think it’s very important to bicycle as a practical means of things as much as possible, so that’s really important to me.” Johnson cites safety being at the top of his concerns. He has attended Pasadena City Planning meetings geared to bike lanes; he sticks to bike routes where traffic is calmed or sparse; he offers advice for night riders: ”If I cycle at night, I want to be lit up like a Christmas tree. I tend to wear bright colors and have lights if I’m riding at night, and that’s well in your best interest.” He frequents Coates Cycling and trusts them implicitly.

Corey McCroskey, owner of Coates Cyclery at Towne Avenue and Foothill Boulevard, has been in the bike industry for more than 25 years and has dealt with cyclists who just need a beach cruiser to guys looking for the “persona of being an athlete,” with high end road bikes. McCroskey grew up in the area and has seen the change in the roads and traffic patterns. Knowing where the safe routes lie and the safest time to ride, he sponsors regular rides out of his shop. “We wait for everyone; we don’t drop anyone,” he says. His advice: “If you are going east to west or reverse, use Bonita Avenue. I’d stay off Arrow Highway. It is pretty treacherous near Fairplex.”

Bike riding does come with its cautionary tales. Many La Verne riders can relate traffic stories where their lives were in danger. A study by the University of Michigan Transportation Research Institute suggests that drivers in Los Angeles kill or harm bicyclists at significantly higher rates than drivers nationally.

The statistics are personal for Jonathan Reed, University of La Verne dean of the College of Arts and Sciences. About 20 years ago, he was hit and run over by a car. The accident left him in the hospital for eight days. “There wasn’t anything I could have done; it just turned in front of me,” says Reed. Nevertheless, the accident did not break his passion for cycling. He continues to ride 50-80 miles a week but now with a wary eye. He believes safety starts with driver awareness and actions around cyclists. “I still on occasion will see drivers who are overly aggressive toward bicyclists and not being considerate.”

Al Clark, associate vice president of academic affairs, long a commuter, recounts his own close call. He was riding close to the curb when he encountered a driver hunting for a parking place. Suddenly, the car made a right without signaling. Clark locked up the bike’s brakes but still slammed into the car. He went to the emergency room but fortunately did not sustain a lingering health problem. “Drivers are looking for headlights, not little blinking lights on a very slow moving platform,” he says.

The cities of La Verne and Claremont recently have invested grant money to quiet traffic on Bonita Avenue from four lanes to two and have added a wide bike lane to encourage and accommodate bikes. In its proposed 2014 or 2015 budgets are city of La Verne plans to improve road conditions, says Daniel Keesey, director of public works, city of La Verne. As a cautionary note, he says bicycles are usually the last thing to get budget attention. For Reed and Clark, this is not good news, since they both use local transportation corridors to commute to Claremont. Clark peddles 4.2 miles one way to the University; Reed traverses about 5.2 miles one-way. Clark says he arrives at work after 15 minutes of peddling on his trail bike, and it takes 20 minutes to go home. For Reed, on his road bike, his ride home is usually never a straight shot. He partners his commute with his triathlon training and sometimes takes Wheeler Avenue north to Golden Hills Road east, turning south on Esperanza Drive with a left on Baseline Road to ease home. “You clear out your mind, and you get home feeling refreshed,” he says. If he does decide to ride straight home, Reed zips east on Bonita Avenue.

The pain coming from your empty wallet might not be physical, but strong emotions are stirred with the loss of a bike. Bike prices range from swap meet cobbled versions to top of the line sleek machines: translated, $100 to $10,000. According to the 2011 Jeanne Clery Act Report from the University, since September 2012, six bikes have been reported stolen. Five were related thefts—someone with a backpack and a small set of bolt cutters sniped lock cables says Jeff Clark, associate director of Campus Safety. The thief has since been apprehended by the La Verne Police Department. Close calls abound. Art major Jourdan Simmonds suspects that someone attempted to steal his bike in the same fashion. He saw cuts on his bike lock, which caused him to invest in a more sturdy U-Lock, the same lock that Campus Safety Officers use for their Smith and Weston bikes. Clark also says to lock a bike to a rack. “Believe it or not, people will leave their bike locked to nothing.” Campus Safety officers routinely take bikes—locked to themselves or unlocked—to the lost and found to prevent possible theft. 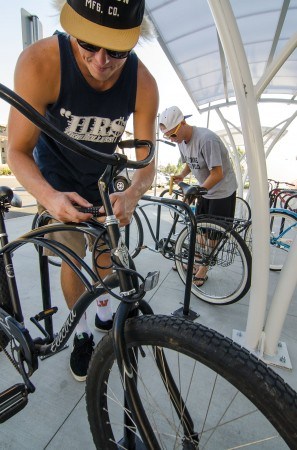 Free from no parking signs and tickets, junior Colin Wheatly and senior Scott Jones secure their bikes before heading to class. The two are part of a growing number of students who use two wheels to commute. / photo by Zachary Horton

In the University’s effort to earn a Leadership in Energy and Environmental Design certificate for the Vista La Verne Residence Hall, officials installed 30 covered bike rack spots east of the building in October. The installation took some effort, explains Raymond “Chip” West. In an office filled with more than a dozen blueprints in a holding box, the senior director of central services and capital planning explains the bike rack delay on contract juggling between two manufactures mixed in with the quest for city approval. In the past five years, West says he has seen the bike culture at the University grow significantly. Just in the past two years, he has doubled the number of bike racks on campus. He cites the increase to parking challenges, to the recent growth of the number of people living on campus and to students and faculty seeking alternative means of transportation.

The University offers Rideshare Program incentives for employees that pays bikers $2 a day. Sports Science and Science Pavilion showers and lockers are there for the asking. Clark brings two days’ worth of clothes at times due to his large locker. “I mean, I’ve had a locker here for 35 years, and that means I’ve had a big locker. The first locker you get you can barely fit your helmet,” says Clark. He says that in 1890 the local area included many bicycle clubs. “It was either horses, you walk, or you get a bike.” Young people would join these clubs and use bicycles as a toy to show off like a “motorcycle or hot little car.” Perhaps it is no different now then it was back in 1890, with the huge advancements in mechanical rotation, but now the wheel completes its turn. “Everything kind of comes full circle,” says McCormick. “The newest thing, the fixed wheel kids, they are a new generation discovering something old. And that kid could be the next professional cyclist. Getting kids on bikes is really what we should do.”

Bike vs. Car: Which is faster? 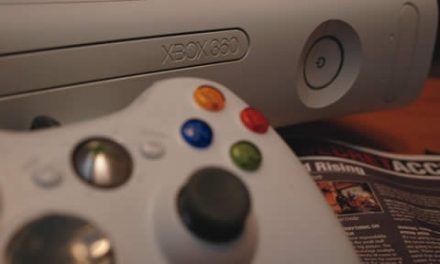