A class worth fighting for 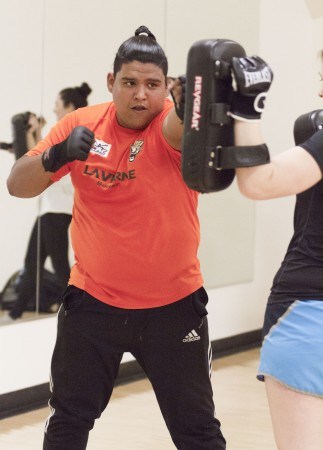 Alfonso Moreno jabs at his opponent during a cardio kickboxing class led by Liron Wilson. He said he originally chose the class to fill a space in his schedule, but now he looks forward to it each week. / photo by Jessica Harsen

They warm up with intervals of jumping rope. Pulsing electronic music blasts over the sound system to pump them up—today, it’s Calvin Harris on the iPod. The dance studio at the University of La Verne is filled with students preparing to fight. An alarm goes off, and instructor Liron Wilson yells “Push ups!” He’s a tall, well-built man with a loud, no-nonsense voice. Soon the sets get more intense, with longer workout intervals each time the alarm rings. The students are breathing heavily from exhaustion. Sweat drips from their faces. Their arms shake as they try to keep up with each of the intervals, alternating jumping rope with dropping to the floor for push ups. And this is only the first 15 minutes of class.

American kickboxing is a fusion of martial arts and boxing that started in the early 1970s. It has become a growing workout trend, both nationally and at the University of La Verne. Paul Alvarez, Director of the Athletic Training Education Program says ULV created the class to get students involved in a sport they would enjoy. “We wanted to see what the latest hot trend was … what people are really interested in.” Alvarez says, 11 years ago the class was reserved for step aerobics, during an era when it was a popular form of fitness. The instructor at the time slowly began introducing kicks and punches to the workout. Eventually those kicks and punches superseded the step aerobics moves. And that is when the class became kickboxing. While ULV has had a kickboxing class for many years, Alvarez says the class really transformed four years ago when a new instructor came in to figuratively and literally kick some butt. That man is Liron Wilson, ULV’s current kickboxing instructor. He is a mixed martial artist and alumnus. He began kickboxing ten years ago after many years of playing football and running track. “I needed something to stay active as an adult, and I was taking my certification class at Mt. San Antonio College, and I went to a kickboxing class they had over there, and it all took off from there,” says Liron. Alvarez says Liron took on the course and made it his own. His class makes the sport fun and teaches defense, while helping students build confidence in their own physical abilities.

As the warm up ends, Liron tells his students to pair up and grab their blocking pads. He is about to teach new combinations, a series of synchronized moves. The students watch as he demonstrates a combination involving a jab and a spinning roundhouse kick. Now it is their turn to try it. Smiles and words of encouragement fill the hot and sweaty room. “Nice roundhouse kick right there!” “Keep going! You got this!” The room is full of laughter as the students literally punch and kick each other. Liron encourages them and makes them smile with a joke or two about how much they have improved, calling one student the next Karate Kid. “My (kickboxing) instructors were fun and clowns so I took after them,” says Liron. “College is a stress in life because you have real classes to worry about, and (kickboxing) is more of a stress reliever.” 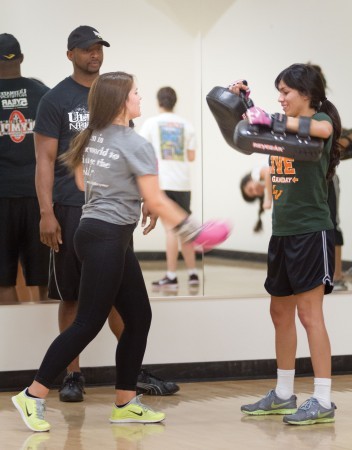 Senior Paige Bradley and sophomore Danielle Garcia learn a new kickboxing combination from instructor Liron Wilson during a Monday evening class. Both students agree that this cardio class is a refreshing break from sitting in a classroom. Garcia is glad the University is investing in their physical health, allowing her to earn a degree while staying in shape. / photo by Jessica Harsen

As Liron teaches the next combination, he asks one of his advanced students, junior kinesiology major Desiree Hernandez, to help demonstrate it in front of the class. Hernandez took taekwondo as a child, and has taken kickbox­­­ing at La Verne for the last three and a half years. Liron asked her to help because she excelled when she first took his class. “I like the whole fighting thing,” says Hernandez. “We have a good instructor. He is funny, and he is good with people.”

As the students learn their new combinations, Liron pairs up with another advanced student, senior psychology major Andrea Madrigal. She is preparing for an upcoming martial arts competition. Madrigal and Liron are circling the room, sparing. Madrigal is throwing jabs and hooks, swinging horizontal punches at a 90 degree angle toward her opponent, as fast as a Rock ‘Em Sock ‘Em Robot. Liron defends himself with his blocking pads. They move together in sync as if they are ballroom dancers.

Liron allows his students to compete in kickboxing competitions as part of their final exam. It began as a rare option for the most advanced students, but it has grown. Most students become interested in the idea after so much hands on training in class. “People started to come to me and asked, ‘Well can I compete, or is there any way we can spar?’ So I tried it in the program,” he says. Alfonso Moreno, a senior kinesiology major and current kickboxing student, says he hopes to be able to compete someday. “I feel like he prepares you well enough to where you can get into a ring situation and handle your own,” says Moreno. The class also teaches self-defense. Liron wants his students to know how to protect themselves if ever the situation arises. “I do put some real aspects of fighting into the classes with the combinations on the pads and the angles and situations, so they can take something away from it,” he says.

As the time goes by, the atmosphere in the class has changed. The students have submerged themselves into the workout, found their confidence, and assumed the role of true kickboxers. They are no longer the students who were panting during the first 15 minutes of class. The paired partners have synchronized as they move through the various kickboxing combinations. One person calls out a series of combination numbers for their partner to perform. Liron looks at two of his students as they begin to improvise some new combinations. He is impressed with what he sees, and with a smile and nod, he encourages them to continue what they have created.

Jab
A straight punch across toward an opponent.

Spinning Roundhouse Kick
When the front foot steps forward, the body spins in a complete circle, and the back foot comes up to strike an opponent.

Hook
A swinging horizontal punch at a 90 degree angle toward an opponent.

Spar
A scrimmage or match.

Combination
A series of synchronized moves. 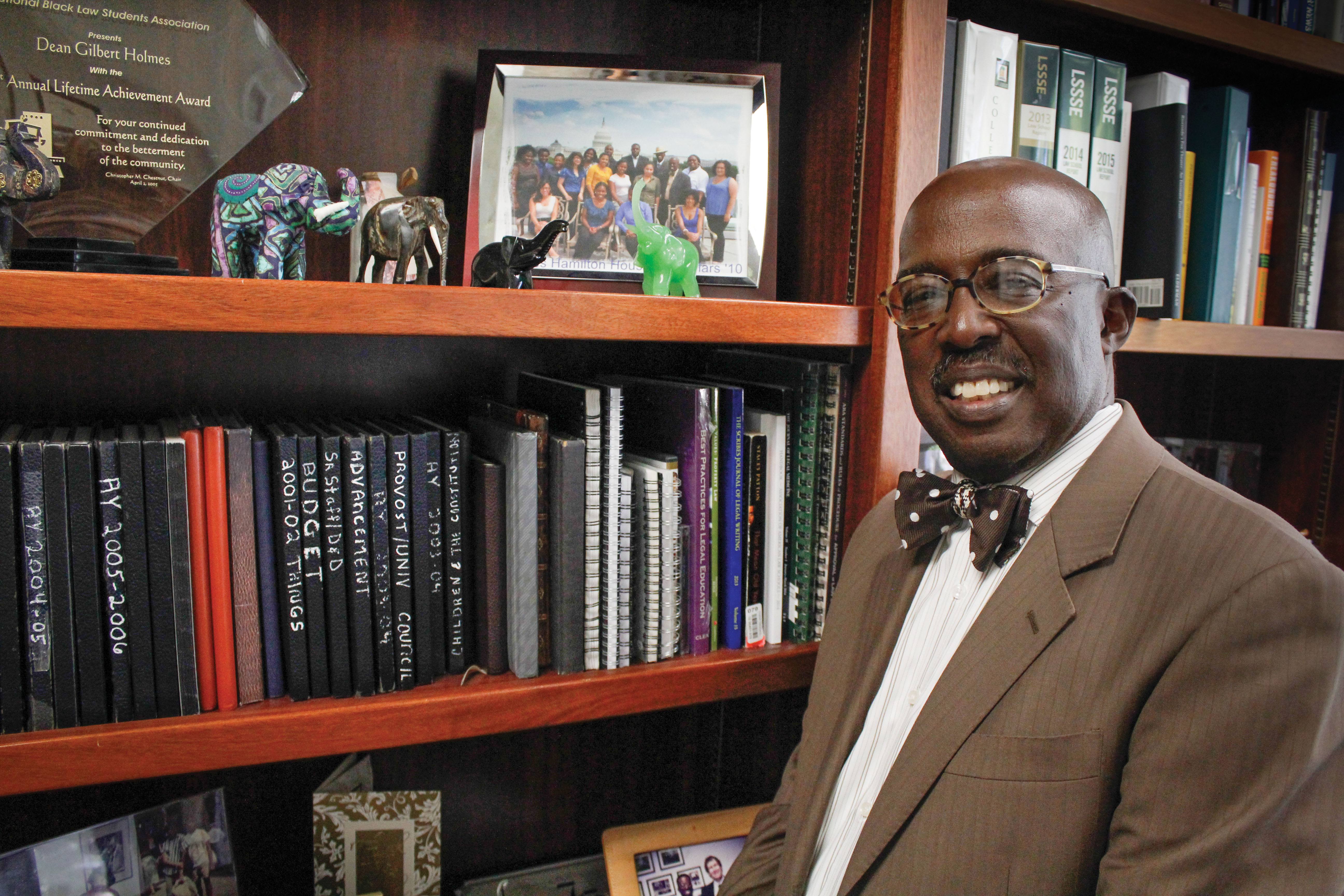 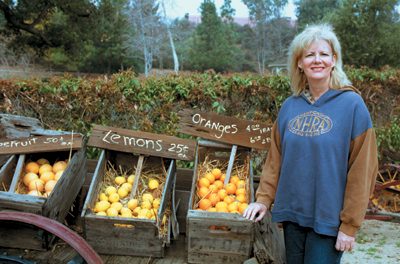 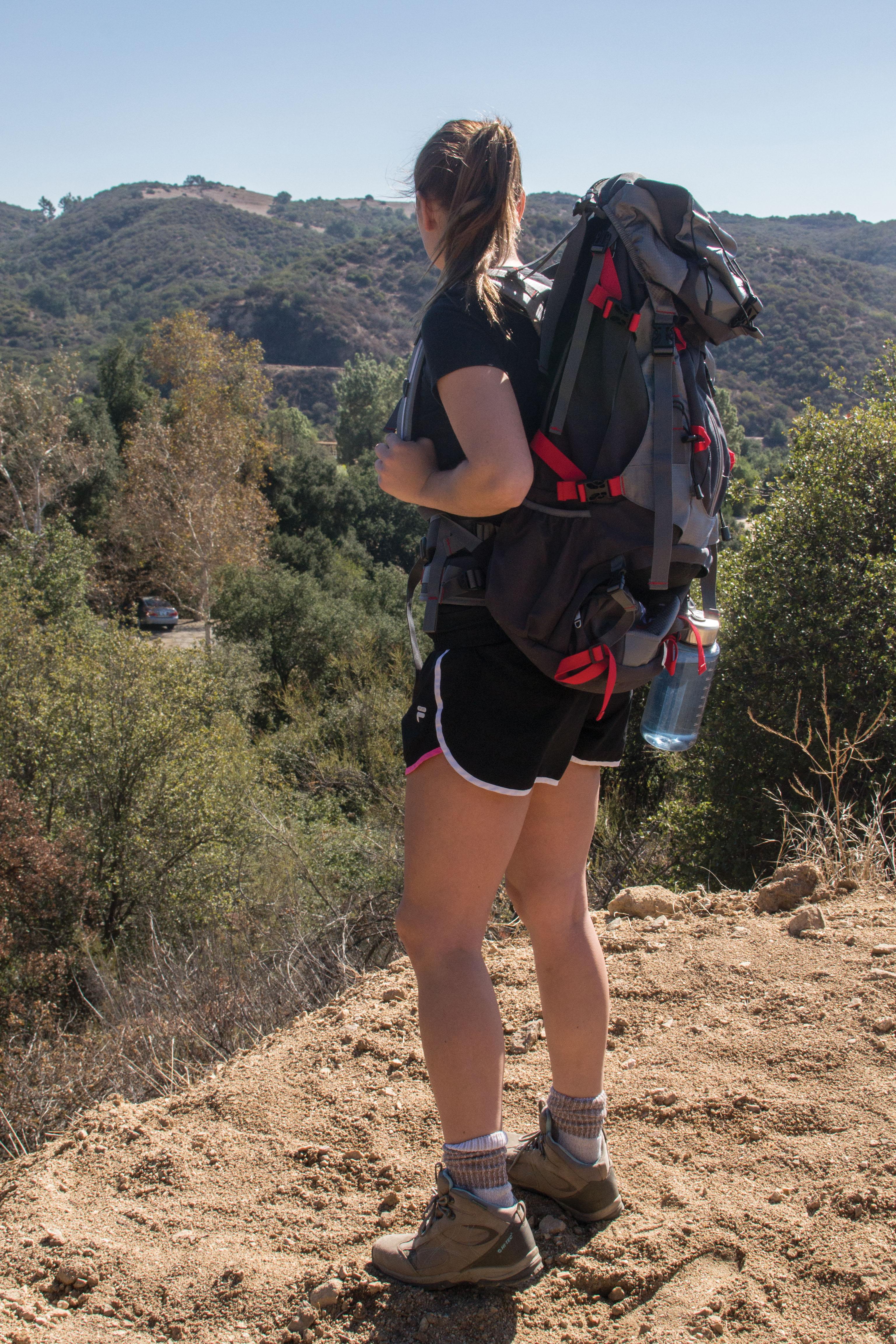