The modern way to socialize and exercise 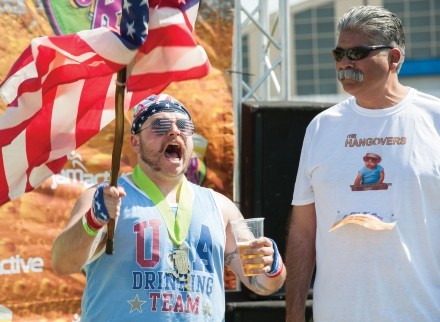 After the runners completed the Tap ‘n’ Run race, they competed in many silly competitions, including some that tested their belching and dancing skills. Travis Humble and Mitchell Vallejos square off in the contest for “Best Moustache.” When it was all said and done, Vallejos got the win and the prize, a custom beer mug. / photo by Hunter Cole

They walked through the tunnel toward the track, ready to run. Most wore ridiculous costumes—superheroes, nuns, hula girls. Others wore tiaras, tutus and moustaches. It was just another Saturday at the Fairplex in Pomona. The venue typically plays host to running events throughout the year, including wacky fun runs. On this day, runners were participating in the Tap ‘N’ Run, a fun run that combines running with beer drinking. Sports marketing firm Jam Active created the event in 2011, and has brought it to major cities all across the country, from Las Vegas to Jacksonville, Fla.

At Southern California’s Tap ‘N’ Run, LMFAO soared through the speakers as the crowd headed toward the starting line. Runners drank one small tumbler of beer and dashed off the starting line after an enthusiastic countdown. As participants ran the 2.5 mile race, they drank two more beers at re-filling posts spaced along the course. Once they crossed the finish line, they celebrated with one final beer. “I enjoy fun runs because it brings people together as a group to have active fun,” said Janice Hannah, a participant from Buena Park. As the last few runners crossed the finish line, the party was just getting started. Contests, drinking, eating and an endless upbeat playlist kept the good vibes alive as participants gathered together to celebrate their tasteful run. “This run is perfect—not too loud, plenty of people, great weather and well organized,” said Norma Avalos, a Huntington Park participant.

Runners stood in front of Tap ‘N’ Run back drops as they posed for silly photos with their one-of-a-kind Tap ‘N’ Run medal, which doubles as a bottle opener. Soon they would post those photos to Facebook, Instagram and Twitter using the TapLA hashtag. Within hours, a group of strangers became a community of buddies who were simultaneously promoting the event to friends in their social networks—people who might consider the Tap ‘N’ Run next year or any fun run for that matter.

You cannot talk about fun runs without talking about the rise of social media. Both things have grown exponentially over the past ten years. Wild, colorful photos from fun runs have become a mainstay on sites like Facebook, catching the eyes of non-runners and convincing many to try one. That has created a viral effect, as more and more people have joined the fun run culture, and embraced this new form of running. These events seem to offer something for everyone.

Mud Runs put participants through a mud-soaked obstacle course. In Color Runs, runners wear white t-shirts and are sprayed with bright color powder as they dash across the course. This concept has been adapted at night, and re-named Black Light Runs, with neon glow-in-the-dark powder showering runners at every marker. Other fun runs are food-focused, challenging participants to eat at specific mile markers. There is the Krispy Kreme Challenge, the Twinkie Run 5k, the New York Hot Dog Challenge, and the Hot Chocolate Run, a favorite of cocoa lovers. Other fun runs are geared toward theatrics, such as the Zombie Run, which is part race, part haunted house. Some colleges around the country even sponsor Undie Runs, where students disrobe and run in their underwear. Other fun runs add an altruistic element to the mix, putting the focus on giving back by partnering with charities to raise money. 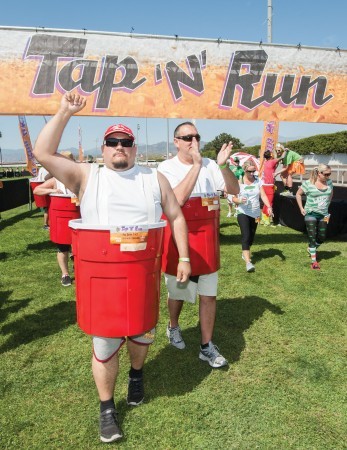 Suzanne Villegas, an event sales account executive at Fairplex says fun runs have become so popular that Fairplex typically hosts at least one per month. Past events there include the Color Vibe, Graffiti Run and the Run or Die. “We have over 500 acres of different types of terrain. We have flat, we have hills, we have a track. We can accommodate all,” said Villegas.

Jeff Galloway, American Olympian and prominent running expert says fun runs have helped promote the sport of running. “It’s growing at the rate of 15 percent to 20 percent every year,” he estimates. Galloway says fun runs have created a gateway to the more serious sport of running, introducing people to the thrill of crossing the finish line. Some people who first participate in a fun run eventually try a full or half marathon. Galloway attributes the success of fun runs to today’s generation of runners. He says, this new generation of young adults is not as competitive about running. Unlike past generations, today’s young runners care less about coming in first, Galloway says. They also see these events as opportunities to give back, and are drawn to races that support charity.

While Galloway is a marathon runner, he too has participated in many fun runs over the years. One of his favorites is the Disney World Princess Marathon, where he and his wife once dressed up as pirates. “It was just a whole lot of fun, which made it so memorable,” he said. Galloway stresses proper training, even for a short, silly run. He advocates a “Run-Walk-Run” method, which he created to help even the most inexperienced participants accomplish their goals, whether it is a 5k or a full marathon.

Back at the Tap ‘N’ Run, many runners said they trained more to drink than to run. “I had plenty of beer training to increase my tolerance,” joked Gladis Lindo, a Los Angeles participant. Other people said they train for runs that span longer than five kilometers. No matter the distance, the fulfillment of conquering a run at any age with a wacky theme is what participants say keeps them coming back. And if they want to return to the Tap ‘N’ Run, they will be welcome.

Before the event ended, organizers from Jam Active told the crowd that the Tap ‘N’ Run would be back in Pomona next year. Fairplex says it will be ready, mug in hand. 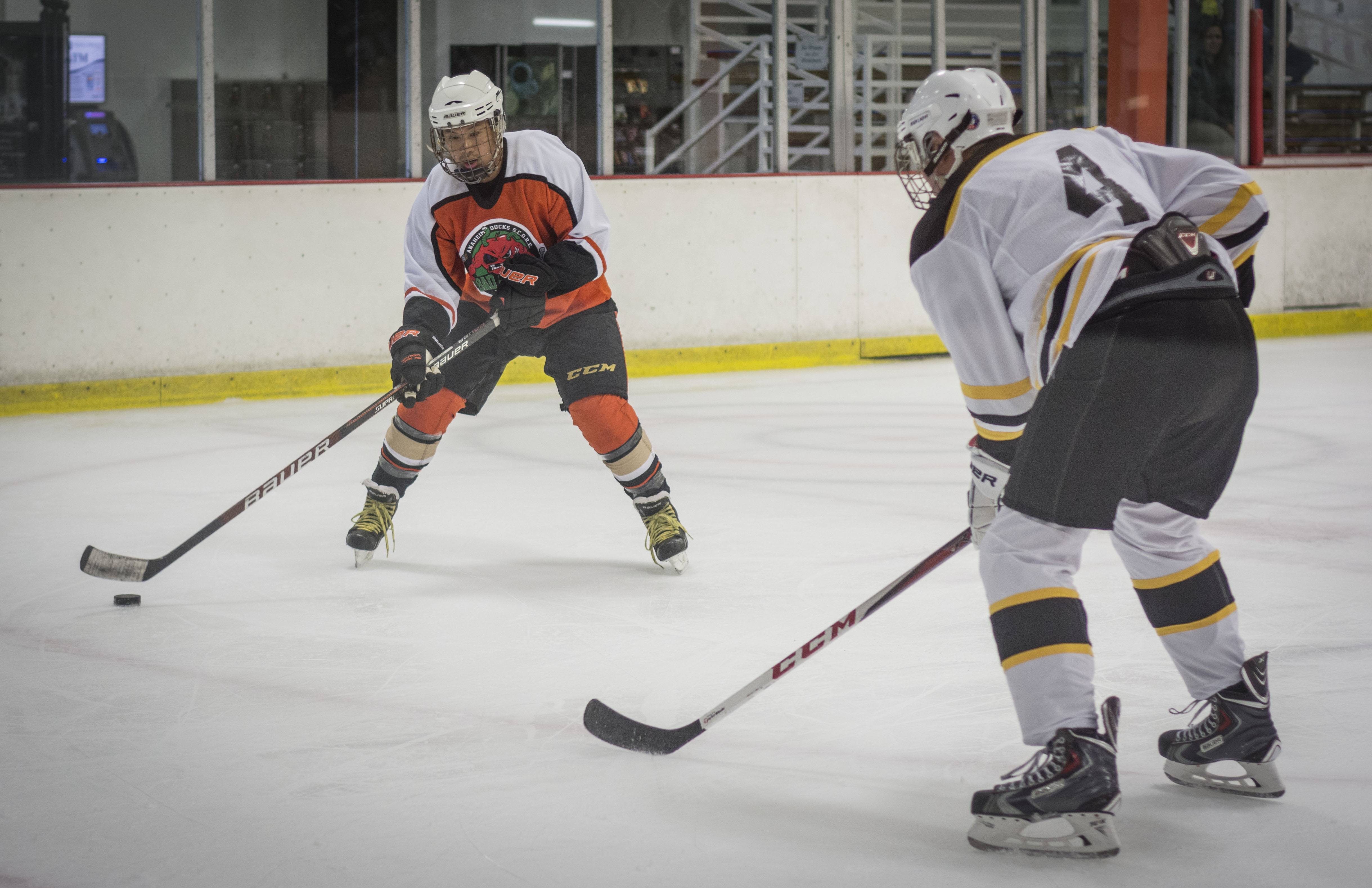 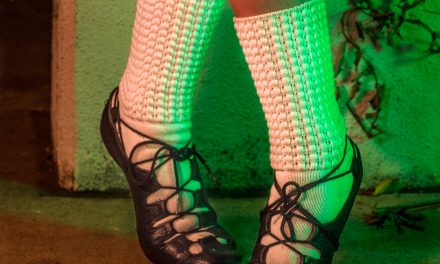