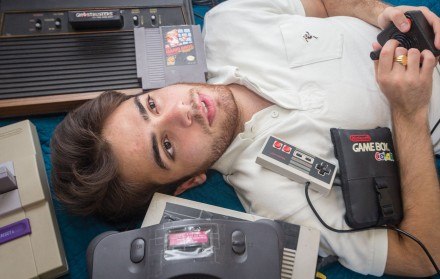 With the desire to have his belongings close by, Albert Khalbourji keeps the majority of his vintage video game collection in his University of La Verne Vista dorm room. His video game platforms range from the Nintendo 64 to the Gameboy Color. / photo by Amanda Duvall

Albert Khalbourji sits in front of the University of La Verne Campus Center; his MacBook Pro on a table as he makes edits to the latest game he designed for the App Store. A six-string guitar rests on his lap. Albert wears cuffed jeans from the thrift store with his brand new white iPhone 6 sticking out of his back pocket. His face lights up with enthusiasm as his eyes, cloaked behind his classic Ray-Ban Clubmasters, dance while scanning the screen. “Solar Space” is his game, his invention, and he has just discovered a way to make it glitch free. He explains that “Solar Space” currently faces a programming obstacle, so he is making edits to the game that he will later resubmit to Apple for updating. When it comes to gaming, Albert prefers holding the controls on the design. “I want people to just pick it up and shoot and see who scores the highest. That is when games are the most fun, when they are simple.”

He is self-taught on the development of game applications and uses GameSalad, a game design software. “Everyone thinks I’m a genius with the developing, but I don’t know a lot of code. I know enough code to make a small program, but I really struggle with it. It’s like learning a different language.” Using GameSalad, Albert draws the characters for a game and then applies movement to them, which usually takes him about an hour. “The process was really simple after I read a lot and watched a lot of YouTube videos.”

After the basic programming is done, it is time to make music. Albert, a music major at the University of La Verne, is passionate about making and playing “groovy tunes.” His favorite place to compose music is under the oak trees at the Johnson Family Plaza. He enhances his musical talent with inspiration from his La Verne music classes—primarily guitar ensemble and song writing. “He’s like from the ‘60s; he could have been born in that time. And he even looks like it,” says Michael Ryan, guitar ensemble professor and music department associate. “There is something about the way he holds his guitar, and it just feels like he’s right out of Greenwich Village right at the early days of the beginning of the folk era.”

Albert makes all of the music for his games using the GarageBand App on his laptop. “That’s the fun part,” he says, with a big grin gracing his face. Reaching over the guitar always on his lap, he grabs his iPhone to play music from another one of his games, “Whack Attack.” “There’s a lot of cowbell on this one,” he says, rocking out to his own beats. “Isn’t it groovy?” The music for the games has a funky underlying beat reminiscent of the 1970s, showing off Albert’s old-meets-new approach to app design. “He is an old man from the ‘60s wrapped in a teenager’s body in 2014,” echoes Tyler Bertao, junior communications major and Albert’s close friend.

When the music is finished, and the game is ready to go, Albert sends the final product to Apple for review. A week later, Apple sends him feedback. If corrections are needed, he makes them and sends back the updated game with fingers crossed. Once approved, the game is available for billions of users across the globe to download from the App Store with the click of a button.

Personally, Albert does not just like his video games in app form. He has been playing video games since he was 4 years old. He even collects old games and consoles in yet another mix of old and new—much like himself. So far, he has collected more than 50 Atari games including his favorites like “Asteroids,” “Frogger,” “Pac Man” and “Space Invaders,” all hailing from the ‘80s and ‘90s. From Playstation 1, Nintendo 64 and Sega Genesis from the 1990s to Atari 2600, which originally came out in 1977, Albert loves his games to be old school. 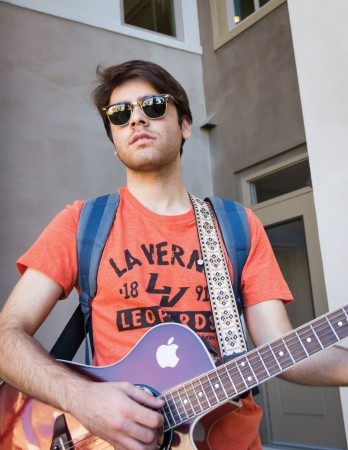 Being a music major has a great effect on the app-making process for Albert Khalbourji. He writes much of the music he uses in the apps he creates, composing the songs on his always close guitar or sometimes on the piano or harmonica. / photo by Amanda Duvall

In 2012, he created the game “Whack Attack,” which was inspired by the classic arcade 1976 game “Whac-A-Mole.” It has more than 1,500 downloads. In “Whac-A-Mole,” the player is challenged to hit a multitude of moles that pop out of the ground before they sink back beneath the surface. Similarly, in “Whack Attack,” little yellow faces pop out of the ground, and the player must quickly touch them on the smartphone screen. “Solar Space,” Albert’s fourth game to date (“Catch!!!” and “Space Intruders“ came earlier), launched on the App Store last August and has been downloaded more than 150 times. “Space Invaders,” one of his favorite Atari games, inspired the game. “Solar Space” features a space ship that flies across a star-spotted screen, and game players use the ship to shoot down meteors.

Albert’s inspiration to build games did not come just from helping Frogger cross the street safely, but also from his love for the Apple brand. “I just love Apple, dude. Steve Jobs kind of created a religion in 1976; they are just changing the world every couple of years,” Albert says.  It was the purchase of his first MacBook at age 13 that inspired him to start designing games. “It was literally an obsession when I first started out,” Albert waxes poetically, eyes wide and amazed by the design of iPhones. He does not even like to put a case on his iPhone 6 (which he purchased the day it was released); it takes away from the design, he says.

It follows that he was hired to work at MacMall right after his high school senior year. MacMall is a retail store for Apple products and has classes for people to come learn how to use their technology. Albert worked as an instructor helping technology challenged folks learn how to do simple things like zoom with their iPhone’s camera. “I love helping people out and seeing the result on their face when something starts to work,” he says.

Albert developed a passion for Apple as he watched videos of Steve Jobs’ presentations on YouTube. “He always would bring out the beauty in even the smallest things that other people don’t account for,” he says. Albert’s idolization of Steve Jobs led him to kick start the Apple Developers Club during his senior year at Peninsula High School in his Palos Verdes, California hometown. The Club developed an app for the high school, making daily bulletins and teacher contact info available to students. They raised funds selling iPhone cases at the school’s club fair.

But Albert does not use this same money making strategy when selling his games—his apps are free. He generates money from them through Apple’s iAds during gameplay.

“To be honest, I would say I’ve only made $100, because I want to make everything free to get more people to download it,” he says. “My apps were never for the money. I do it because the best thing is seeing people play my app.” And that is what people do—some even beat his scores. “One of my friend’s friends beat me, so I kind of suck at my own game,” he says. “I need to work on that.”

Closing his laptop, finished with his edits on “Solar Space” for now, his meditative thoughts are already focusing in on his next app, which will be designed around playing guitar chords. He picks up his guitar and starts strumming The Beatles’ “Here Comes the Sun” as he walks back to his dorm. 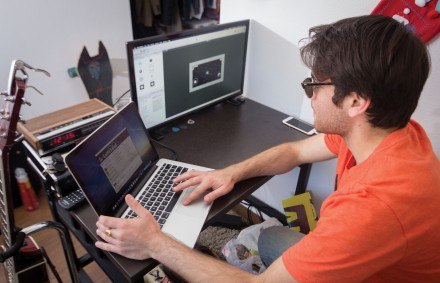 Albert Khalbourji, a University of La Verne music major, has been inspired since age 13 to create vintage-style games for the App Store. He uses the software GameSalad to create his games, one of them being “Solar Space,” inspired by the classic video game “Space Invaders.” / photo by Amanda Duvall 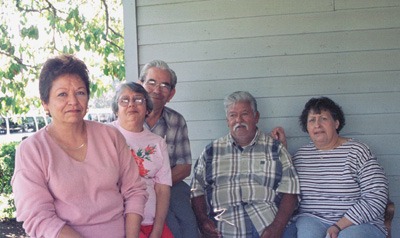 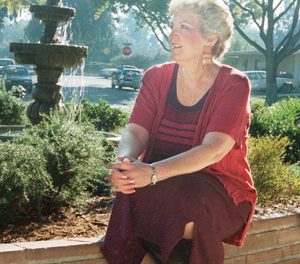 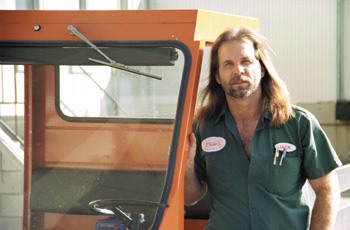 ULV Employees: From Four Who Care