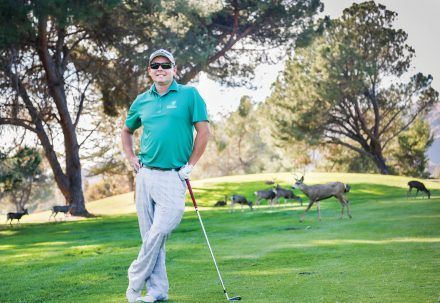 Kenny Murray, Marshall Canyon Golf Course manager and golf professional, says the golf course is the deer’s home. Many of the deer tend to gather in the trees near Hole 4 where they find shade from the relentless California sun. / photo by Megan Peralez

Golf balls, golf clubs, golf carts – and deer? That is right. At Marshall Canyon Golf Course, deer are a big part of the golfing experience. “It’s like their home,” Golf Pro and manager Kenny Murray says. “They come down and do their thing here.” Murray has been a golf pro at Marshall Canyon for about 10 years, but has been golfing here since he was a child. He says he remembers the deer always being there while he was growing up. “Everybody is pretty cool with them. It’s a beautiful place.”

For those who are not regular golfers, deer at a golf course may seem unusual. However, Jeff Burkhart, professor of biology at the University of La Verne, suggests this may not be so out of the ordinary. “Golf courses are great areas to see them in. There’s scattered trees, there’s places for them to hide, there’s food; they’re protected from predators. So it’s not atypical to see them in golf courses.” According to Burkhart, the deer are black tails, a sub-species of the mule deer. They are native to the western half of the United States and their region extends all the way up to the western side of Canada. “They tend to mostly live or be active in areas where you have an overlap between forests and open areas.” Burkhart says the chaparral around Marshall Canyon is a good place for them, but he thinks they probably spend more time down at the course because it has been so dry, and golf courses are watered; the vegetation around them that is not grass tends to be more luxuriant, meaning there is better food.

The deer’s main predator would be a mountain lion. “If another animal finds a fawn, they might be able to kill it if they want to kill it, but there’s no other animal besides humans, and, you know, there’s deer season,” Burkhart says. One time Murray had someone who had seen the deer ask him whether they could hunt them. “I had this one guy who asked, ‘Can we hunt up here?’ Really? No, man, it’s illegal.” Despite mountain lions being the main predator, there have been cases where other animals have interacted with the deer, like when Pro Shop Manager Dustin Miller saw a bear chasing a deer a few years ago. There have been funny cases as well. Seth Miller, an employee at the Pro Shop, once saw a coyote being chased by a herd of deer. “I guess the coyote was trying to mess with the kids, and the deer ganged up on him and chased him,” he says. 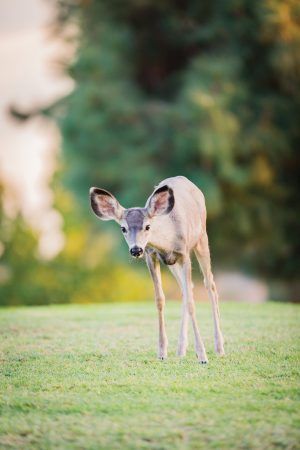 The deer at Marshall Canyon Golf Course are black tails, a sub-species of the mule deer, known for their mule-sized ears. Their ears provide them with excellent hearing that goes along with their incredible sense of smell and eyesight. / photo by Megan Peralez

Deer are such a cherished part of Marshall Canyon that the golf course emblem is of a buck. Newcomers, children and even long-time members enjoy having them around. For Damian Clark, a regular at Marshall Canyon Golf Course, this could not be more true. “There are days when you come up and, oh, there are three or four of them, and then there are six. Then you really stop and look and see them all over the place. They are just amazing. The babies today were all under the shade trees. It’s just so peaceful and enjoyable to see them.” The best time to see the deer is during the early morning and late afternoon. Burkhart says the deer usually sleep during the day and at night.

What separates these deer from the white tail deer of the eastern part of the United States, he says, are the way they move. “You can tell the difference by how they run. Our deer here hop; it’s like a bouncy ball. They bounce along. The white tail deer has a rocking horse kind of gallop. You see the two of them moving; they’re very distinctive.” Another mark of distinction are the antlers. Typically the antlers of the black tail deer tend to fork evenly. For the white tail deer, the antlers point forward. But if one is looking at a Marshall Canyon deer named “Marshall,” then one of his antlers points down, curving in front of his face, and it never falls off. Marshall is the resident favorite, oddball deer—the one everyone references when asked about the animals. “Marshall the Deer, that’s my favorite deer,” says Eddie Ottaway from Upland. Ottaway has been coming to this golf course regularly for the past year. “Part of the reason I come to this course is the wildlife here. They’re very majestic animals.” Burkhart says abnormal antler growth, like on “Marshall,” is pretty common. He says when the antler grows, it is soft and delicate, and an injury could have caused the abnormal growth, or it could be a genetic defect, like multi-branch antlers. Typically, the deer lose their antlers during the winter after mating season when they fight other bucks for does, and they regrow them in the spring. Except, of course, for Marshall.

Murray has played at Sierra La Verne, a nearby private golf course, and says he has never seen a deer there. “This is more convenient for them because they’ve got the canyon right here. Sierra La Verne is more residential.” Murray says at Marshall Canyon, they try not to interfere with the deer since he feels the golf course is part of their habitat. This sentiment extends to protocol for when they come across injured deer. “You see a lot of injured deer up here. It’s nature. There are a lot of coyotes, mountain lions, bob cats. I saw two bob cats the other day with a baby; it was kind of cool.” 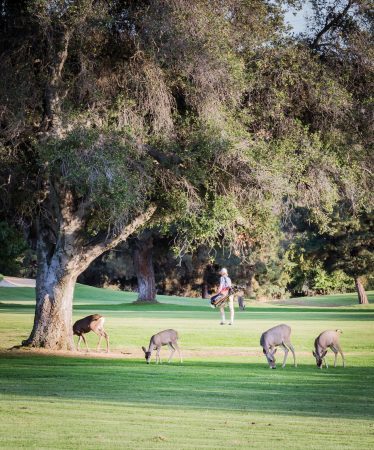 It is common for golfers to walk amongst deer grazing throughout Marshall Canyon Golf Course. Golfers often encourage the deer to move to another grazing area in order to play their round. / photo by Megan Peralez

Having deer in their golf course is not always fun and games. In October, they found a deer with an arrow in its neck, the victim of an illegal hunt, and called the Humane Society and police. “The Humane Society came, but said they couldn’t do anything,” says Golf Pro Bruce Thompson. “The next day, I saw him, and he was walking around with the arrow in him, but I haven’t seen him since. I’m thinking he died. Somebody shot Bambi.” Bambi, in this case, was actually a buck. Murray adds that he has not seen something like that in 10 years.

Those who work at the golf course have seen carcasses though. Maintenance workers like Rigoberto Alvarado deal with that first hand early in the morning. He says he disposes of them in the canyon to let nature run its course before the public arrives. “People don’t see that,” Alvarado says, but he adds that some players have come across carcasses. On this course, that is part of nature, and besides that, the deer seem to be just fine where they are. “If they get hit by a golf ball, it happens,” Murray says. Players will sometimes try to herd the deer away by approaching them. Most of the time, they just play around the deer. There are no official rules with how to deal with the animals. But Murray’s five unwritten rules are “don’t touch them, don’t try to pet them, don’t hit them, don’t kill them, and don’t take them home”—five great rules for a round of golf at a course where the deer experience is part of making par.

“This place really is like a sanctuary,” says Nils Sundberg, a golfing regular for the past four years, while watching three deer graze from a distance. 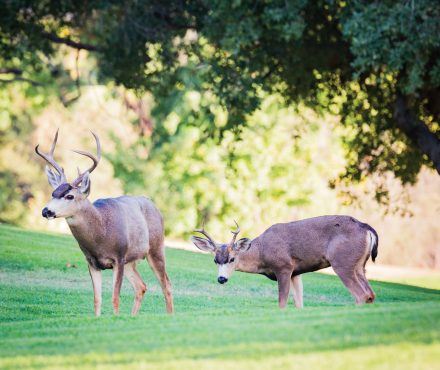 The average adult male black tail, a sub-species of the mule deer, weighs 200 pounds. Males regrow antlers immediately after they shed ones from the prior year. As the antler grows, it bifurcates or branches out from a single stem. The new antlers progressively grow larger each year. / photo by Megan Peralez 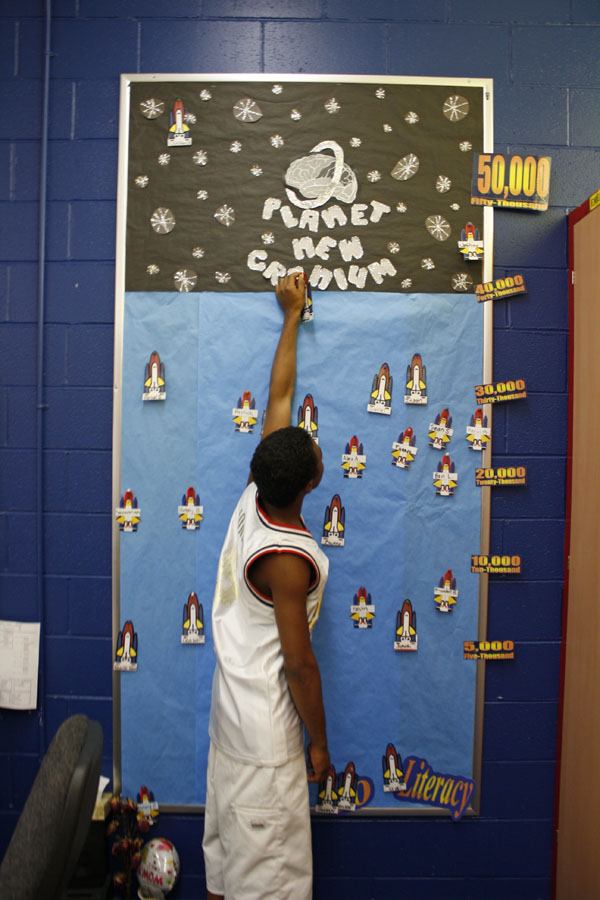