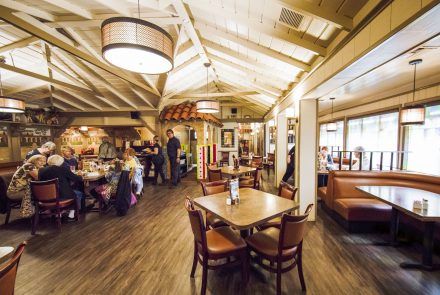 Wrought-iron rods protect the colorful stained-glass windows at La Paloma Mexican Restaurant against more than 50 years of history. Prickly cacti seem to guard the edges of the parking lot and mark the passage of time as they slowly grow taller than the sign for Williams Avenue. Decades of family values have established La Paloma as a classic restaurant on Foothill Boulevard, just inside La Verne’s city limit. Its story, however, began nearly a century ago under a completely different name.

Decades ago, the restaurant was called “Wilson’s,” a sought-after diner on historic Route 66. In historic photographs, Model A Fords lined the street in front of the restaurant. The land and restaurant were then owned by the Wilson family. The building was nestled in a multi-acre orange grove managed by Kinsey Roberts, whose home was famous for its sentinel oak trees that are believed to be the same ones on the property today. In the late 1920s, Roberts sold part of his land to recently relocated former Washington state residents Harry Dwight Wilson and his wife Cora Belle, according to Bill Lemon, La Verne resident and vice president of the La Verne Historical Society. 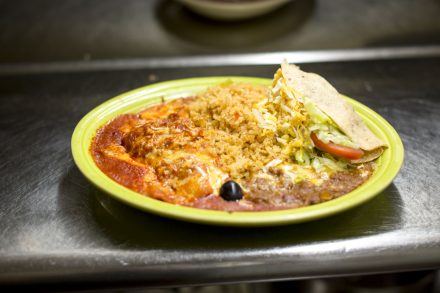 Rice and beans blend harmoniously between rich enchilada sauce and the lettuce of the chicken taco in one of La Paloma’s many combination plate options./ photo by Taylor Griffith

Harry was born in Ohio in 1876; prior to World War I, he worked as a foreman for Cold Storage Plant in Washington state, as listed on his draft registration card. Harry and Cora were married in 1911 when he was 35, 10 years her senior. It was a trend for grove owners to sell their goods at fruit stands on their property, Bill says. The Wilsons followed this trend and continued to run Robert’s original fruit stand, which they renamed “Wilson’s Fruit Stand” and advertised fresh fruit for sale on Route 66. Cora began to make breakfast for farm workers. Her endeavor brought such good business that she and Harry officially opened Wilson’s Sandwiches in 1930, according to a La Verne Community News article authored by Galen Beery, January 2010. Eventually, Wilson’s Sandwiches evolved into Wilson’s Dinner House, which became host to larger gatherings and receptions. “In reading my own family history, my aunt was taken to the Wilson’s diner for a birthday,” Bill says. Other area residents recall wedding receptions being held at the diner. It was the go-to place for memorable dinner parties. 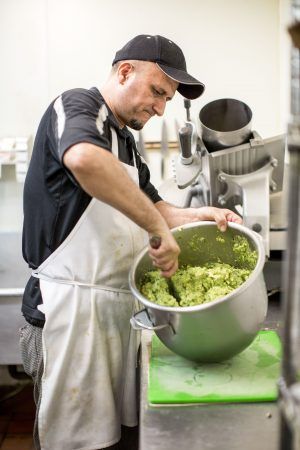 Benie Tapia hand mixes a bowl of avocado into guacamole, a La Paloma staple. Guacamole is usually paired with tacos and tostadas. / photo by Taylor Griffith

Bill shows an 80-year-old match book that says, “Wilson’s steaks, dinners, sandwiches.” Dialing “1981” would ring the couple at their Williams Avenue and Foothill Boulevard location. The flip side of the Crown matchbook reads, “Wilson’s Fruit Market—oranges, grapefruit, avocados and other fruit packed to order.” The 1940 U.S. Census reveals that Harry, officially known as owner and manager of the Wilson’s Dinner House, had a fifth-grade education, while Cora, his wife and assistant manager, completed high school. A family portrait shows the Wilsons may have been wealthy as they donned formal attire that included watch chains and large brimmed hats. They were reported as earning $1,500 each from their restaurant. The median income for a man in 1940 was $1,368. Harry died In October 1945. Cora followed in 1959. There is no record that they had any children. While the exact details of what occurred between Cora’s death and the end of Wilson’s is still a mystery, the building was ultimately left vacant until 1966. Then, more than 30 years after Wilson’s Sandwiches opened, the original building became La Paloma’s east dining room. Today, Robert’s Live Oak trees and Wilson’s original stained-glass windows still remind patrons of the history that once unfolded on historic Route 66. Although the food has changed, the value of family is still instilled in the property.

Joe and Hortensia Parker opened La Paloma, the Spanish word for “the dove,” in 1966. Hortensia worked in the restaurant business all her life; her mother started the original La Paloma in Flagstaff, Arizona in the 1940s. Shortly later, she moved to San Bernardino and opened a fresh flour and corn tortilla shop. Later, when Joe transitioned from his construction job, the Parkers outright purchased their shop. The couple expanded the successful business throughout San Bernardino until an acquaintance suggested they visit the La Verne property and consider opening a restaurant. It was advice they followed; they renovated the historic brick building into La Verne’s La Paloma Restaurant.

Cindy Zajicek remembers keenly the hard work and love her parents Joe and Hortensia put into La Paloma’s success. As a child, she and her siblings would fall asleep in the empty booths while her parents worked long evenings. Since her mother’s 2002 passing, La Paloma has remained under the careful eye of one of her brothers, Joe William Jr., until she took complete ownership in 2013. “It fell into my path,” Cindy says. “I tried working at department stores and banks, and then my dad got sick. I started doing the book-keeping.” During her breaks between classes at California Polytechnic University of Pomona, she would stop by and manage the books for her parents. While she says she did not spend the majority of her childhood in the family restaurant, today she invests six days a week upholding her family’s traditions through food. “If something goes wrong, I’m the one they call.” Laws are more strict than when her parents were owners, Cindy says. Complex taxes and accounting practices, increased prices for groceries, stringent health standards, more rigid building regulations and higher wages for employees have made her job challenging. For Cindy, though, cultivating a familiar, friendly environment with the staff she has known since she was a child is her primary mission. 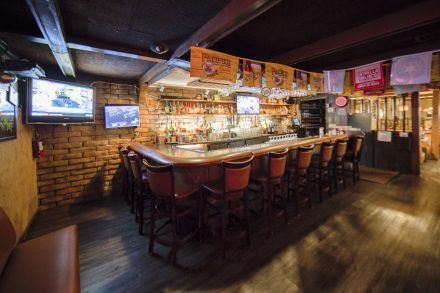 La Paloma’s Cantina serves refreshments, including the Mango Inferno Margarita, a twist on a classic margarita mixed with chamoy and tajin. / photo by Taylor Griffith

When 63-year-old Marsha Felix first moved to Pomona in 1964, her bus would stop just down the street from the abandoned building that would become La Paloma. “I used to shiver. It looked like a haunted little place. Now, I’ve spent more than half my life here,” Marsha says. She was just 16 when she started working as a waitress and joined the La Paloma family, along with several other employees who still work there today. Her current manager Cindy was only in sixth grade. While her husband looks forward to retirement, Marsha says she still enjoys every day and plans to stay until she reaches 50 years of employment. To date she is at 47 years and counting. While she says her sister made more money as a banker, Marsha says her coworkers and customers have kept her around all these years. “It’s like coming to see family,” she says. “Customers will ask me, ‘What’s the name of your perfume,’ and I’ll say, ‘By the end of the day, it’s taco.’”

Working at La Paloma is a pleasure for Marsha, as she relates having served generations of guests. She recalls a family stopped by with a newborn baby boy. Years later, the baby returned as a toddler and asked for “Marsha’s restaurant.” Moments like these have solidified her experience, making her 47 years as a member of the La Paloma family completely worthwhile, she says. 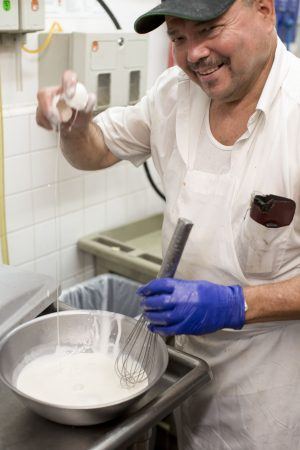 Former busser and waiter Jason Cooper worked at La Paloma during the last three years of his undergraduate education at the University of La Verne. For Jason, his time with the La Paloma family taught him to appreciate the food service industry at a “quintessential California restaurant.” His former coworkers ensured a quality experience for customers through what Jason calls, “an old-school way of service.” When the longtime La Paloma employees trained him to become a server a year into his job, they instilled the same values in him that they abided by: hard-work, great table-side conversations with customers, and attention to detail for a customer’s needs. This meant remembering names of regulars and even sometimes knowing to bring someone their go-to drink as soon as they were seated. “It wasn’t just about putting plates on the table,” Jason says. “For a lot of people, it was their first introduction to Mexican culture.” Today, he leads at the Anaheim Ducks Hockey as fan development marketing manager. Jason credits his serving experience with shaping his time management and communication abilities as a journalist.

Little has changed at La Paloma since Cindy’s parents were managers, with the exception of added menu items including customer favorites pollo diablo, a spicy chicken dish layered in chipotle sauce, and the spinach mushroom enchiladas, a meatless entree stuffed with cheese and water chestnuts. Cindy monitors current Mexican food trends and incorporates new ideas as restaurant specials. “My parents would have thought, ‘What is this,’” Cindy laughs. However, most of La Paloma’s dishes are staples she remembers as a child, like the cheese enchiladas and ground beef taco. “I’m a simple person. That’s what I grew up eating,” she says smiling. Although the menu has changed a bit, the restaurant’s values have not. “We have that down-home feeling. You come in, and we treat you as family. We want you to have a good experience.” One day, Cindy hopes her son and current assistant manager Brian will replace her as the general manager and owner to continue their family’s tradition of serving a personal experience with every meal.

Modern BMWs, Toyotas and Fords now fill the space where 1930 Model A’s once parked and orange groves once thrived. While the city around it has developed, La Paloma continues to be a cozy escape into La Verne’s past. 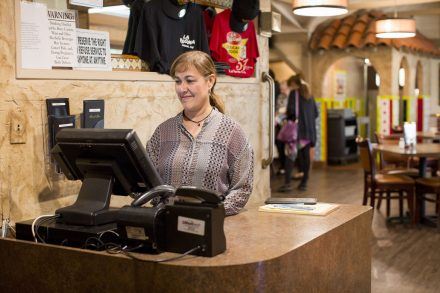 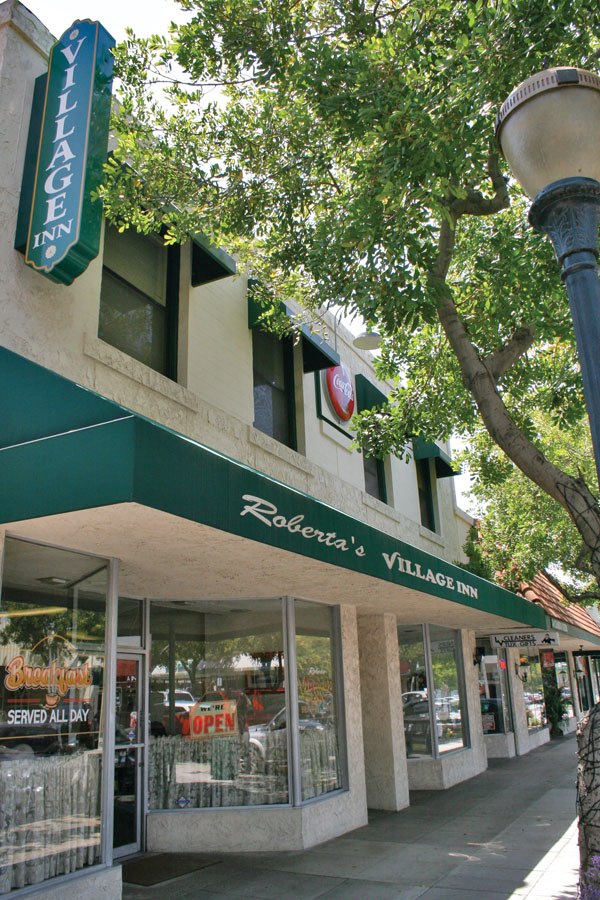 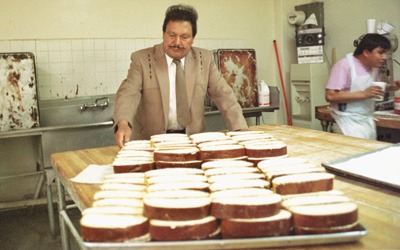