The San Antonio Dam stretches across the mouth of the canyon. The filling basin can hold 9,285 acre feet of water and is flanked by Shin Road to the east and Mt. Baldy Road to the west. / photo by Spencer Croce

The San Antonio Dam, the gateway to the Mt. Baldy wilderness, is an imposing, 160 foot tall, 3,850 foot long barrier that is initially unimpressive. Stretching just under three-quarters of a mile across San Antonio Canyon, the dam stands as a physical bulwark against a threat few living souls remember. In the late winter of 1938, Southern California was rocked by the worst flooding disaster in its recorded history. Two converging storm systems dumped a blanket of snow on the San Gabriel Mountains, and a succeeding warm storm immediately melted it in a deluge of biblical proportions. The resulting flooding left a path of devastation that began in the San Gabriel Mountain foothills and ended at the Pacific Ocean. It stretched from San Bernardino to downtown Los Angeles across multiple river systems. Claremont was flooded. A road project up Azusa Canyon to Wrightwood was completely washed out. Mt. Baldy Village was essentially washed away. 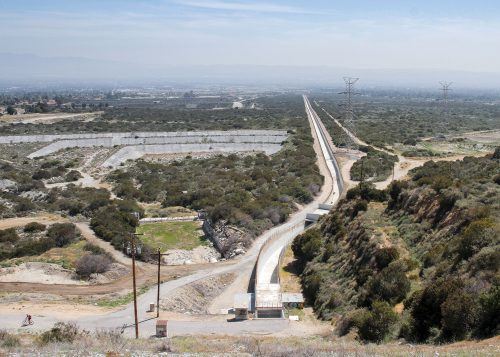 The San Antonio Creek channel runs from the base of San Antonio Dam and eventually merges with Chino Creek, which fills the basin of Prado Dam. / photo by Spencer Croce

In response to this disaster, the Army Corps of Engineers was tasked to build the San Antonio Dam at the mouth of San Antonio Canyon. Built from earth and rock, the massive dam—construction started in 1953 and ended in 1955—cost $7.6 million and holds a concrete spillway on its western end. Three hydraulically controlled gates sit at the dam base to control water flow from the dam’s basin, which is released into the concrete lined San Antonio Creek Channel and empties into Prado Dam—another Army Corps of Engineers project. Despite being built of earth, with an asphalt roadway on its top, the dam requires continued maintenance and upkeep. To monitor its health and signs of erosion, workers spray weed killer on the steep slopes. According to Robert Espalin, dam operator lead man, who has worked for the Army Corps of Engineers since 1991, San Antonio Dam has never “gone spillway” in its 62 years of operation. If it ever did, though, “it would be really bad,” he says, pointing to the slough of new housing and shopping developments that sit along the San Antonio Creek channel. 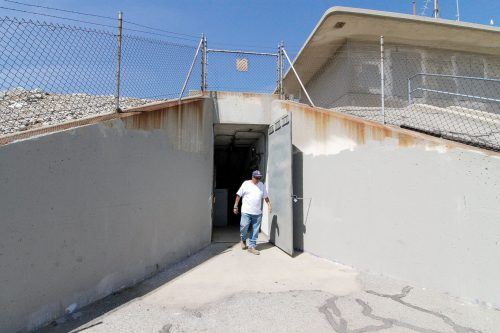 Robert Espalin oversees the day-to-day operations and maintenance of the dam and has worked for the Army Corps of Engineers since 1991. / photo by Spencer Croce

Amazingly, San Antonio Dam is just one small part of a much larger system designed to protect the residents of Southern California from flood waters. According to Al Clark, professor of humanities at the University of La Verne, who has undertaken extensive research on the San Gabriel watershed, “We so infrequently think about floods. There is a high likelihood of another flood. The 1914 and 1916 floods were the turning point in control doctrine.” That is when Southern California flood control measures started in earnest, he says. While recent drought conditions have pushed water-based catastrophic events out of our collective memory, flooding is still a real and active concern. The foothill communities from Fontana to Pasadena are all built on top of an active flood plain. Although dry for most of the year, the steep San Gabriel and San Bernardino mountains can shed an incredible amount of water in a short amount of time, which tries to find its way to the ocean. The Army Corps of Engineers, in coalition with a host of state, county and municipal agencies, work to ensure the safety of millions of people during rain events. 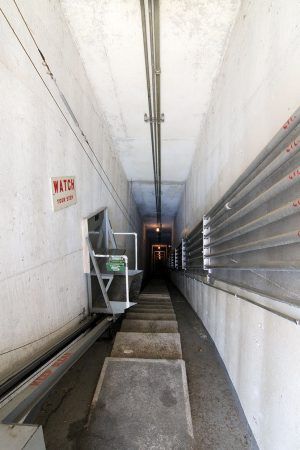 A narrow corridor leads down inside of the San Antonio Dam and descends down 150 feet from the top of the dam where the hydraulic control cylinders are located. An electric lift winch is used to transport workers and tools down the long stairs. / photo by Spencer Croce

For now, San Antonio Dam is a relatively quiet dam, having received only 10.7 inches of rain in the last year as measured on the on-site instrumentation. During dry seasons, the dam undergoes more time consuming and sensitive maintenance. April 2018, the hydraulic control system underwent a total overhaul, with the draining and replacing of 1,100 gallons of hydraulic oil, and the replacing of the indicators.

According to Louis Munoz, dam operations supervisor of the Los Angeles District, the San Antonio Dam is also slated to become the new Army Corps of Engineers base of operations for the Santa Ana River system. The control center building, with its space for heavy equipment storage, will be built right at the base of the dam, a sign of the strong faith in this guardian of San Antonio Canyon.

And while the dam does not have water in it now, the systems are always being tested. Espalin points to a picture in the control shack office of the dam at its high-water mark, which came within a few yards of the spillway threshold on Feb. 19, 1980. It is a reminder that the San Antonio Dam needs to work perfectly when under an active load. For dams like this, there is no second chance. “We are actively maintaining the dam,” Munoz says, with a reassuring smile. ■ 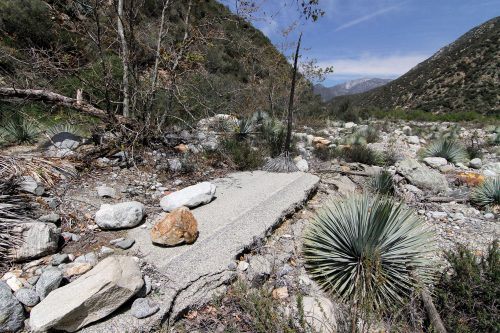 Remnants of the old Baldy Road with original center line paint from 1938 are still visible after a short hike from Shin Road. Debris has washed over the road, and plants have sprouted up along the old road bed. / photo by Spencer Croce 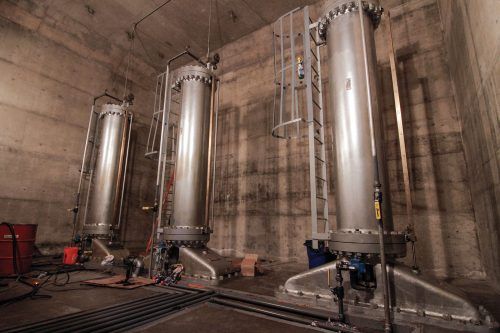 San Antonio Dam has three control gates that are controlled by three massive hydraulic cylinders. While they normally operate at 200 psi, they can exert up to 800 psi if the channels become blocked. At the time of writing, the hydraulic system was undergoing a complete overhaul, which included draining and replacing the 1,100 gallons of hydraulic oil. / photo by Spencer Croce 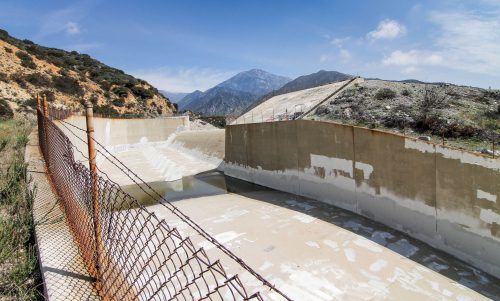 The spillway is constructed on the western end of the San Antonio Dam. The structure was completed in 1956 by the Army Corps of Engineers, who still oversee its operation. / photo by Spencer Croce 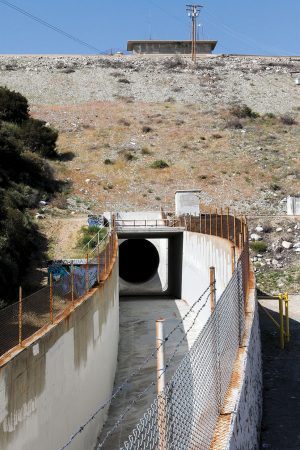 San Antonio Creek Channel emerges from the base of the dam, directly below the control shack on top of the dam. / photo by Spencer Croce 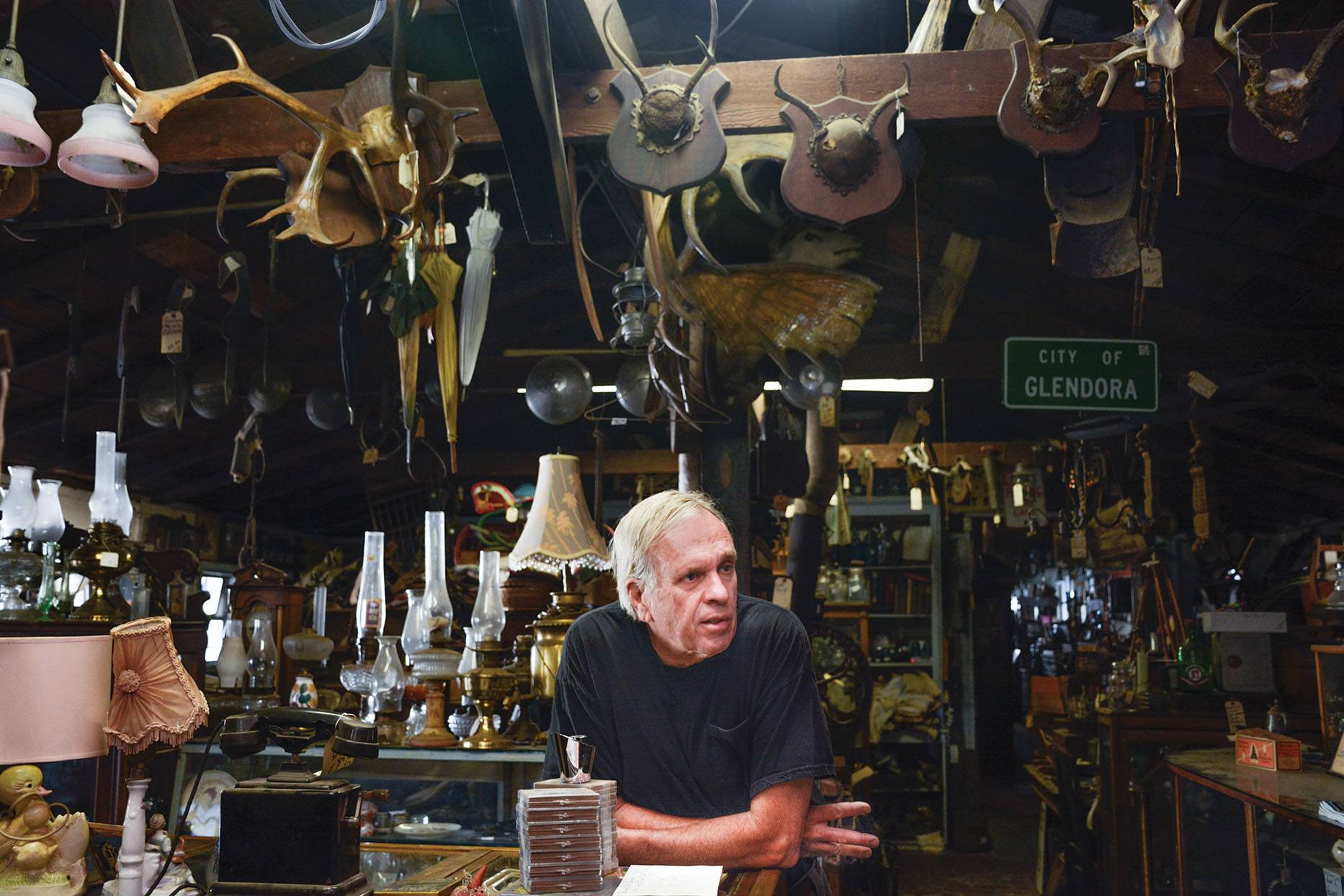 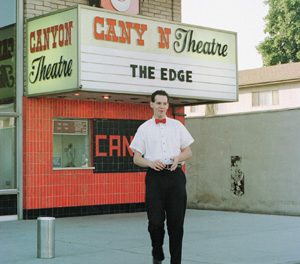 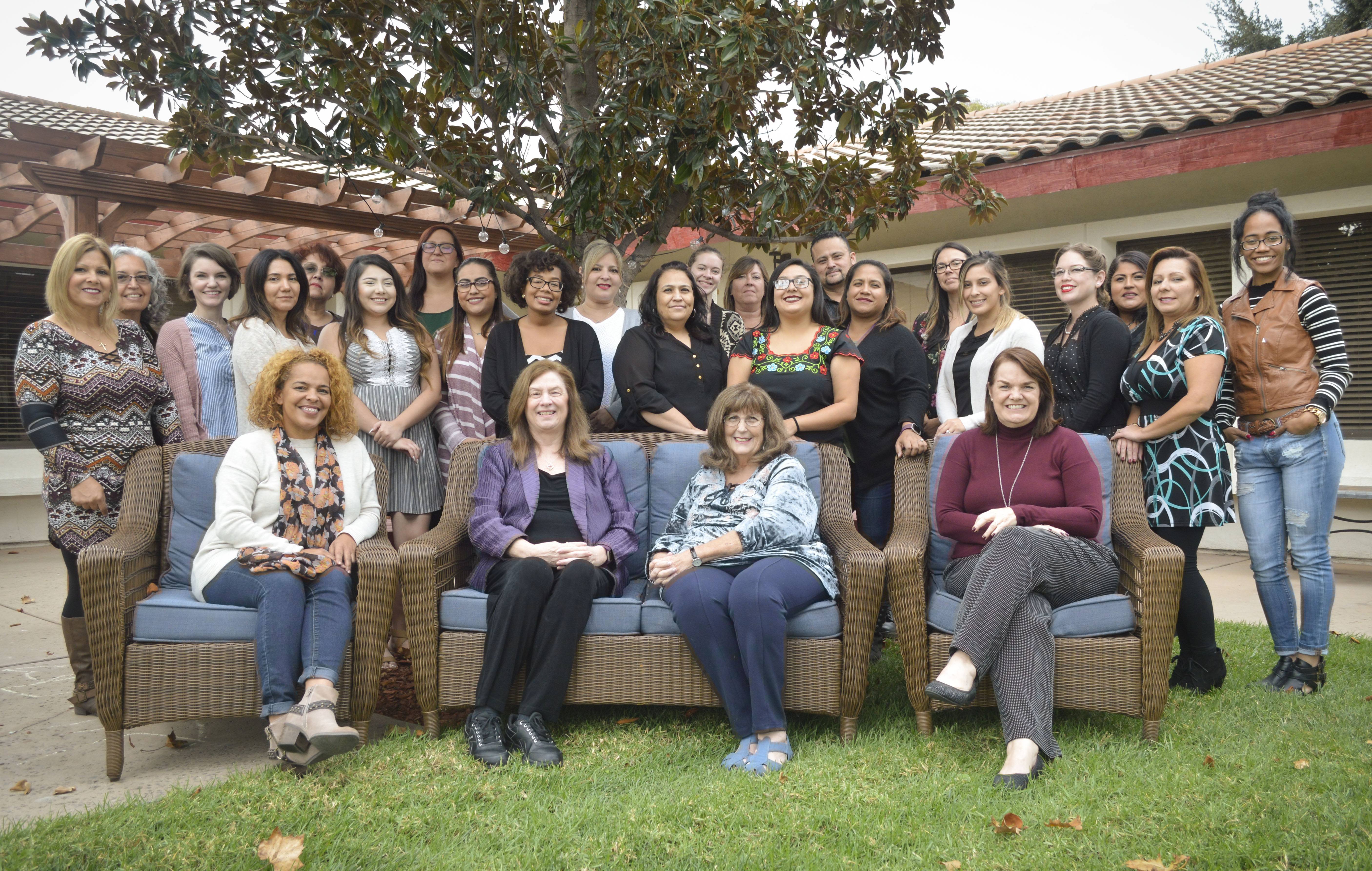