Aoki Still on a Roll after 20 Years 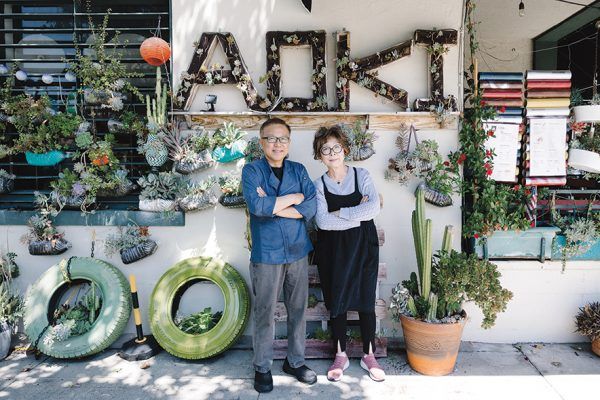 The more than a century old First National Bank of Lordsburg building is transformed by Miki and Mike Choi’s unique garden motif into an inviting Japanese restaurant that beckons diners to come in and enjoy good food paired with great company. / photo by Jingyao Liang

Nearly 20 years ago, in 2003, Korean natives Mike and Miki Choi opened Aoki, a Japanese restaurant on the corner of D and Third Street right across from the city of La Verne’s Mainiero Square. Fast forward to the present: Aoki still stands as one of the oldest and most beloved family-owned businesses in Old Town La Verne. People don’t just go back for the food. They often return for the hospitality of the couple who are not long on words, but whose sincere actions speak louder than any conversation.

Mike Choi and his wife came to America in 1998 when he was in his 40s. Mike’s friends live in Diamond Bar so the couple initially settled there but eventually moved to La Verne and made the city their residence as well as work town. Why the restaurant business? Mike simply says with a reassuring nod, “I’ve liked cooking since I was young.” He shares that in Korea he owned a Japanese restaurant with many professional chefs. Overtime, he was able to learn from his chefs and further developed his passion and skills for the cuisine.

That the Chois choose to cook and serve Japanese cuisine despite being Korean is not counterintuitive; they simply say it was for convenience. “There’s too much competition for Korean food, and I feel like Korean food is not for every American,” Mike says. “Japanese sushi is popular in America, and I eat sushi a lot too.” He shares a reflective comparison of how Mexican restaurants in America are the equivalent to Japanese restaurants in Korea. “There are a lot of Japanese food places in Korea.”

The restaurant name Aoki translates to “green trees” in Japanese. Miki says that the name was already there when they purchased the restaurant so the pair decided to keep it. The building, once the First National Bank of Lordsburg, circa 1910, now matches the green aesthetic with its garden exterior. At present, Aoki is the most eye-catching restaurant in downtown that embraces nature—and also emphasizes a recycling theme with its re-purposed tires, bicycles and watering cans. From afar, one can spot the walls of green succulents and plants that were grown and decorated by Miki. “I started having a few succulents and cacti for fun; then it became a hobby,” she says. “For the last 15 years, I have been growing plants all around the restaurant.”

Miki has an eclectic taste in music. One might be surprised that an Asian restaurant is playing country music–a staple at your local BBQ joint or American diner. And while Miki says, “Actually, I just let the playlist play random music; I don’t have any particular music preference.” Apparently, Alexa believes country music is what she wants, because it always answers her call for “music” with country. The music quickly becomes forgotten, as it is when one watches a movie. It simply enhances the experience. 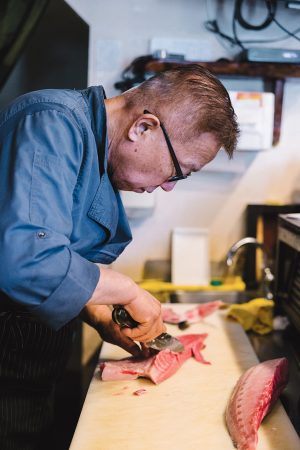 Being the sole workforce of the restaurant, the couple can be seen taking breaks and eating their meals at the restaurant when business is slow and before they lock the doors for the night. “A lot of times, we eat Korean food since we are both Koreans,” Miki says. “Dishes like bulgogi and kimchi stew are frequently eaten, but we like to eat our own sushi and sashimi too.” Bulgogi, a marinated “fire meat” beef or pork, is also on the menu. “It is the hardest to prepare because of the long marinating process,” says Miki. “A lot goes into the marinating.” Miki adds that salmon is her favorite. If a person came in and asked for her favorite meal at Aoki, Miki says she would prepare salmon sushi for them as she emphasizes it is fresh and delicious.

It is tough to run a sushi restaurant, but through the years, Miki and Mike manage to strive for an “A” on the door but they admit there were times they faced critical judgments. “With 20 years of experience, things become easier. We had rocky moments too, but we adapted to short staffing and kept working diligently. We order fresh fish twice a week, follow safe hygiene and constantly work on making sure freshness is our priority,” Mike says.

They say at least 30% to 40% of their customers are from the University of La Verne. When University members come here, they say they love the ambiance, the plant decorations and the hospitality of Miki and Mike. Miki says many students become the restaurant’s regulars. “Many of them come back with their families and children later in their lives,” Miki says. “Recently a group of students visited us, and they are in their 30s now. They used to sit at the patio and do sake bombs on Fridays.”

As a business that has been in place for almost two decades, the Chois have seen many changes, not just within their restaurant but also in their surroundings and neighbors. “There are a few stores that used to be here. There was a long-standing flower shop across the street from us. They closed about a decade ago. The restaurant right next to us changed at least three, four times. The place right by Circle K changed a few times too. The competition doesn’t affect us much because we are capable of running on very low staffing so our expenses are not stressfully high,” says Miki.

They have a daughter and son, both in their 30s, and both pharmacists who work at a hospital. Both practically grew up in the restaurant. Now, daughter Julia Choi and son Jay Choi help their parents out with technical details such as creating ads and menus, and subscribing to food delivery apps. “When they started, Aoki had more items. Back then, they had more staff too. As they were forced to cut staff dramatically during the recession a decade ago. My parents removed a lot of items from the menu as well, so they could manage the menu with low staffing. For instance, we used to have pork cutlet and chicken cutlet. We removed the pork cutlet and now only carry chicken cutlet. Some of the rolls that require a lot of preparation were removed as well. We streamlined the menu so we can handle it with ease,” Julia says. “I think we adapted quickly and made drastic changes when drastic changes were needed. There were definitely difficult times when bills were backed up. Cutting staff, cutting the menu, and quickly adapting to technology like online ordering apps like Uber Eats and DoorDash were some of the things we did.”

As for the future: Mike Choi affirms, “As long as my body is good, I’ll be here. For their customers that is good news. For now, Mike and Miki’s robust strength matches the quality of their food. Those who enter the restaurant are guaranteed to have a great experience, with the ambiance, with the food and with the two hospitable hosts. ■ 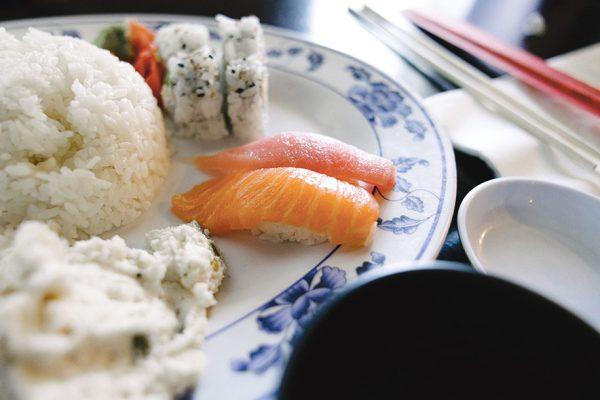 Fish for many recipes on the menu is ordered twice a week to ensure flavor and freshness. Salmon sushi is a favorite for both customers and owners Mike and Miki Choi. / photo by Jingyao Liang

Hien Nguyen is a senior journalism major at the University of La Verne. 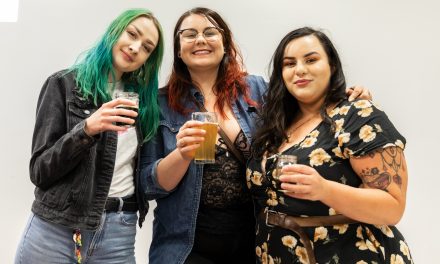 Brewing Good Will: A Witches’ Guide 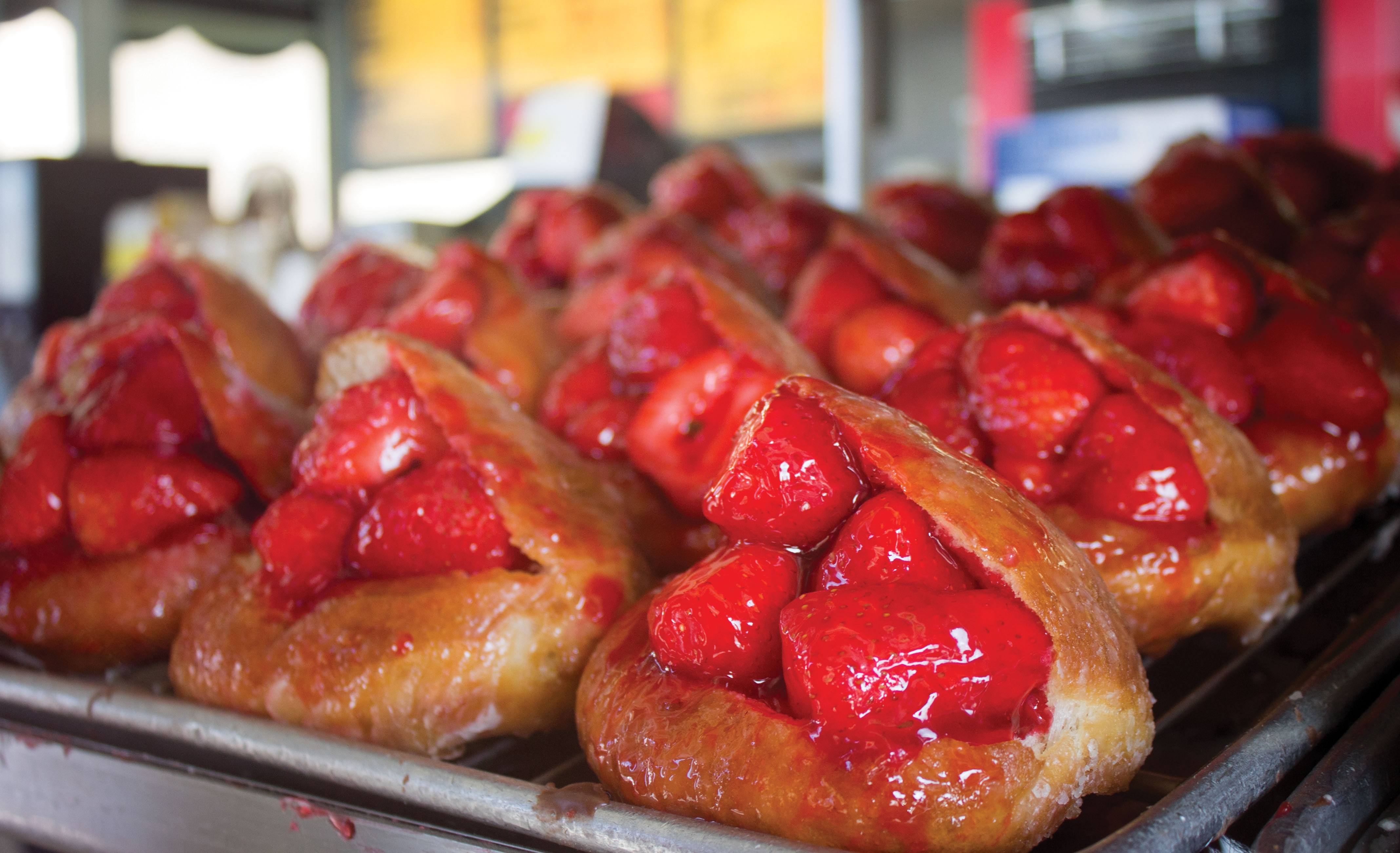 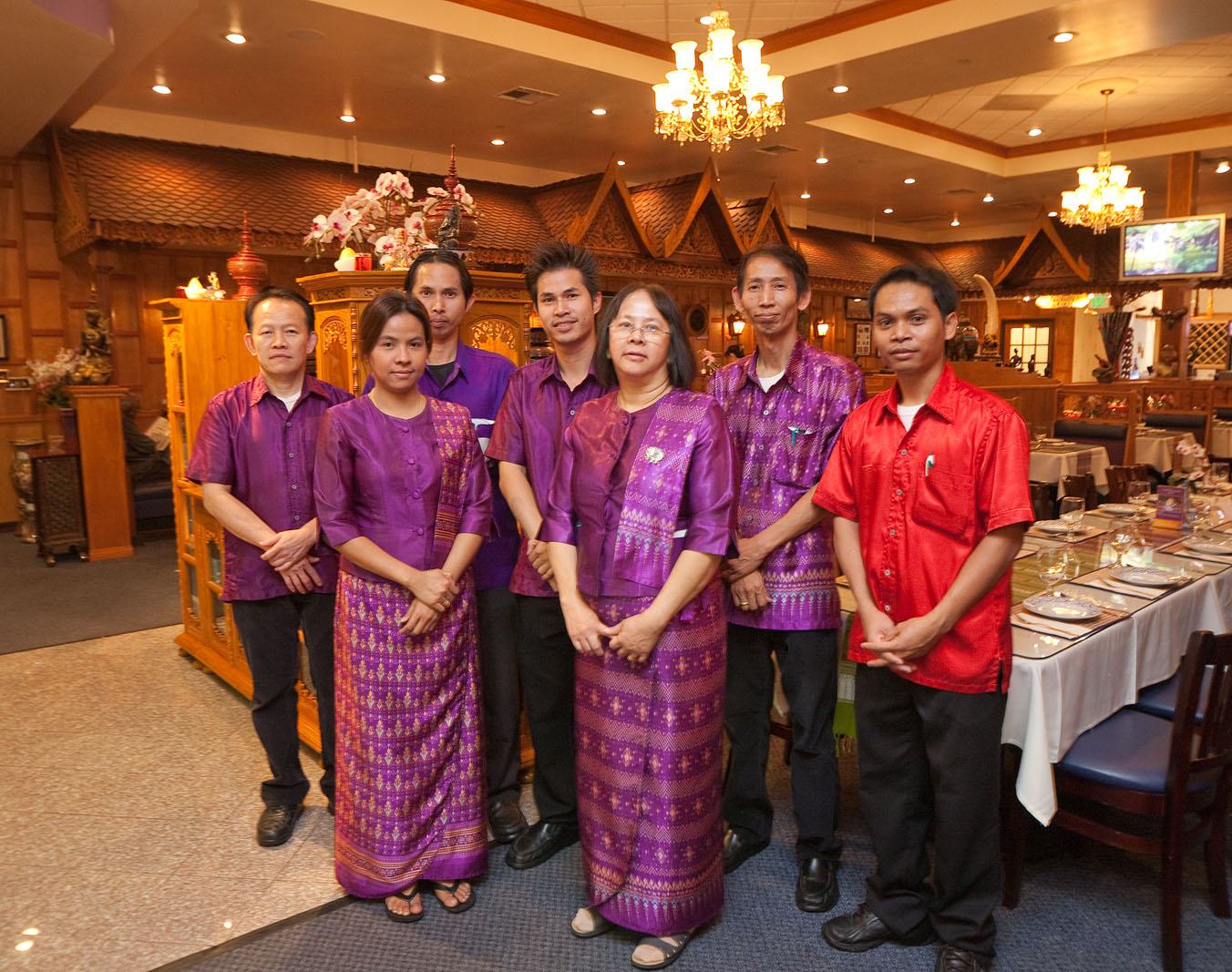 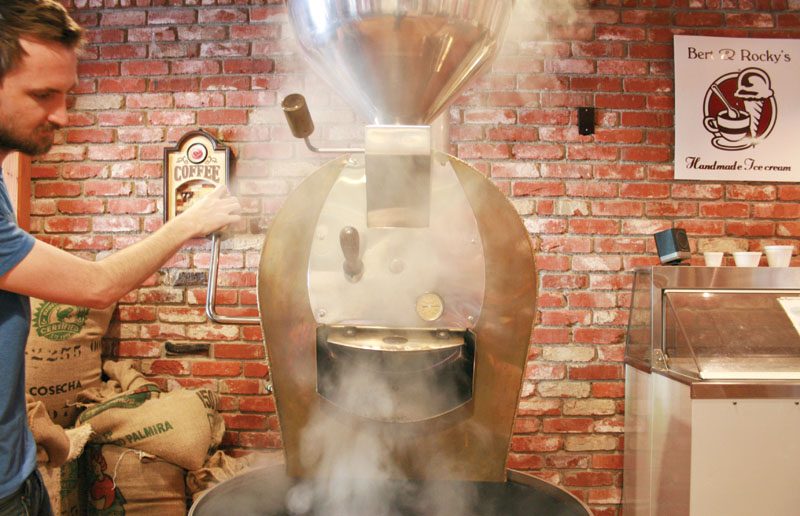